Extremely slow WebDAV sync on iPad, while fine on iPhone

I’ve capitulated and am moving my sync stores from iCloud to WebDAV (Fastmail). This worked fine for my first device (iPhone) my 7.8GB Resources database was synced in about an hour including all content 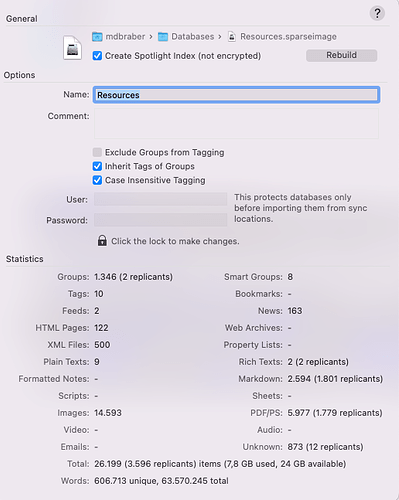 I then did the same on my iPad which when fine, until somehwere half-way I encountered "Error: “Couldn’t write silent worker context to volume”. I removed the sync store completely, re-added it and tried again, but again it failed somewhere half way. I searched the forum and found this topic with suggestions from @BLUEFROG to run some URL commands that could fix these errors: Error: "Couldn't write silent worker context to volume"

I’m now running the sync and it’s progressing, but it’s excruciatingly slow. It’s taken ~24 hours and isn’t even half way. I’m not sure if it’s trying to merge things or something else is happening. Any idea how to sync to iPad without “slient worker” errors and at normal speed?

In DEVONthink To Go, select ? > Contact Us to start a support ticket. Thanks!

I will Jim - thanks.

Fastmail throttles band width at some point meaured by bytes/some unit of time. check their documentation. you probably have hit that limit.

Yes - I think that might have been it although it also was still happening 24h later and my limit is 160,000 items up/downloaded (my DB is ~25,000 items). I’ve tried again today and it seems to be working now so far. Thanks for the pointer and possibly a good reminder for everything using Fastmail.

ok, but the webdav server at fastmail knows nothing about Devonthink items. it’s all bandwidth in bytes or bits per time. it it was when i hit those limits in the past.

To the best of my knowledge items in database ≠ items in sync store. The sync store does not contain a bit-for-bit copy of records.

That is correct, especially with larger files which will be chunked for more reliable transmission.

Note the “hourly” and “10-minute” limits which I suspect you are hitting.

I also had the idea of using WebDav on Fastmail, but the limits stopped me. I now sync everything with a Synology NAS WebDav and Bonjour (while at Global HQ), and a small “Works in Progress” database using Dropbox for when “out and about”. Everything catches up.

Thanks for these clarifications @BLUEFROG @Blanc @rmschne. I hadn’t realized that chunks would indeed add to more up/downloads. I’ll see if I can get some insights on to what extent I’m hitting those limits with Fastmail. It would be a shame if I would have to abandon WebDAV with Fastmail for that reason.

Fastmail’s WebDAV isn’t really fit to do the type of data serving that DEVONthink needs to sync. Their business focus is on mail.

There are other WebDAV third party service providers out there which will allow bigger pipes for your data.

Do you really need such big third-party internet facing service?

If so why not use what is known to be fit for service and works (except for Apple’s services which has been shown to be less than reliable for some)? Would save a lot of hassle and questions.

The number of files/folders used in sync stores can be quite different, DEVONthink doesn’t upload each file on its own (e.g. large files are split to allow resuming, independent of possibilities of cloud service/server, and small files are merged).

I don’t know what this WebDAV service costs you, but maybe a local NAS running WebDAV is an alternative.

It’s included in my account I already have (which includes mail, calendar and files i.e. WebDAV). I’ll try using it for a bit and see if the limits pose a problem. A self-hosted WebDAV is indeed definitely another option.

I’ll try using it for a bit and see

I’d kinda expect that following the initial sync the limits you seem to be hitting should be less relevant - perhaps you could report back in a few days.

Why must you use WebDAV? Alternatives for third-party internet-facing services not working? I am wondering why the technology matters at the expense of working.

I was originally using CloudKit, but as has been reported it’s (unfortunately) far from reliable and rather slow at times, so I’m trying to find a better sync alternative (I’ve excluded Dropbox)

Internet search on “webdav service providers” comes up with hits. They probably don’t have the bandwidth limits of Fastmail. Bonjour is good to me.