False duplicates continues to be an issue

As I had initially reported here in March 2017, DTTG has had a tendency to report files as duplicates even when they are not.

This continues to be an issue in 2.6.2. All of what was covered in that March 2017 thread continues to be relevant, including attempting all fo the troubleshooting described there. In the year since that post I’ve done plenty of database verification, I’ve re-established sync, including moving from Dropbox to iCloud, I’ve completely remade databases (e.g., starting a database from scratch), and yet I still get false duplicates. This affects both of the databases I have in DTTG.

Currently there are 22 duplicates reported, all of which are not actually duplicates (and yes, I’ve checked every single one of these, and no, they aren’t duplicates of trash items).

Across two databases I have 1968 items, the vast majority of which are PDF and Markdown files.

Do any fellow users have suggestions? Any more insights from the DEVONtech folk into why this might continue to be happening, even with brand new databases in brand new sync stores?

The original support ticket was #179523 which may have more details for the DT Folk.

We provided you with a dedicated beta roughly a year ago that included extended logging for this issue. Could you please reopen the ticket with updated details from your side?

(Also, I didn’t intend to be snarky by saying “a year ago” or anything like that – this problem honestly just fell off my radar until recently after I switched to iCloud and was using DTTG more frequently again. I also know that this problem doesn’t seem to be at all widespread and I appear to be an edge case, so I had no expectation that this would be fixed “by now” or anything!)

I just added a bunch of statement of accounts downloaded from my brokerage and ran into the same problem. Tried optimizing, repairing and rebuilding the database, didn’t resolve my issue. I ran the individual files on MD5 hash and they’re truly different so I have no idea what’s going on.

We have this on the screen here and hope to have a fix eventually.

I have an odd little issue, in the Duplicates smart group I have 3 entries. 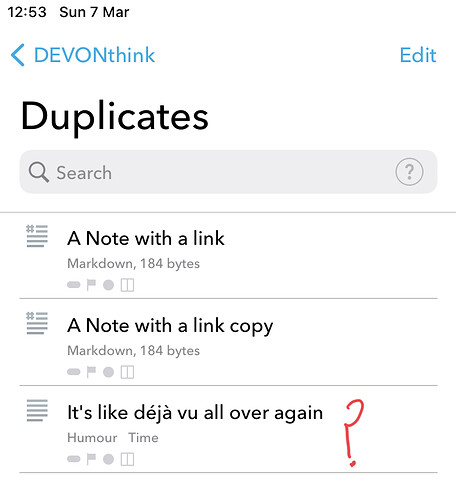 The first two make sense to me in that one is pretty much a copy of the other.

However, the the 3rd entry is odd. It doesn’t relate by name or content to the other two entries here, but there are only 3 entries present so what is it a duplicate of?

It’s all in the title

Please start a support ticket and attach the three files in question so we can test if this is reproducible outside your environment. Thanks.