The Files app integration is not working at all. It always shows “Content Unavailable” after a flash. 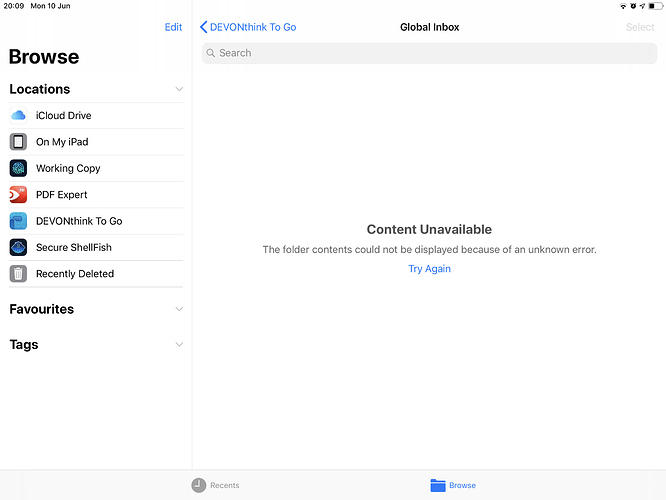 Do you have DEVONthink To Go’s Settings > Security enabled and set to lock Immediately?

I have all Security settings off.

Do you have ungrouped JPEG files in the location you’re trying to access?

I’m wondering if it’s because of the relatively “big” number of files in a single directory (169 items). Smaller database loads fine.

That could well be. The Files app is known for notoriously killing connections to file provider when they use just a little bit of memory too much. Which is not very much, actually.

I think I figured out the reason here. I tried adding various files into a new database to see when the Files app shows “Content Unavailable”. Here are some observations.

When adding an image file (tested with jpeg and png), the Files app shows “Content Unavailable”. But usually after tapping “Retry”, it goes back normal.

However, for some larger images (over 5mb), it shows the files for a brief moment but then keeps showing “Content Unavailable”, after tapping “Retry” repeatedly. I think it’s because the Files app is trying to generate a thumbnail for the image but couldn’t succeed for some reason. I managed tap on those images and open them with the brief moment I got. When I close the it, the image got a thumbnail and Files stopped showing “Content Unavailable”.

I hope this could help you to solve the problem. I know you are busy developing the new Mac version. But please give DTTG a little maintenance. Thanks in advance!

I fear the reason is that the Files app kills a file provider when it’s using just a bit more memory than a few megabytes. So we’re thinking about precalculating thumbsnails for Files instead of building them on-the-fly.

I have the same problem and it is a JPEG image of 736 KB creating the problem. When I move it the problem moves.

Thanks. This agrees with other tests we have conducted. Cheers!

We have changed the way previews are calculated which should fix the problem with the Files app.

Thanks for the fix! I’m wondering if this will be released into App Store soon. I have been checking for updates of 2.7.2 since it’s mentioned like two weeks ago. It would be great if you could let me know that it’s still work in progress so I can stop checking App Store.

Yes, it‘s still work in progress. We might mention the next update even though it is not ready for prime-time.

I wonder if there’s an update on this issue.

I’ve ran into some trouble. Files app shows the available folders on my db from the browse window (see first img) but when I access a folder which within DT2G contains downloaded PDFs (2nd img), only 1 from 40 PDFs is currently shown.

For background, I set up PDF Expert because I’m still experiencing the PDF markup issues described elsewhere (Apple Pencil PDF markup issue). Last week Files App could see the entire contents in that folder (a mere 66MB though part of a large db). Today Files app shows me only one file, which means I can’t access any of my material for marking up.

A strange and possibly related thing is that Files reports that the relevent folder ‘! To Read Research’ was last updated ‘Today at 08:35’ (I worked with these files all morning in DT2G so there is new data available). Another oddity is that the ‘Recents’ tab on Files App does show some PDFs from the relevant folder because they were open last week.

Is there any way to update this manually and force Files app to retrieve the contents?

I’ve noted @eboehnisch references to memory problems particularly on older machines. I’m on a 5th gen (2017) iPad so RAM may be insufficient? Then again it all worked seamlessly for me last week. I’ve killed all apps and restarted the iPad twice, to no effect.
Thank you! 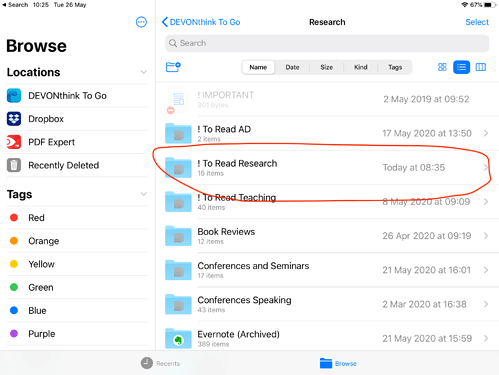 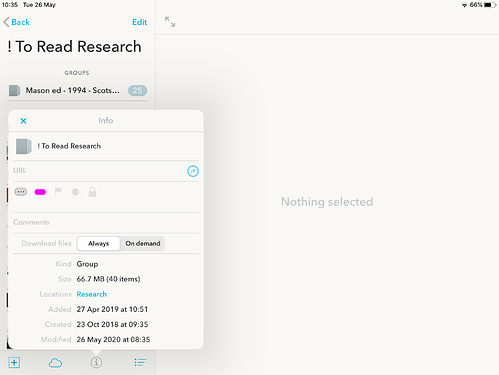 Does it simply not list anything in that folder or do you get any error messages? Memory could be an issue. For the Apple Pencil problem we’ll have a fix with the next public version of DEVONthink To Go.

Thanks – no error messages, but Files listed only 1 out of the 40 PDFs saved to that folder. Strangely though, and without any fiddling on my part, I’ve reopened Files this mornign to check and now all content from DT2G is once more visible. Maybe it will be that pesky memory issue which I take it results from iOS and so can’t really be helped. Perhaps it’ll ultimately persuade me to upgrade hardware! I’ll keep monitoring the situation, thank you!