How i can move a document into group with keyboard shortcut?

I need oftly the “move to…” feature, but i try to use the keyboard whenever is possible, because its more efficent. But, i don’t have found a way to to this without mouse. Is this right?

My wish is a shortcut, where a list alike the one with from the dialog with right-mouse-click (see attached image) 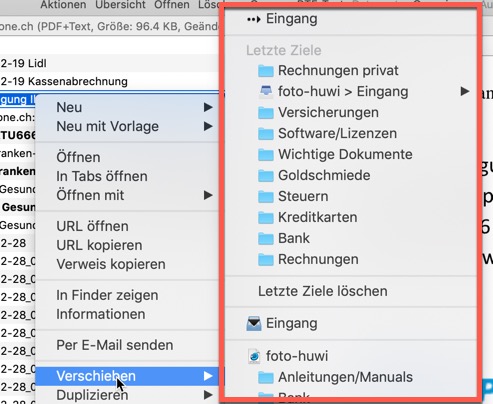 In Help > Support Assistant > Install Extras > Scripts you will find a script “Move with Keyboard”. Install that script, and it will appear in Scripts > Data as “Move”. Because that script now appears in the menu bar as a command, you can give “Move” a keyboard shortcut in System Preferences. (Instructions here.)

This script uses the global “Groups and Tags” display to show you all the groups in open databases – the scripts intent is to provide the broadest scope possible for cleaning up the global inbox, for example.

If you want merely to access the smaller “favorites” list which is accessed via “Move” in the contextual menu, then you would need to use a utility like BetterTouchTool, which is capable of assigning shortcuts or trackpad gestures to contextual menu commands in apps.

Otherwise, at this time, there is no method like the one you suggested.

Perfect… thats the solution! Thank you very much and happy 2019!

If you want merely to access the smaller “favorites” list which is accessed via “Move” in the contextual menu, then you would need to use a utility like BetterTouchTool, which is capable of assigning shortcuts or trackpad gestures to contextual menu commands in apps.

When I access “Move” in the contextual menu, I dont get a smaller subset of “favorites”… I see all groups from every open database. Is this the expected behavior?

Have you specified any Favorites?

Have you specified any Favorites?

Yes, screenshot of Favs attached. All of my databases inboxes are marked as favorites.

When I select the Move script, a dialog box of every database and group pops up. 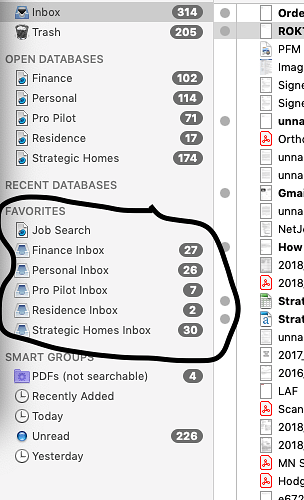 This has nothing to do with the Move script, so what you’re seeing when you run the script is the expected behavior.

Has the script moved?

There’s no such script available in the support assistant of version 3. Use e.g. Data > Move To… instead.

I only see these options in the Data Menu

It works alright. I really wish that there was a way to say that I am focusing on processing my inbox. That could open up the possibility for assigning keystrokes to move commands and tags like the old iPhoto keyword window. I’m not getting faster at moving things into DevonThink. I realize that, in time, I won’t be pulling so much in at once but I plan to process enough that I will be at it for months even if I could speed things up.

I only see these options in the Data Menu

It’s located in the Data menu, not in the Scripts > Data menu.

Thank you! That is an improvement over the script.

It would still be nice to be able to type a ‘1’ or something when that window is on screen for the favorites or the top ten in the list or something.