How to save a pdf to DTPO from inside Adobe Acrobat?

Is there a one step procedure to save a document from Adobe Acrobat Pro DC direct to DTPO3? Printing to pdf doesn’t work because when accessing the Acrobat print dialog (“Save PDF to Devonthink”) it kicks out the Saving a PDF file when printing is not supported. Instead, choose File > Save message. So I have to save to desktop or somewhere else and then drag/drop into the DT sorter. I tried grabbing pages inside the Acrobat sidebar but that doesn’t work either. TIA.

Use the add-on feature for Global Inbox in Save Dialogs

New user questions: In or From DT DEVONthink

Maybe off-topic to the original question, but you could also use the Global Inbox in Save Dialogs add-on to get stuff into DEVONthink as a move instead copying: [Global Inbox in save dialogs] I personally only use an alias I created for the global inbox on my desktop to move stuff into DT. The path is below: [Path] Right-click the Inbox and make an alias, which you can then drag to the desktop or anywhere else. I added a nice icon and it looks like this on my desktop: [DT Alias]

Thank you. I had no idea that was there.

Hello…That worked for a while, but docs I put in there are no longer getting into DT. Is there some command or setting somewhere that I need to toggle?

Do you use the Finder sidebar or did you create an alias on the desktop?

In case of an alias on the dektop, it might be an option to recreate that. I remember aliases not working as expected in Catalina, not sure if Bug Sur has that issue as well.

In case of the Finder sidebar, restarting DT might help. I once noticed something similar with a few documents still in that folder. Restarting DT fixed that. So, take a look at that folder as well:

At the moment nothing. I’ll close DT and restart and see what it says.

Did you happen to rename the alias in the Finder’s sidebar?

No. I just dragged it as is with current name (“Devonthink Inbox”) from ~>Library>Application Support>DEVONthink 3 into the sidebar.

Also closed all open db’s, then closed out of DT, reopened, reopened db’s that I was using.

Are there documents in that folder when viewed in Finder?

as is with current name (“Devonthink Inbox”)

Based on my experience today, I probably renamed the alias back when chrk first responded, 2 years ago, and crippled it. I don’t remember doing that but I have no doubt that I did.

So what CAN I call it? I have 5 or 10 folders on my HDD called “inbox” so that’s a useless name. I tried creating an alias from inside library. It created “Inbox alias.” When I put that in the Finder sidebar it won’t allow me to use that alias as a move target. Functionality crippled. Drag/drop ignores the alias.

Then I tried adding “Inbox” to the Finder sidebar from the library and renaming THAT in the sidebar, but it renamed the original file in the library and again crippled the functionality.

So as far as I can tell, the only thing it will allow itself to be called while maintaining the functionality is “Inbox.” Any other name seems to cripple the function.

I don’t know what else to try. Maybe Big Sur or some other Apple brainstorm broke it but I don’t know.

I don’t think you can rename the original folder or the sidebar favorite in Finder.

But there is a workaround:

Remove the Finder sidebar entry via right-click & “Remove from Sidebar”.

Navigate to your DEVONthink application support folder and create an alias via right-click. 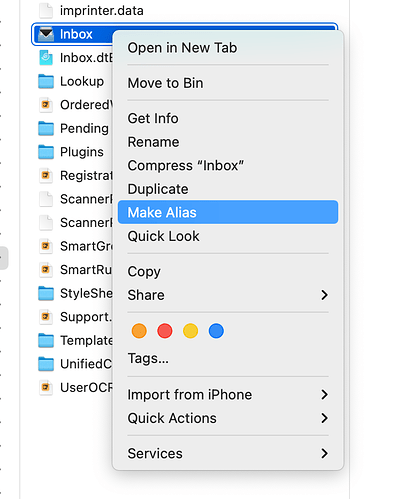 Drag that alias “folder” anywhere or leave it in its place.

I dragged it to the desktop for easy file dropping, renamed it and gave it a nice icon. 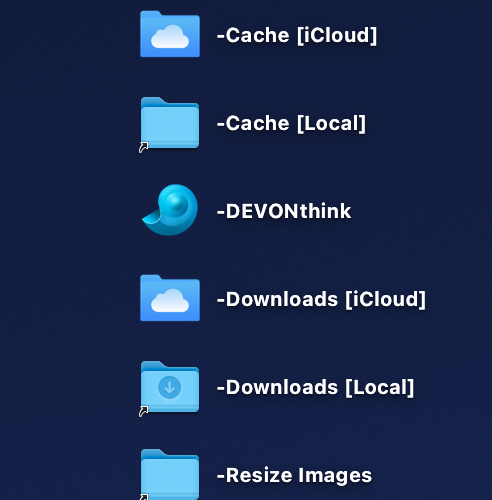 Whatever you do with this alias, it can be renamed and can also be dragged into the sidebar.

You can save files directly into it as expected.