How to work in other apps and see changes in DTTG

so, bit of a dummy question here, but how can I edit a file that is in DTTG to go in another app and see the changes afterwards in DTTG?

So far, I’ve tried that share button and sent the document to another app, but the changes afterwards did not appear in DTTG.

If this is more helpful, I want to sign some PDFs in PDF Expert and have those old and now signed documents then stored in DTTG.

This is dependent on the external application. Not all support the Open In behavior. And not all play nicely with changes they make. PDF Expert is one that is problematic as it appears it may be caching changes in such a way that it’s not affecting the original file in DEVONthink To Go.

PS: If you send a document to another app, you’re copying it. There is no connection between the copied document and the original in DEVONthink To Go.

@Hummalte The release notes for v3.0 state that open in place is not yet working:

Open-in-place does not (yet) work with, e.g., PDF Expert.

…which would otherwise be the way to go (i.e. opening PDF Expert and using the Files browser to access DTTG documents). As a workaround, you can share back the signed document from PDF Expert to DTTG.

Maybe @cgrunenberg can comment on this? maybe it would be technically possible to refresh the pdf view in DTTG if the user switches back to the devonthink app (e.g. after a file has been edited in another app)? this would help a lot…

If the other app uses the appropriate mechanisms to notify the originating app of the change, DEVONthink To Go refreshes the view. But we could, of course, add another check for, e.g., the file modification date, just in case.

To repeat what I just added to another thread on this topic: I’d like to add that this works with the PDF-annotation apps Highlights and PDFPen on iOS. But I couldn’t make this work with PDF-Expert, as indeed noted above. Only thing is: you have to close the annotated file in the annotation app, before you return to DT. Then, within DT, you have to switch out of the document view and back in again, for the annotation to be visible (and thus saved within DT). This is still not as it ‘should be’, but very much workable and much quicker than digging around in the document provider. Both are iOS annotation apps I can endorse by the way, with Highlighs also offering the possibility to additionally save your notes and annotations to DT as a separate file.
Have fun!

I have tried the new “open in app” feature for DTT3 in Goodnotes and LiquidText, but the highlights and annotations I make in both apps never show up in the original PDF housed in DT. I’m not sure what I’m doing wrong, but is it possible to get a step-by-step process that you all have had success with? (I should add that the PDF I open in the third party apps retain a copy of the annotated PDF–not sure if this is a sign that something is going awry or if that’s working as intended.)

If I understand correctly, each piece of software in the iOS universe decides its behaviour with regard to sharing and opening (in place), so it’s possible the two pieces of software you named simply don’t behave as desired. But just to check: rather than just tapping on their icons in the share sheet, have you long-pressed and selected “open” rather than “share” (see page 32 of the DTTG 3.0.3 manual)? Again, some software behaves the same regardless of how you call it (on my iPad, both Excel and Acrobat only offer “open” and not “share”; annotations I make in Acrobat do then appear in DT once I re-open the file there).

Yes, that’s correct. I’m long pressing and using the “open in app” feature rather than the “share with app.” Other responses in the DTTG forums suggest Goodnotes should work. If neither of these two apps do work, is there a list of apps that it does work with? I only ask because I’ve only seen a few apps discussed in these forums.

Edit: When you share to Acrobat and Excel, does it keep a copy of the PDF after editing? Does that mean it exists in two places and any further edits done in the third party apps would continue to show up in DTTG?

It’s possible that I’m being dense here, but I’m just not seeing the open-in-place feature. Here’s a screenshot of what I get when I long-press a document: 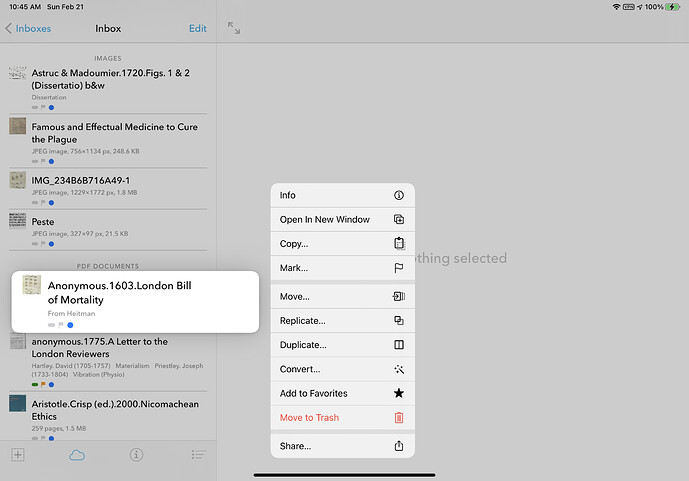 In case it’s not clear, the document that I’ve chosen is a pdf, and I’m working from within DTTG 3.0.3

Hm. What about “Share” at the bottom? Same icon as in other apps… may be…

Tap on share to get the share sheet. There long press on the icon of the app you want to open with and select (if available) open. Apps will generally offer open and share or either one on its own.