Hi – Per the title. I’m seeing

On my iPad and Mac as it’s attempting to sync. On iPad it’s a notification. On my Mac I see this in the log.

Once I see this error, it looks like syncing stops there, and when it tries to start again immediately stops. 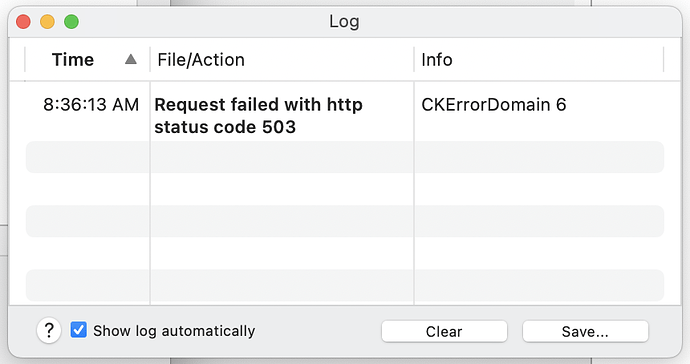 How are you syncing?

This is with the new iCloud (CloudKit) sync.

HTTP 503 is a temporary error (“Service unavailable”). How large are the databases you’re trying to upload and how fast is your upstream?

Several thousand files. I can upload at about 900mb/s.

This might be the reason why the connection was throttled by Apple’s servers. You could try reducing the number of max. connections (see Preferences > Sync).

Do you know what the limits are? Also, if Apple limits are asymmetric? As in are uploads throttled more than downloads?

I think at a limit of 1 sync thread, with lot of pauses, it seems ok, but will take a long time! I can leave it at 1 until everything is uploaded from my main Mac. What do you suggest the limit be long term?

Do you know what the limits are? Also, if Apple limits are asymmetric? As in are uploads throttled more than downloads?

Downloads are usually not throttled (also true for Dropbox), only uploads are. I tried to reproduce this and uploaded 3 databases containing approx. 34000 files (meaning lots of upload requests) but didn’t experience any issues (probably due to the slower upstream). Apple’s servers decide actually whether and when throttling is applied, maybe it depends also on the location and which data center is used.

I am getting CKErrorDomain 7, is the same cause?

How big are the databases you are syncing?

My database are around 7GB with around 3k files.
I don’t know if that matter but the arround appared around the movement I started switching wifi networks (I wanted to use faster wifi, the first time I switch DT crashed then I tried to reproduce it to post here, but it didn’t happened again)

EDIT: After a moment sync problems happened again, maybe my network was too fast

Restarting DT and switching to slower network helping me

Some are a few GB.
My classes DB is about 1GB
My Cisco is 2 GB
Work and mail DB are under 1 GB
Personal DB is 2.3
My reference DB is 7 GB

And how many files approx.?

At one point I used to crash Apple Notes all the time a few years ago, I think I was the cause of a lot of the stability updates with Apple notes since I have a few thousand notes.

After a moment sync problems happened again, maybe my network was too fast

Restarting DT and switching to slower network helping me

How fast actually? Right now the CloudKit sync uses the recommended retry delays returned by CloudKit after errors, maybe these are not sufficient for very busy data centres?

I don’t know, the provider of network is the same, but the one on which the upload is blocked is supposed to be faster one, 5GHz (and is actually faster)

I am installing Ookla speedtest to report it

The faster network works around 1min , then sync fail

I am currently located in Belgium.

I’ve set to 1 sync thread only, and I can see in DevonThink (bottom right), I’m uploading 1 file at a time very slowly. Like a couple of seconds per file. I’m still getting rate limit errors and seeing long pauses where DevonThink isn’t doing any syncing.

I am in the U.S. NE region, so could be routing to a busy datacenter.

I have all of these same symptoms. Just reduced my Max Connections to 1 to try and get stuff uploaded as I’ve already cleaned my Legacy sync store. I am in the US SE region, if that helps at all.