When I copy an image from (e.g.) Word & paste into a Rich Text file I get a hyperlink to the image. Can this be more user-friendly? Why can’t I (or how can I) just copy and paste the image?

Also, if I drag an image into a Rich Text note from (e.g.) my desktop I can’t seem to adjust and crop the image? Surely there’s an option, right? A thread from 2009 mentioned the “Image Edit” function.

Place multiple photos in a DevonThink-created "document"
cgrunenberg October 2, 2019, 8:11am #2

When I copy an image from (e.g.) Word & paste into a Rich Text file I get a hyperlink to the image.

What kind of link? What does happen if you paste the same image into a TextEdit document?

Also, if I drag an image into a Rich Text note from (e.g.) my desktop I can’t seem to adjust and crop the image? 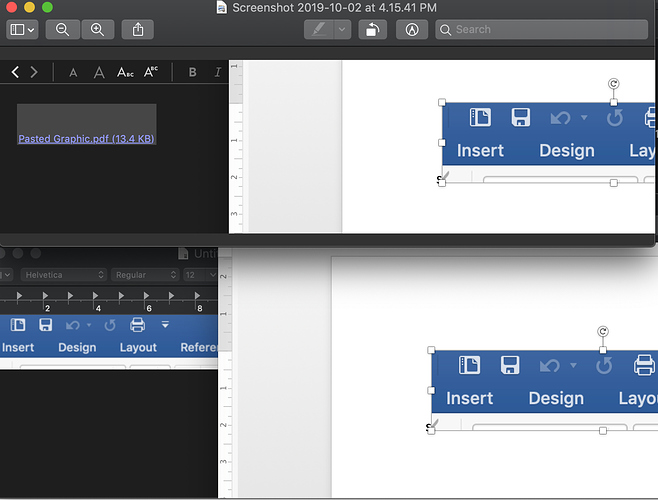 PDF documents are optionally displayed as attachments, this can be changed in Preferences > Editing.

There is an option in Preferences > Editing to resize to the document width, but images should ideally be resize before adding to documents. 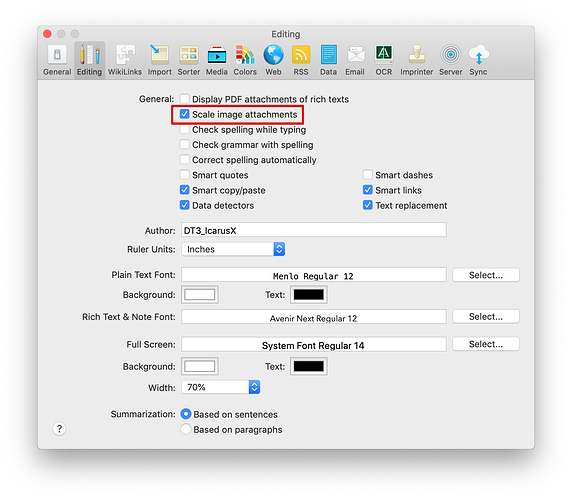 In DT3, there is a little arrowhead in the upper right corner that allows me to use external tool, like Markup. And while Markup is nice, is there a 3rd party app that would work here to resize the image from within DT3?

Just curious, do you know if there’s some technical reason no one’s made an image resizing extension like that?

Nope, I don’t.
Perhaps because you can double-click an image in an RTFD file to open it in the system default app and save the changes.

So simple I didn’t even think to try. :shamed:

Just curious, do you know if there’s some technical reason no one’s made an image resizing extension like that?

Well. Circus Ponies’ NoteBook did that, years ago. MacJournal still does that, today. So, the technical difficulty can’t be that great.

Well. Circus Ponies’ NoteBook did that, years ago. MacJournal still does that, today. So, the technical difficulty can’t be that great.

These are not comparable applications. They are independently developed with a sole purpose of creating notes, just as Microsoft Word or Adobe Indesign are built for their specific purposes.

you can double-click an image in an RTFD file to open it in the system default app and save the changes.

Yes. That’s an approach. I have been able to resize two photos and put them side by side in a Rich Text DT document.

Question, though: if, as suggested, you double-click an image, it opens in Preview; if you then display the Preview Markup toolbar, there is a “resize” button there. Which you can use to resize the photo.

But in DT, if you right-click on the photo, and select the Markup option that is presented, it does NOT offer the resize button. Could that be added to DT???

These are not comparable applications.

Hum… Not a compelling argument, in my opinion, if I may say so…

As mentioned in another thread, the DT documentation does mention “its advanced text editing capabilities”. I know, I know, it does say “text editing”… Still…

It would be nice to be able to eliminate the need to access an outside program for some basic functions.

FWIW, with regards to images, two functions that I would personnally like to see are: the ability to display as an icon or inline (à la OmniOutliner, Mail, etc.) and the ability to resize, expressed as a % of the original, the instance in the document, without affecting the original, of course.

Hum… Not a compelling argument, in my opinion, if I may say so…

RTFD is a standard (an ancient one, from the NextStep days) which is not controlled by DT. There are no “extensions”, and if there were, other programs like TextEdit would not know what to do with it.

Technically, someone could fudge something together that could allow you to rescale images in a DT “RTFD-plus” editor, and parking the original-size images somewhere in the RTFD package together with a DT-only instructions file. I think most would agree that fooling around with something like that is a nonstarter.

And comparing with proprietary, standalone, apps like Circus Ponies et al., is a double nonstarter. Might as well have mentioned Word and Pages. The point is that RTF(D) is special because it is super-simple and an editing engine is available inside of DT. I suspect the latter is the main reason why we still use it.

No. This is not our extension. It’s Apple’s Markup extension.

The basic point is about UX.

It would be very cool if in the future the user had some ability to resize, crop, and move an image in DT notes without leaving the note. Resizing an image outside the note disturbs workflow

I totally get that the DT notes are not the same as Word or similar applications. But… that doesn’t synch up with how users experience these applications. I said goodbye to Word as my primary application to write and store long & short-form notes AND came to DT.

Maybe there needs to be a new “note” that’s more user-friendly to integrating media?

It shouldn’t be read as some kind of achievement when someone says (on this thread) “I was able to place two photos side by side” (after fiddling around with the images for 5 minutes in another window?). This is pretty basic in terms of UX even if technically we can mention XYZ until the cows come home.

The basic point is about UX.

The even more basic point is that one needs an editor engine beneath the UI to make this actually work. As I tried to outline above, this does not really work with RTFD as a format.

This is in my view a problem with the surprising lack of an open, versatile (“Word-lite”), simple, but widely used and accepted rich-document format on Apple devices. RTFD is too simplistic and an ancient dead end, and there is a wide gap before Word-class products kick in, which are too bulky to be integrated as an engine into a 3rd party product like DT, even if they would be in principle openly available such a LibreOffice.

DT recognized this issue and years ago introduced alternatives:

In the end, I dont’ use RTFD anymore. If the note is simple enough to be typed out in text-only RTF, I do that and love the speed and ease to edit within the DT main panels. If I need just a bit more it’s off to Word or Pages. And the really fancy stuff goes LaTeX, of course.

As the Formatted Note is HTML, changing the displayed size of an image is as simple as adding "width=“x” height=“y” to the IMG tag. It would be super-awesome if this was capable from within the Formatted Note. E.g., right clicking on the image and having an option to enter/change these values (either directly or by percentage).