In the light of the current DTTG 3 file corruption debate I was reminded yet again how difficult it is to establish a sound backup strategy without a mac.

Therefore I wanted to ask if anyone figured out a backup solution for their iOS/iPadOS only setup?

I have not personally tested this, but apparently iOS 13 supports backups to an external drive. 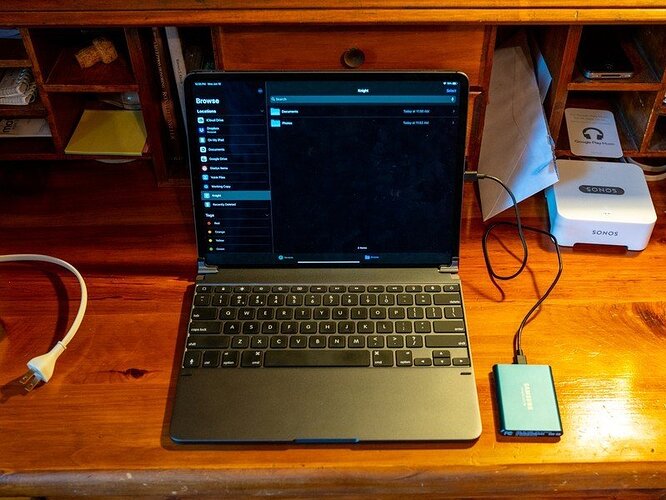 In the upcoming software updates this fall, you'll be able to plug a hard drive directly into your iPhone or iPad and transfer files to and from it. We show you how.

I believe Apple’s official answer is “Give money to iCloud.”

Thank you for your suggestions!

Unfortunately copying more than a handful of files or groups to other apps or any location in the files app (including external media) fails. Due to limitations in iOS’s file handling(?)

I would happily pay Apple / backblaze or any provider for zero-knowledge encrypted and versioned cloud backup. Unfortunately, (aside from not being zero-knowledge and not offering versioning) using Apple’s iCloud backup means I would have to nuke and completely restore my entire device to restore a single corrupted file.

I’ve had no problem copying files from the DTTG folder to another folder in the files app. I then zip it all up and upload to a cloud service for safe keeping. I could go to external storage, but it’s slower than cloud in my current setup.

I would be perfectly happy with a manual workflow like this!
Do you copy only individual files or entire groups/folders as well? As an example I would like to copy an 1.3GB group/folder containing 2055 objects which so far failed every time I tried.

I copy all the folders within the DevonThink folder. This seems to require a keyboard, as the paste command does not come up in Files with a long press, but a command-v does work. A drag and drop should also work, and the files should be duplicated in the new location instead of moved because they are originating from a protected space. It can take a while for everything to paste over, but I’ve had no errors. I am only copying around a half gig at a time, so that may be a factor. Perhaps you can try a subset of folders to see if it is the size of the copy/paste that is the problem?

I presume you don’t require a mac to make backups if you create a sync store on a NAS, and backup that NAS with to a local HDD/RAID or some cloud backup.

It would depend on the backup software of the NAS whether the backups are incremental and whether you can restore from a specific moment in time. Writing over the same file would result in the backup of missing data, which is obviously not the purpose.

Perhaps @BLUEFROG could comment on backing up a (local) sync store as an alternative to backing up from a macOS device?

Note: Sync is ​not ​a backup, neither advertised nor advocated as such. A backup should be application agnostic and file-based. Sync uses raw, chunked, and optionally encrypted data only for use with DEVONthink and DEVONthink To Go.

DEVONthink To Go cannot sync to a local sync store.
Due to iOS’ backups not allowing for individual file restorations, you can use sync as an ad-hoc backup but that is not the intended use of syncing.

But what would be a good solution to backup a whole DTTG-database?

It depends on if a Mac is involved or not.

If a Mac is involved, syncing between DEVONthink To Go and DEVONthink, then letting a proper backup strategy do the backups.

Sync is ​not ​a backup

I understand that, but a sync store on a NAS contains all files required to download to an iOS device, correct?

If one creates incremental backups of the NAS, why wouldn’t it be possible to restore from a backup sync store?

DEVONthink To Go cannot sync to a local sync store.

With ‘local’ I mean on a home or company network, i.e. not requiring internet.

If one creates incremental backups of the NAS, why wouldn’t it be possible to restore from a backup sync store?

It’s of course possible and I use this actually. But it’s not recommended as the only backup solution. In case of important data offsite backups (e.g. cloud or bank) are also highly recommended.

Thanks for confirming that. Fully agree it’s not the preferred route, but the question was: how can a user of DTTG backup without a macOS?

My ‘internet free’ proposal therefore was to make incremental (that’s important of course) backups of the sync store as iOS itself doesn’t allow for continous backup solutions beside the internet. But solely relying on some cloud storage can involve risks on its own, as can relying on onsite backups alone of course.

I would hope there’s a way to export a zip of the database from DTTG. Is this currently possible? If not is there any plan to add it?

No this is not currently possible and there is no short list plan for it. It is however on our (very long) list of possible future functionality.

As I understand from this thread, there’s no way to properly back up DTTG database without involving a mac. The only options are full device backups and copying files manually. Is this correct?

iOS backup and DEVONthink sync are alternatives i can think of but sync is of course not a real backup.

Well I guess I could make copies of the synced database in the cloud as a backup?

no. the files there are not databases. for sync use only. maybe you can version the files but i wonder value.

If I have those chunked files, then I think should be able to let DTTG sync from it and recreate the database. Is this not correct?