Is a Mac Studio justified?

Reading through the forums, I get the feeling that increasing total RAM seems to have the most bang for the buck for DEVONthink on the Mac. Given that the Mac Mini is capped at 16 GB, it seems Apple is forcing migration to the Studio if we want 32GB or more. I can sell that to myself, but I am a little less confident if I should move to 128 GB considering it requires the M1 Ultra CPU first. This leaves me with a few questions that aren’t exactly new to the forum but might have changed since were last asked.

I feel really silly considering the Studio given I don’t do any video or audio work. Other than DEVONthink the hardest task I imagine I would throw at this machine is Grammarly. I review may document formats (pdf, word, obj, xls, ppt, etc). But concern I will regret the RAM limitations of the mini has prevented me for ordering anything.

Other details that might be relevant. I expect I will have 7 TB of databases by 2023. Right now they are broken into half TB-ish databases (although I would love to end that practice) sitting on external SSDs (either 2 TB m.2 drives or 4 TB SATA).

I find the RAM helps in order to run mutiple apps without getting a beach ball.

But I do not note a meaningful difference in performance specifically in DT3 between my desktop Mac Pro and my laptop Macbook Pro.

I think RAM was much more important before SSDs became standard on Macs. I don’t think it makes that much difference now.

I do like the Mac Pro in order to be able to use multiple monitors and to expand internal storage - which secondarily help when using DT3. But I do not see a high-end Mac as being all that important in basic DT3 single-monitor performance as long as the Mac has an SSD as its primary storage. 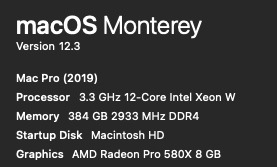 Out of curiosity, what are the specs on the MBP? And, do both Mac’s have the same size databases?

This is the MacBook Pro 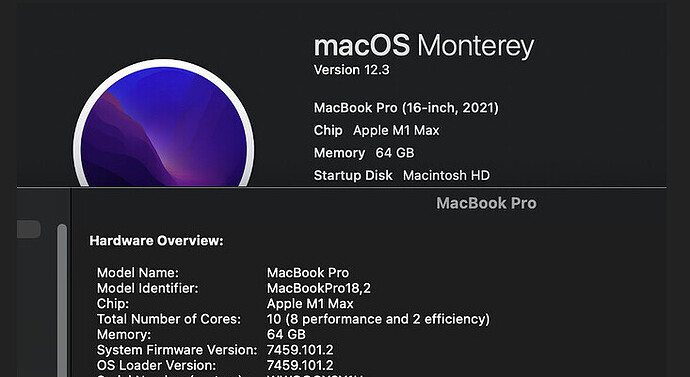 It replaced a MacBook Pro which I kept for quite some time because it was the last model before the butterly keyboard fiasco and I did not want the butterfly keyboard.

I sync the identical databases on the two machines using a Synology NAS - this is the largest of the databases: 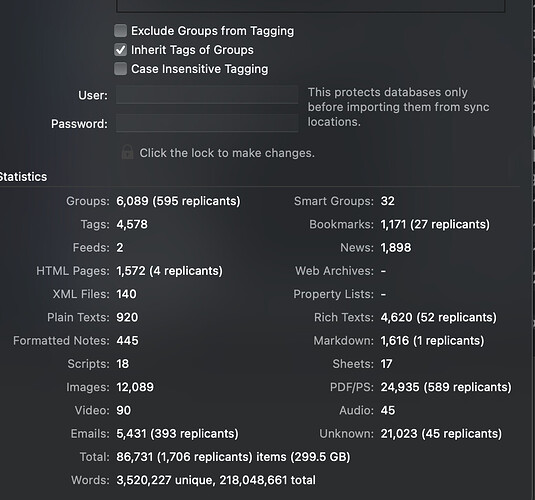 On my older MacBook Pro, it was harder to run a large number of apps simultaneously but if I stuck with just Devonthink, Chrome, and a few other basics, it was fine. And of course I did not connect 5 monitors to either MacBook Pro.

Also of note… despite the specs of the Mac Pro desktop, it still takes quite a bit of time to combine large PDF files using DT3.

I love the Mac Pro for its modular design with regard to internal storage and its ability to run multiple monitors. But I think its processor capability is overrated except if you run software specifically intended to utilize its capabilities such as high-end video editing software; there is a reason Apple loves that for its demos.

I think your MBP is something of a hybrid Mini and Studio in terms of specs. That provides some insight into my first and second questions. Thank you.

If it hasn’t been done already, at some point maybe I or someone else should construct a set of shareable databases that people could run some general tests on. There must be a way to provide some sense of comparison between hardware.

If you want to post a test database and some metric of tasks to run I would be glad to do so on both computers.

In terms of future-proofing I believe largest internal SSD you can manage is the best investment to be able to continue long-term use of any Mac which does not have the capability to upgrade its original drive. I doubt many people will wind up frustrated they they didn’t buy the next faster processor speed or more cores; but buyer’s remorse is distinctly possible by running out of SSD space.

If I can build something it likely won’t happen in time for my own benefit, but for people who come after with similar questions.

I can see the SSD issue. My thinking was to get 1 TB internal for the OS and a OWC ministack and toss in an 8 TB SSD and either a 2 or 4 TB m.2. It’s pricy but still cheaper than Apple’s build-to-order pricing.

If you plan to do that be sure to read the specs/reviews closely. There are some non-obvious (at least to me) factors involved in internal SSD installation that go beyond the stated Mb/s Read/Write speeds.

This is the BlackMagic speed test on the main SSD for my laptop MacBook Pro. Its SSD response is double that of the original SSD on my dektop Mac Pro and 5-10 times faster than real world speeds for the OWC ministack you are considering. I think the SSD speed is more of a factor than almost anything else in terms of DT3 performance. 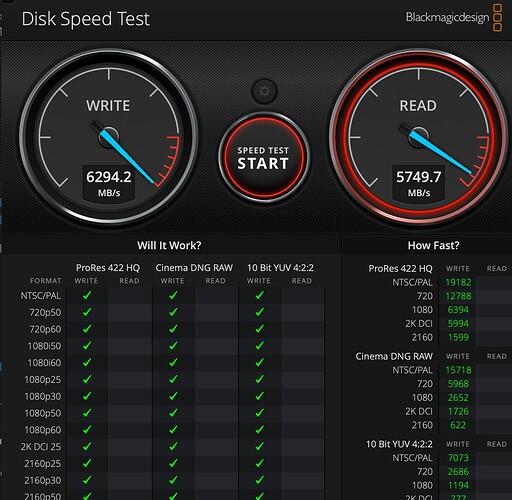 How do you get so much RAM, I didn’t think you could get that much on a mac? I thought you could only max out at 64GB which I have, for no good reason to be frank. I find DEVONthink 3 works beautifully on my Mac though I must say, I don’t know why really and I have it running all the time now and from my point of view it is integral.

Hmmm. Well, the reason I was looking at the OWC solution was that it’s thunderbolt 4 and because I already have a stack of unused 980 Pros. I ordered an 8 TB Samsung 870 QVO because of the drive capacity. I know it won’t be m.2 speeds, but I can’t find high capacity m.2 outside of PNY. I am really unsure of them after reading about how they made hardware changes without changing model numbers. Otherwise, I am stuck with 2 TB drives. OWC has external m.2 raid solutions, but I assumed I would lose bandwidth within the cable.

Thanks for the reply, I had no idea: that is like another Universe.

My experience with my M1 MacBook suggests that 16 GB of RAM is plenty for using DT; the only thing which ever takes any time are some of my scripts - that’s due to my inefficient coding and the stunning lack of basic features in AppleScript. Nothing I do is slower on my MacBook with 16 GB RAM than on my (up to date Intel) iMac with 64 GB RAM, and in all the MacBook actually feels faster. I use DT intensely daily.

The size of your databases is, I believe, not relevant - the number of entries, however, may well be.

I certainly would not be going for a maxed-out Studio (or any other device); I believe you pay a serious premium for doing so, money better invested in a new device a few years down the line (if necessary at all). If I were currently in the market for a new Mac, I think the connectivity might be a greater selling point for the Studio than the RAM options. Although I admit to simply liking new and shiny things, which might push me towards the Studio

the stunning lack of basic features in AppleScript

Am I sensing some unhappiness here with this wonderful language? Just let me know if you’re looking for help in getting converted.

While this may seem off-topic, this is the part I have questions about…

I expect I will have 7 TB of databases by 2023. Right now they are broken into half TB-ish databases (although I would love to end that practice)

Why, why, and okay let’s talk about ending that practice.

This is an older discussion which includes some real-world numbers for Thunderbolt 2 SSD performance.

The current Thunderbolt 4 in the Studio is at least in theory 40Gb/s which may come close to but not quite match the 6000 Mbps performance of the native SSD in the MacBook Pro (which is probably similar to what is installed in the Studio).

If you can truly get 5000 Mbps or more from a Thunderbolt 4 SSD connected to a Studio then that should be close enough to the performance of the native SSD. I am not certain if it will really work out that way in real life. It would be very interesting to see some real-world numbers.

Expert news, reviews and videos of the latest digital cameras, lenses, accessories, and phones. Get answers to your questions in our photography forums.

It’s my classes and work. I take, on average, 27 credits a semester. I have been doing that since 2010, and I expect I will be done in 2024 +/- a year depending on employment options after graduation. (I have a very specific interests, and the luxury of being able to pursue multiple degrees). I also have a company that generates content for medical schools. So I add about 30 to 40 research papers a day, plus daily images, documents, and videos.

I find there is a lot of overlap and I end up wanting to access most databases each day. It’s the auto-link to files that I find so useful because it allows me to generate a wiki with my own data. For example, some pharmaceuticals have alternate names and that can really throw me when reviewing documents.

To help me compare your experiences with rkaplan, would you mind sharing more details about your database?

The Mac Mini has two Thunderbolt 3 ports as opposed to the Studio’s four Thunderbolt 4. I don’t know how that translates into DT3 performance, other than it limits the number of external drives I can attach.