Is OCR completely disabled in the DevonThink Pro 3 demo/trial?

I’ve downloaded and installed DevonThink Pro 3. I want to test out the OCR capabilities.

I’ve found that the menu for OCR appears to be inactive now. 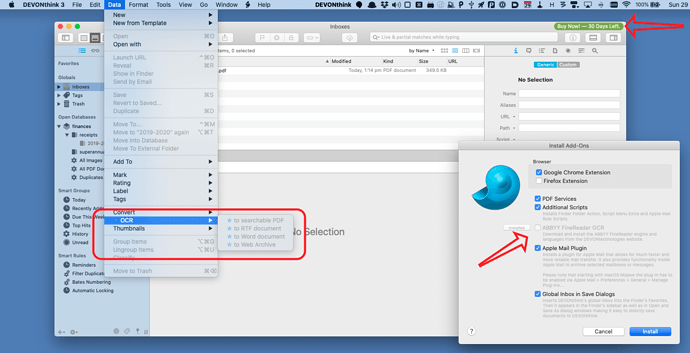 Initially choosing the menu appeared to recommend, via a popup dialog box (IIRC), that I should install the OCR software. I closed the dialog box, but nothing appears to be installed.

Further, when examining the installed add-ons, I see that ABBYY FineReader OCR appears to be excluded from installation.

Is there a restriction with the demo/trial version that prevents testing the OCR capabilities at all?

I’ve searched the forum for relevant questions and answers, and I see questions about restrictions to scanning in the demo/trial version. Fair enough. But I haven’t seen any that say that the OCR feature is completely disabled in this mode.

I have the DevonThink Pro 3 installed on a 2018 MacBook Pro, running macOS 10.15.2. The scanner I have attached is a Fujitsu ScanSnap S1500M (using VueScan - because 64bit). I have a document scanned successfully with the scanner and sitting in my Global Inbox - all good - but how to OCR?

Weird @s5b as I have been doing tests with OCR during the trial period of DT3 over the past couple of days.

Worked very well indeed, no issue at all.

Let’s see what the good guys at DEVONtechnology might say.

Thanks for the encouragement. It’s good to see that it should be possible.

Another small thing, but maybe related to this issue.

In the top right of DT3’s window I see that you have a 30 day counter, while I had a 150 hours counter instead.

I wonder why there is such a difference.

Could it be that you had a beta version of DT3 installed before on the same machine, maybe?

EDIT: quite possibly this is NOT an issue, rather a feature of the trial. It’s 150 hours or 30 days, whichever comes later.

Back on the "Three" wagon - it's great! Feedback

After having tried DT3 and having gone back to DT2 for a little while I now jump again on the “Three” wagon - and I have to say: It’s great! So clean. So responsive. A delight! Here one little thing for you about the trial notification: The first window shows this: [25] The second one (opened just a minute later) displays: [17] This doesn’t look consistent to me… %-) (Not a problem for me because I will upgrade soon in any case – just have to decide whether I go full Server or not…) Again…

Interesting question. Today is the first time I’ve ever downloaded the software, and installed it. I’m not sure why I would have a different style of counter from the one you had with your copy.

Perhaps DEVONtechnologies have changed their approach to trial licensing.

Thanks again for the response.

Just edited my last message, precisely as you were typing your answer.

Maybe the 30 days is not an issue after all, but I wonder if you have seen the 150 hours counter or not at all. Go figure!

There is a daily limit on the number of documents that you can OCR in the trial version.

Thanks for the reply; much appreciated.

Yes, I saw that there is a limit in some of the other posts here on the forum. I understand that it is to stop abuse of this feature by people with no intention of buying the software - and fair enough, too.

From my reading of the other forum posts, there appears to be a daily limit set on the number of OCR conversions. I expect I’m well within the limit.

In my case, this was the first and only document I have loaded into DevonThink Pro 3. So that’s a bit weird.

I do have a trial version of the stand-alone ABBYY FineReader for Mac installed on my machine, separately. Maybe FineReader is getting tangled with the embedded ABBYY software. Who knows? ¯_(ツ)_/¯

I do have a trial version of the stand-alone ABBYY FineReader for Mac installed on my machine, separately. Maybe FineReader is getting tangled with the embedded ABBYY software. Who knows?

That is a very likely possibility.

Since that is also a trial, could you remove it and see if DT3 proposes to install the engine?

I’ll give deleting the trial of ABBYY FineReader for Mac a shot.

Okay … I’ve deleted all trace of the stand-alone ABBYY FineReader for Mac from my machine, emptied the trash, and rebooted.

Restarted DTP3, and selected Files > Import > Images (with OCR)… from the menu. Then I selected a previously scanned PDF document in the subsequent file dialog box.

The result is an OCR processed document in the Global Inbox. Which is great!

Not sure what the problem was previously. I did have some unusual window behaviour with the application where I couldn’t resize the DTP3 window prior to the reboot.

Thanks to everybody for your ideas and assistance.

The trial version only allows 20 OCR operations per day (to limit abuse).

However, also make sure you have a document that can be OCR’d selected. It’s clear from your screen capture you have No Selection.

I’ve been using the OCR quite effectively since my original post; thanks to all who replied.

So much so that I’ve bought a license for DTP3.

Now, to get down to business.