I am having this same issue others had on my iPad os. read most of the posts and tried the suggested fixes. No luck. How do I fix this? 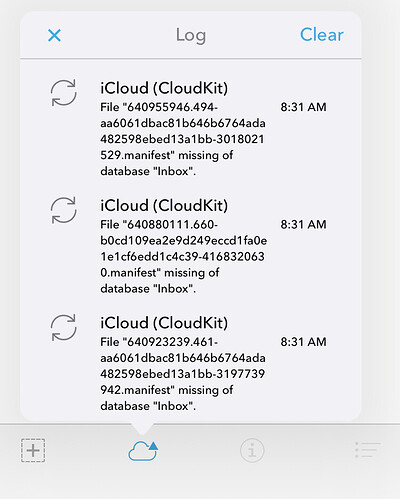 You didn’t say what fixes you tried. What did you try? Did you see Help > Documentation > Troubleshooting > Sync Issues

I did the following. On the iOS/iPadOS:
Uninstalled (deleted) the app completely. Reinstalled, and reconnected to the iCloud Sync.
On the desktop and macbook Did a verify database throughly, several times, removed and re-added the sync location several times. this is such a pain and a frustrating experience, I am sure it is all user error…

Now I see that my Global inboxes are not syncing. OS the top level Inbox in Global Inboxes supposed to sync across devices?

Re the Global Inboxes, for me they sync, but I had to turn on syncing for that “Inbox” folder on all devices I wanted synching to occur. Have you turned on?

Apple’s iCloud Sync the “older” way. Have you tried the newer Apple sync engine “CloudKit”? Best to ensure two cloud sync engines active on same db’s at the same time as you work through this experiment?

Note: removing and reinstalling the app is a last resort and rarely helps anything (and might make things worse).

Note also. I use Bonjour as it’s faster and very reliable. I use WebDAV to a local NAS because sometimes my iMac (which I consider the “master” and accepts incoming Bonjour connections) is sometimes sleeping. I also have Dropbox running on one small database just to “keep it going” in support for when I can get back on the road travelling. I also use CloudKit on another database (not the same as sync in Dropbox) just to ensure it works so that I can say it works here. I do not do iCloud.

Re the Global Inboxes, for me they synce, but I had to turn on syncing for that “Inbox” folder on all devices I wanted synching to occur. Have you turned on?
- Sync is on. And looks like it is syncing (date and time stamp)
Apple’s iCloud Sync the “older” way. Have you tried the newer Apple sync engine “CloudKit”? Best to ensure two cloud sync engines active on same db’s at the same time as you work through this experiment?
-I am using the new CloudKit. ALl devices are on the CloudKit.
As suggested in “Help”, have you done a verify on the sync locations (not just the local databases)? Did you “clean” the sync locations before removing and reinstalling the app?
I did that on both MacOS devices, in the Pref/Syn by clicking and Verifying Database Throughtly, is that what you are referring to?
Note: removing and reinstalling the app is a last resort and rarely helps anything.

did that on both MacOS devices, in the Pref/Syn by clicking and Verifying Database Throughtly, is that what you are referring to?

Since you are saying “on both MacOS devices” it was not clear that you verified the sync locations” which are in Apple’s world, not your devices.

And if on a local network, have you tried Bonjour to get synching going while you debug Apple’s CloudKit?

I haven’t tried Bonjour. Should I enable that option?

Another thing to note. Since I want to retain the folder structure and direct access in MacOS, I put all files in a colder that is located in iCloud and indexing the folder> Could that be causing an issue?

Indexing files in a cloud-synced location shouldn’t directly cause a missing manifest error.

In DEVONthink To Go’s Settings > Sync: Locations, tap the sync location, then left-swipe the database and choose Clean.

Check the sync icon in the bottom toolbar for a triangle. Tap the sync icon to see if the clean was successful.
If it shows the sync data was successully cleaned, go back into the sync location and enable syncing it again.

Just did that. Same issue after reenabling it… 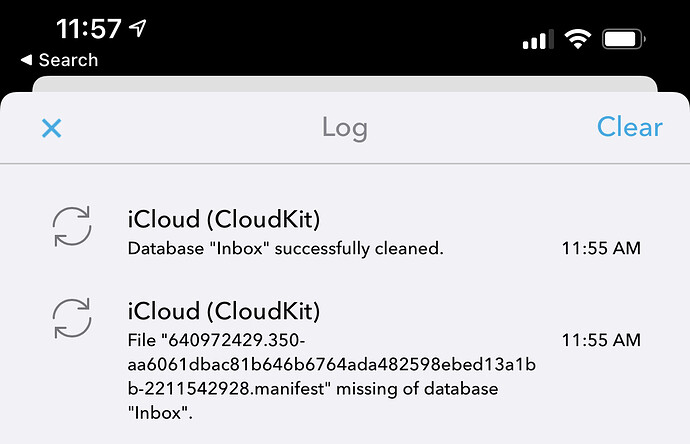 I haven’t tried Bonjour. Should I enable that option?

I would. Mostly likely it will get sync going for you (which I hope is the whole point) while you debug the Apple CloudKit service.

Are you using a shallow sync, i.e., Download Files: On demand, on your databases?

I do not know. Where do I check that?

Also, go into a database and open the Info popup to see this per-database setting.

It was setup to On Demand. Should that be on Always? You think this is causing the issue?

No, I don’t think that’s the issue and the setting depends on the situation.
However, if you’re adding new sync locations, you need to make sure the old sync location is still active if you’re using a shallow sync. Otherwise there won’t be contents for all the files to transfer to a new sync location.

Is there a setting in the MacOs app for Download files. I have a folder on the desktop, has files and folders. None is showing on the Macbook…Once I make a change on one, does it take a while to update on the other? How long shluld that take. My sync is se to Automatic.

Any other suggestions before I give up on this? Very frustrating. Nothing in Inboxes consistently syncing. I cant determine the issue. I am willing to start from scratch and import all files once again. I wasted too much time to use the DT3 effectively.

Thanks for all the help…

Doing the same thing again and again is unlikely to improve anything. My best recommendation is you go back and re-read the free e-book “Taking Control of DEVONthink Pro” freely available by DEVONtechnologies on their web site. While there, get a copy of the Handbooks for DEVONthink and DEVONthink ToGo. Import both Handbooks into your database for easy referral, including use the built-in “add to Favorites”. Read and follow the instructions there.