Meaning of small dot next to database?

can anyone tell me what this little dot is supposed to mean? I don’t have any unread files in this database nor any files flagged, the dot is staying there.

It means the database has not yet been synced.

I have had the same question… and looked for it in the online help, I am sure @BLUEFROG has described it there… but sometimes it‘s difficult to extract all relevant information

Hmm… perhaps I didn’t. Making a note of it. Thanks!

And to make a slight correction to @BillW’s comment: it means there are unsynced changes in the database.

Thank you, that is of course more accurate.

I thought it was new item lol

Even after synchronizing the database? What kind of sync location(s) do you use?

How did you set up the Bonjour synchronization? Does only one Mac support incoming connections (see preferences) and do all other computers/devices connect to this central server?

Screenshots of Preferences > Sync from all your Macs might be useful to figure this out.

As a new user, I’m only allowed to post one picture. This is my desktop machine. 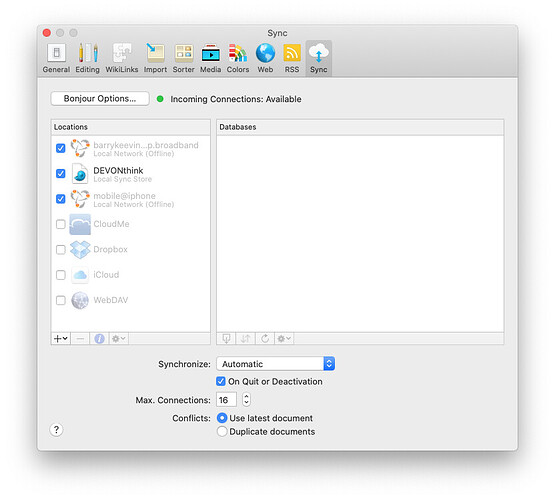 Looks like you enabled incoming connections on multiple devices/computers. Recommended is to enable this only on one computer/device (the server) and the other computers/devices (the clients) connect to it.

Another possibility to synchronize databases but it’s limited to computers and not supported by iPhones/iPads.

All the dots are still there.

Why did you disable Bonjour on the Mac?

I’m trying to find out why I still have the dots when everything is in sync.

Do you intend to use the Mac as the Bonjour server for the iOS devices?
If so…

On the server Mac…

In DEVONthink on the Mac acting as the server…

Yes, I’ve done all that before.
I have Mac, MacBook and iPhone.
I turned the Bonjour off on the MacBook and the iPhone stopped syncing with it. That’s no good to me.
I don’t have a Cloudy folder to worry about, I’m only using local sync.

I turned the Bonjour off on the MacBook and the iPhone stopped syncing with it. That’s no good to me.

Do not disable Bonjour on the MacBook. Logically, the iPhone won’t sync with it if Bonjour isn’t enabled on the Mac.

I don’t have a Cloudy folder to worry about, I’m only using local sync.

You always have a Cloudy folder. It’s a core component of DEVONthink’s App Support.