When I opened "New Window"s in DT2 they appeared as tabs - so easy to switch back and forth. In DT3 the “New Window” command opens separate windows. In full screen mode these windows are on different desktops, often not adjacent to each other. Is it possible to open new windows in tabs, as in DT3?

Welcome @peeler
No, this is currently not supported. It may be a feature of a future release.

Yeah, that is exactly what I discussed about in my posting. When multiple windows are open, it is a real nightmare to switch between them via Command+ ~. In my opinion DT3 should enable the functionality that is included in the operating system (tabbed browsing). There are some apps such as Bookends that do not support that. Having the tabbed functionality (instead of the tabs in one window) is for my workflow crucial and without that I will not upgrade to DT3.

Maybe @cgrunenberg can provide us some positive tidings…

I thought this was a matter for macOS? In the System Preferences > Dock > Prefer tabs when opening documents = Always.

I’m also going to say this is something I need and was getting ready to plop down the cash to upgrade to the new Pro version, but without this ability, I will have to think thrice before upgrading to v3 at all. Which is rather disappointing.

Yes, partially; MS Office also does not support this inherent capability.
Tabbing with more than 1 database in use is the way to go. Otherwise the behavior of DT3 becomes inconsistent when at the same time you do find searches. That search functionality will firstly survey all databases open. So in the end, you will end up (as I did with playing around) with documents from various databases in tabs in one window, and then switching back and forwards. That whole process makes me nauseous.

Basically, DT is the main and best app for choosing to use the Mac. I am willing to pay whatever it costs to get that the windows-tabbing functionality included in DT3!! Apart from that, kudos to the DT team.

Tabbing with more than 1 database in use is the way to go.

For your way of working and thinking. This is not a universal truth and there is no inherent strength in window tabs, except as a way to integrate into a smaller space onscreen.
I work with 5-7 databases open, routinely moving between three all day long, every day. I personally do not like window tabs and only turn them on for support, then immediately turn them back off.

And I think you’ve just made the argument for retaining the ability to view Db in tabs. People use software differently, so removing a standardized feature from a newer version seems rather abrupt. It would be synonymous with DTv3 only allowing tabbed databases; those who don’t work this way would feel hobbled because of the change.

I agree. From a customer/market point of view I suspect this may be an important point. I have been an Evernote user for over 10 years. I have only just subscribed to DT, such that my DT2 licence is valid for DT3. I had been evaluating DT2 since about February. I like DT3, but if I had known about the lack of tabbed windows back in Feb I don’t think I would have taken the decision to invest in the DT licence and learning curve. I keenly await the re-introduction of tabbed windows.

Actually neither version 2 nor 3 does support them.

Tabbed windows or real windows is not a big deal for me or a deal-breaker. Use command-` to switch between DT3 windows or make the full screen on a laptop and swipe between them.

This cmd-` is a good one. Thanks!
I searched for more info and found out that this is not in DT but a general key shortcut for macOS “Move focus to next window” and can be customised by system preference>Keyboard>Shortcuts>Keyboard. I change the shortcut to cmd-right arrow.

Well, it works in DT2; why does it not work in DT3. At the time of the introduction of tabbed browsing DT favourably introduced that. With 7 databases open, tabbing them in an alternative way is a hell of working with them contrary to some of you.

Neither version 2 nor version 3 do officially support this, both actually contain absolutely no code to make this work.

IMHO: There are many work arounds out there.
One suggestion is to use BTT. The app has a custom function “Show Window Switcher for Active App” that can be mapped to any key/mouse/touchpad/touchbar gesture (I assign cmd-F3). The switcher will pop-up showing all active windows of DT. You can open and overlap multiple database windows all in the same space and jump to whichever database you need. This is even better than using tab to switch because the display of window names is not limited by the width of the tab once you have many tabs.

Obviously, I am assuming that those who need tabs for main windows are working on limited space and won’t open a combination of many main windows and document windows. Else it will be hard/impossible to spot which one in the popup is a main window and document window. For that I know of no other solution. Unless DT will consider adding some sort of identifier to the list of opened windows. 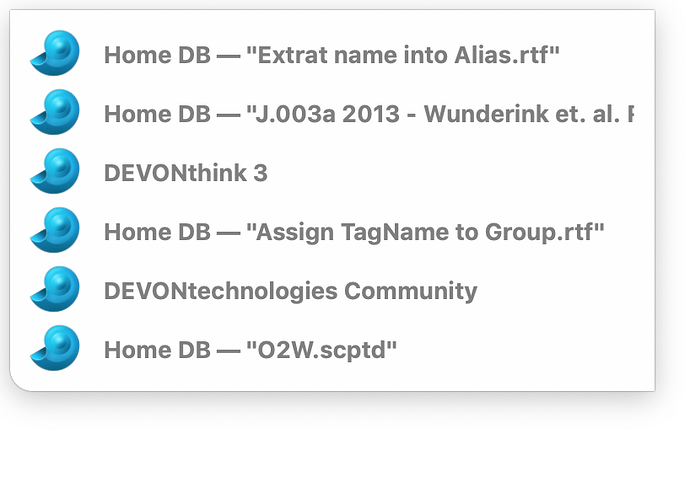 Just to avoid any misunderstanding about what I meant by tabbed windows I have attached 2 screenshots. One shows the context menu which I used to create a new window - the top item in the list. The other shows five open windows, underlined, 4 from one database, 1 from another. I don’t understand how this can be an unsupported and uncoded feature; hence my suspicion that we are talking at crossed purposes.
Whether working on one project or multi-tasking I find this arrangement extremely productive, far more than trying to have random access to any of the open windows by other means. 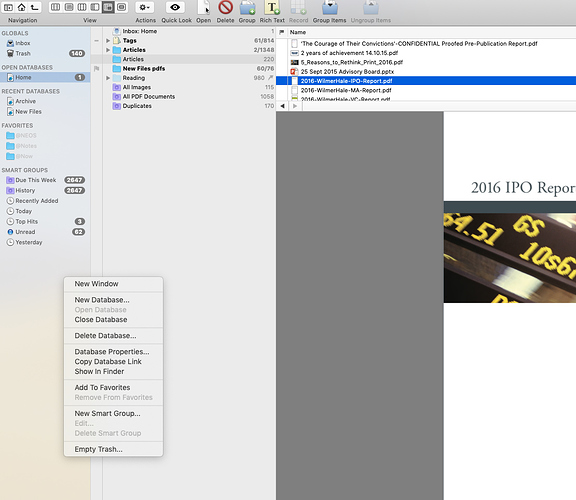 No misunderstanding. The second screencap shows window tabs, which as Criss noted is not officially supported and has no specific code in the application to make that happen.

How do you turn window tabs on and off?
Thanks.

You can’t. As I noted above, window tabs aren’t supported in DEVONthink 3.