Testing with this new interesting feature of DT3 and having trouble finding this (maybe obvious) workflow:

So far I managed STEP 1 by using the following smart rule:

However, I can’t trigger STEP 2 when the PDF is created inside group “2. PDF”. I am using this smart rule:

Tried several triggers (on import, on creation, on move) but none seems to work. Therefore, am I doing something wrong?

Still figuring the whole out. Thanks.

EDIT: I guess the right trigger would be “On move”. However, this only works when manually moving (i.e. drag and dropping) the file, not when the move operation is handled by an action in a smart rule. Bug maybe?

I shall be watching this thread with interest as I’ve come across the same sort of problem (i.e., how to trigger a second smart rule when the first smart rule has moved a file into a particular location searched, of watched, by the second smart rule).

In that case I don’t understand why neither “On move” nor “On import” trigger the second rule. After all (from the help file):

On Moving: Runs when matched items are moved to the specified location.

On Import: Runs when documents are added to the specified location.

This isn’t specifically addressing your question but…

My working scenario. I have some PDF files (bank monthly statements) that do not convert to OCR since they have some protection (I can open them normally in Finder).

I found that if I convert those PDF to (yet) PDF using DT, then the resulting PDF can be OCR’ed.

So basically I was attempting the following workflow:

I have a folder structure comprised of a “Bank Statements” folder and inside it an “originals” folder. They are indexed in DT.

When I move (using Finder) a bank statement (“PDF1”) to “Bank Statements” I would like DT to:

Having some trouble doing this using smart rules interface. Maybe it isn’t possible (right now) and it’s a job for scripting?

This should work, a third copy isn’t necessary. 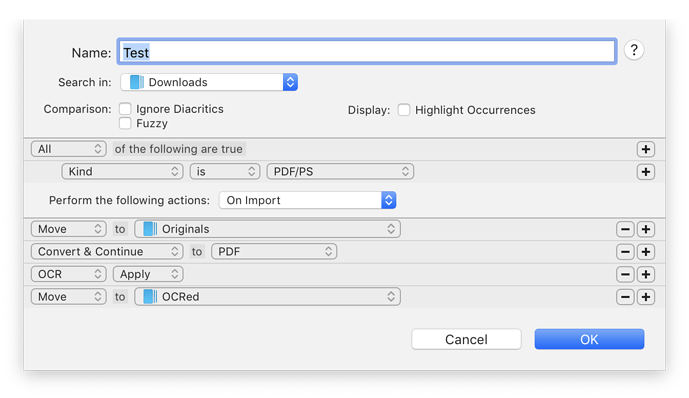 Thank you, works perfect. I had missed the “OCR” > “Apply” action to apply OCR without creating a new document. And “(…) & Continue” actions are key to this…

One thought: since OCR action has the potential of creating a new document, maybe there could be an action to act upon that newly created document? (like “OCR & Continue” > “To Searchable PDF”)

since OCR action has the potential of creating a new document, maybe there could be an action to act upon that newly created document? (like “OCR & Continue” > “To Searchable PDF”)

Thanks for the suggestion! At least for PDF documents the current options are sufficient, the other formats seem to be rarely used for OCR.