An update on the experimental qNote script

Basically, this script is a floating window version of Sorter that is only focused on notes taking for those who use large 4k display/s and don’t want to look up to the top right corner of the display/s when typing their notes (that user is me).

How to use the script:

When the user selects a block of codes, they can use “Append Code” button to add fenced code. 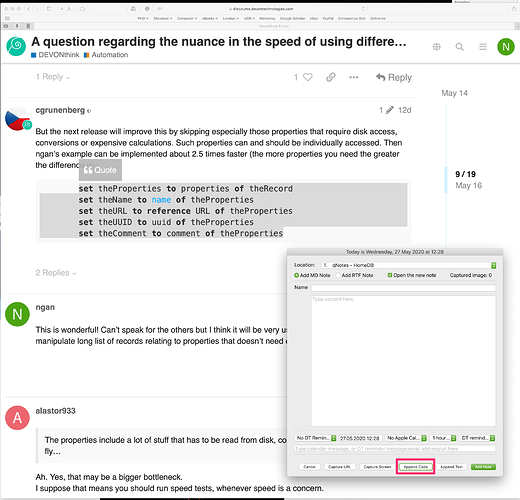 The user can also paste the website URL address into the note. Only Safari and Chrome are supported.

The programming for this feature is the most challenging area and is still somewhat experimental ( i.e. Can be unstable). 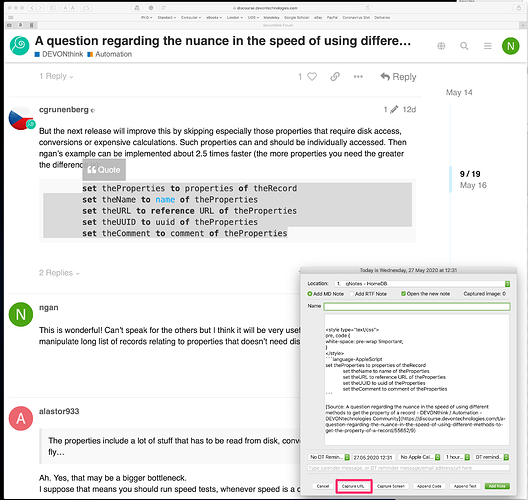 The user can append multiple blocks of text, fenced code, and website URL in the same note. 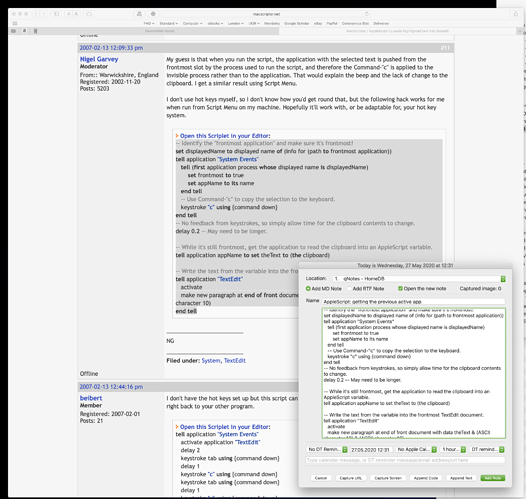 The user can also capture multiple screenshots in the same note. 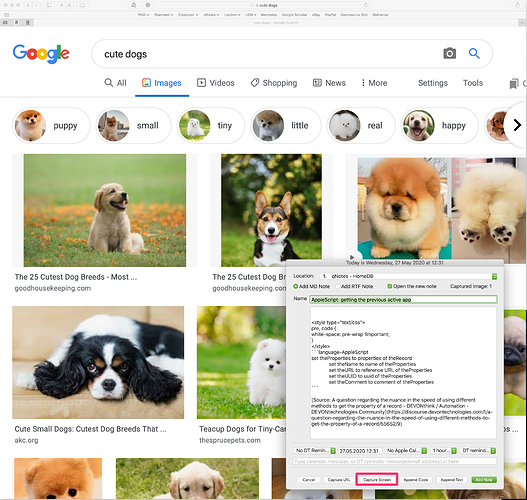 The created note, saved under one of the designated note groups. 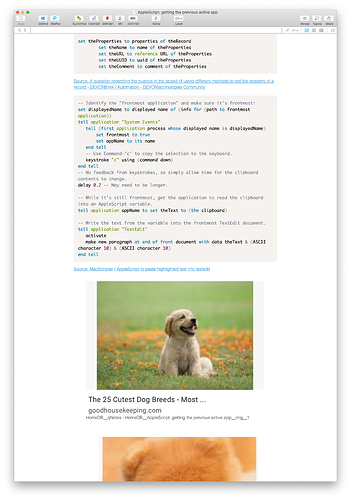 For the images in MD notes will be saved under a common image assets folder. 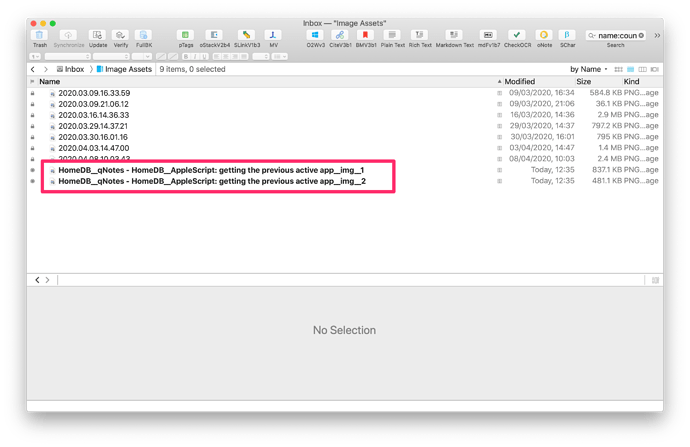 There is a bug in Catalina and AppleScript can’t set the Apple Calendar alarm.
The user can add a reminder without adding a note. Just type in the reminder’s message field and leave the name and body fields empty. 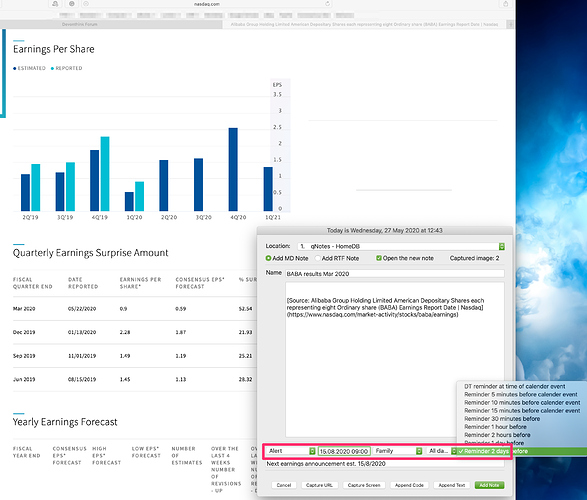 A reminder is set, and an Apple Calendar event is set with a link to the DT note. 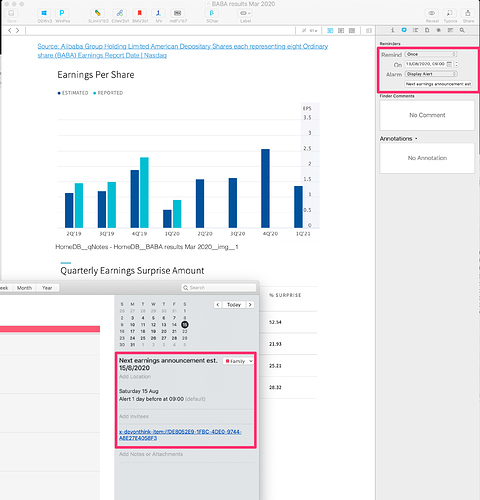 Note: The programming of appending text and code block, and getting the browser URL is not trivial. Some UI programming that involves keystrokes and time delay may make this script unusable on some computers. In addition, not all apps support select text method smoothly (I think).
I develop this for own use, and will unlikely to add any feature in the future, except for bug-fixes.

That filename is getting a bit long and unwieldy

Just the kind of nerd I am…

This looks amazing…but I get an error when running it:

Not sure if I missed a step somewhere but this is way beyond my ability to debug without help! Thanks!

Sorry to hear that.

(1) Just to make sure that you have set up the uuid of the groups for saving notes and images within the script. The uuids in the script are mine, you’ll need to change those to your groups’ uuids - any number of groups for qNoteGpsUUID, and only one group for imageAssetUUID.

(2) Within the next two days, I’ll post another version with error checking blocks (to check where have the problem/s occurred) in case someone are seeing problems when using the script.

(1) The option of taking MD and RTF notes is merely a trick by using the excellent DT’s internal conversion of MD to RTF. This script always create a note in MD format as the first step. But if the RTF option is checked, the script will tell DT to convert the MD into a new RTF formatted note, then delete the original MD formatted note (you will find the MD version in the trash). Since DT prepares the images into the RTF package contents, the images that are saved in the image assets group can be deleted, too. That’s why the MD and RTF versions of the same note will look almost identical.

(2) The second discussion is regrading the trick of grabbing and appending the text(or fenced code block) and the web URL into the note while the script is running as the frontmost app. I have modified what I found from other AppleScript user forums to the most effective way (IMHO) of accomplishing the job.

That’s why the script may not work for some computers, because the delay required for different computer could be different. I hope this trick can be useful for the others.

Note: If there are better/foolproof way to accomplish the same function, please share!

v1b6 is updated in post#1. This version is identical to v1b5 but includes error reporting message.

Okay I got it running, and my activation method of choice is a KM macro that simply activates the qNote application. But there’s a CRAZY delay in doing so and the window popping up. Not sure what’s going on…

I saved it as an app as suggested and just use KM to launch it.

What I suggest is a troubleshooting process: if the performance of the script is reasonable when it is launched directly from Script Editor/Script Debugger, then perhaps the way KM launch the script has some unexpected consequence (by me), else the use of Dialog Toolkit Plus is more demanding on system resources (memory or CPU) than I have expected.

hi Ngan: whatever the date I set the DTP note alarm (not calendar) date sets to 5-5-2022?
any suggestions. thank you

I am assuming that you aren’t using the UK date format in your OS? I don’t have much experience in localisation but can you post a screenshot of the dialog showing what you have entered?

Or change the iniEventDateTime to an order/format that is consistent with your system.

thank you Ngan. yes that did the trick for the date. The time now is always 12:00AM now!

Can u show a screenshot? And what’s the date/time format of your system?
The setting of iniEventDateTime should be the same as your language and region setting except that no comma is needed between date and time, and the “/” can also use “.” (I think). 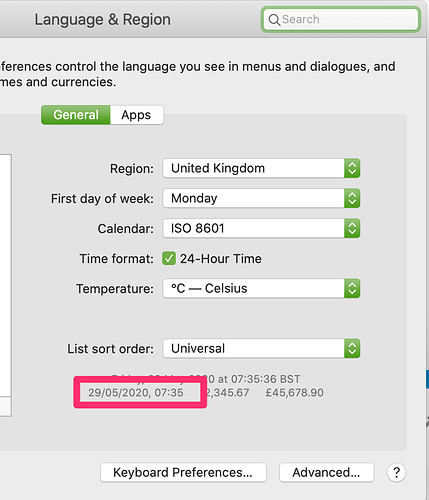 I have been using the script for a few days and have decided to add three features in this updated v1b7. The design will be frozen now. 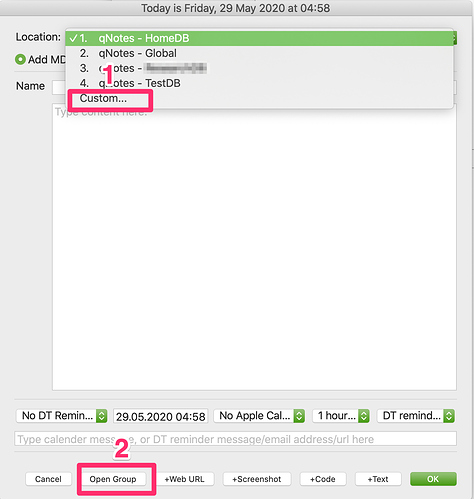 Final Note:
Grabbing the web URL is the trickiest part in this script and the feature may not work sometimes. The last resort is to increase the delay in this handler by increments of 0.1 until the feature works. I have no other solution as of now.

But there’s a CRAZY delay in doing so and the window popping up. Not sure what’s going on…

Hi, when you ran the app for the first time, was DT opened? The reason is that the script will open DT and its relevant databases (of the groups for notes) before showing its dialog box for the first time (hence the possibility of delay). If such is the case, running the script should be much faster afterwards.

Ngan:
I am in USA, PST timezone.
here are the screenshots. thanks again for your kind help 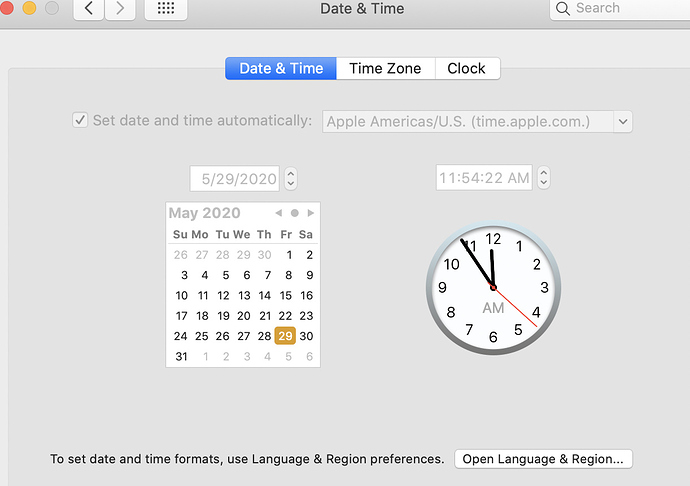 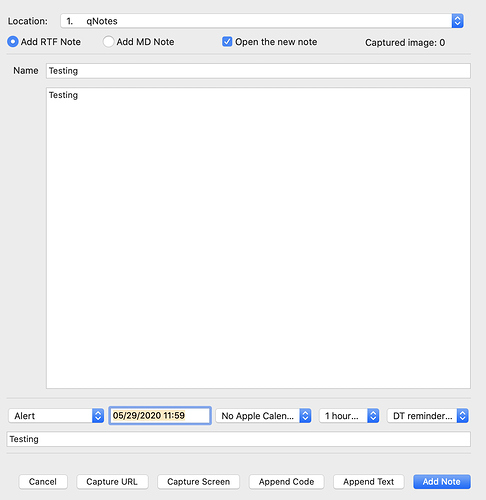 P.S. If you want to use the earlier version, the only changes are these two lines: