Still trying to sync my DT3 and DT To Go. Using iCloud (CloudKit). In DT3 in sync preferences it’s telling me “not yet synchronized. Upload database.” I tried uploading it to iCloud, but it uploads as a zip file. Is that where I should be uploading it, and, if so, how should I do it so that it’s not a zip file? Thanks.

Uploading the database (which is a OSX “package” of files and not a Zip) is not part of the instructions for setting up a sync. At this point, probably worth going back to the DEVONthink Handbook (or Help, which has same content) and carefully follow the instructions exactly. Also consider doing a Bonjour sync setup first (faster and more reliable, but requires a local network connection).

This is what I’m seeing: 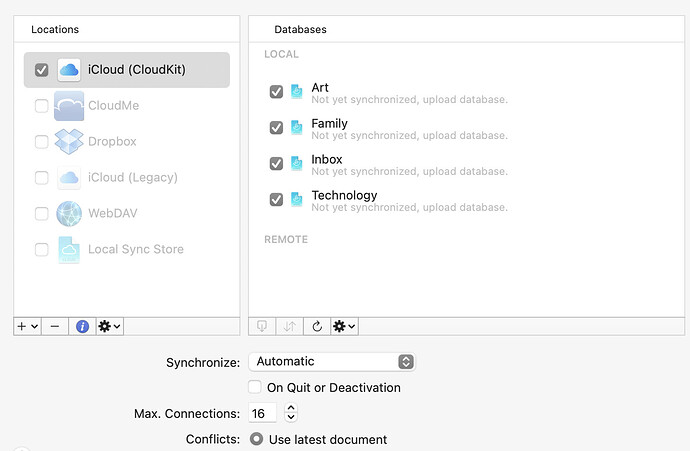 Also, I was under the impression that Bonjour was for machine to machine synching. Is that wrong? Would you use Bonjour to synch between a Mac and an iPhone?

Would you use Bonjour to synch between a Mac and an iPhone?

Fast, reliable, but only available when both devices are on the same network. You can use Bonjour in addition to Cloud syncing if you need/want non-local syncing.

“Upload database” does not mean for you to upload the database in any shape or form; it means that DT needs to do so. Why that is not happening automatically, however, I don’t know. Typically, the upload would start when you select the database; I would expect you to see a wheel rotating next to the name of the database (in the window you posted) showing that the database is being uploaded (the text, however, stays the same until the database is uploaded). Assuming nothing is happening, try restarting the Mac and DT. If that doesn’t help, perhaps try deselecting one database and then reselecting it. Uploading can take some time, especially for large databases.

Would you use Bonjour to synch between a Mac and an iPhone?

Yes! Both are machines.

You should always check DEVONthink’s Window > Log when you think there’s a sync issue.

You should always check

I really must remember to tell ppl that; that’s the second time in a week.

No worries! It’s my job to be the bellringer

OK, understand that. However, the only time I expect to use DTTG is precisely when I’m not on the same network at my Mac.

Thanks for explaining what “upload database” means in this context. Probably would help if the wording were more like “uploading database.”

In any case, I did what you suggested, that is, restarted both the Mac and the iPhone. Didn’t help. Also tried deselecting and reselecting the database (just tried with one rather than all checked at once). Still not working. I hadn’t checked the log as Bluefrog suggested. Here’s what that looks like. 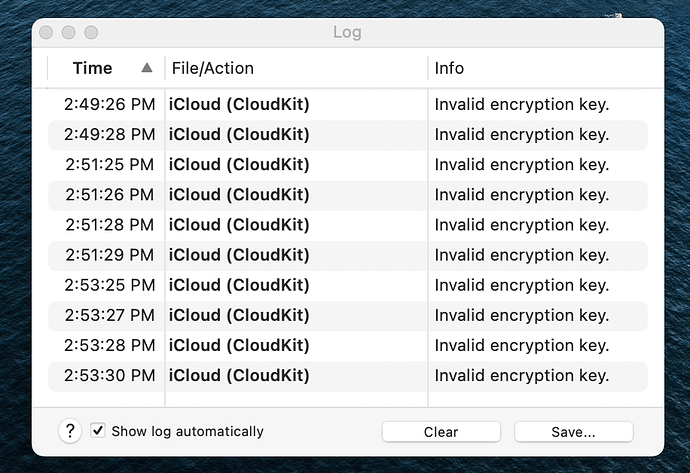 Probably would help if the wording were more like “uploading database.”

It’s not going to say that since it’s not uploading. It’s telling you what needs to happen.

I don’t remember having created an encryption key. Clearly don’t know the significance of the message.

Did you set up the sync location on another Mac or in DEVONthink To Go first?

use DTTG is precisely when I’m not on the same network at my Mac.

Sounds like a plan. But if you sync while you are at the local network and take away you can still use DEVONthinkTogo even with no syncing as you are not by definition using DEVONtbink desktop. Just an idea.

That makes a lot of sense to me because you’re right. I won’t be using DTTG for anything other than looking things up when I’m away from my Mac. I’ll try to see if I can set it up with Bonjour.

Pay attention to getting everything you want to be downloaded with the Bonjour sync.

Also worth getting the cloud sync going for getting what you may have not synced.

Both Bonjour and a cloud synced can both be turned on.

Then perhaps it ought to say something like “waiting for database to upload.” The user doesn’t know it’s telling him/her “uploading database is what needs to happen.”

In any case, I’ve been a DT license holder since 2004 and I think it’s time for me to say goodbye to this program. It’s just getting too difficult to get straight answers to problems. And so much snakiness so often on the part of people who answer. I guess it’s all those academics – it’s in their blood. Having been an academic most of my life, it’s easy to recognize.

Things just aren’t the same in the forum since dear Bill DeVille died.

Well, I’m not quite sure where that came from, and it doesn’t sit too well with me. However, very much each to their own. If you do decide to set this up so it works, you either need to remember the encryption key you used when you set up the sync store, or set it up the encryption anew; obviously you will need the same key on both devices, otherwise they can’t both sync with the the same sync store.

A piece of software is a tool - and if you’re using the wrong tool for the job, it’ll be a frustrating experience. I don’t try to drill a hole with a saw, but I don’t use a computer controlled laser device either. A number of your posts in the past have made me think you are struggling with concepts in DT which to me are straightforward. That doesn’t make me clever or you not; it makes it a tool which I think conforms to my logic, and not so to yours. I’ll admit that’s an oversimplification, of course - but you’ll get my drift.

So, don’t go because you’re riled, and even less so because free help on a free for all forum isn’t chiming the right bells for you. But do look for something better suited to your needs if you feel you are using the wrong, or a too complex tool for the job.

Well, that’s my unsolicited advice anyway. And, if after a night’s sleep you decide to try this again, then come back here, and ppl will walk you through setting up the sync store again (I personally am not using iCloud Kit, so can’t test any of my responses; however, for other sync stores it is possible to change the encryption key, which, IIRC will clean the store and resync it. Again, the key will need to be the same on all devices, and I don’t know whether the change has to be initiated from the device on which the sync store was set up).

It’s “auf Nimmerwiedersehen” btw… The Duden suggests that this is often said in jest; it’s not a term I have ever experienced in jest though, and far more one which is laden with tragedy and hatred.

It’s telling you what needs to happen.

Even so, the wording is awkward. „Upload“ could equally well be an imperative (please upload the db). „Trying to upload“ might be clearer.

Thank you for your reasoned and reasonable response. It seems to me you’re correct in all respects in what you’ve written. I have, after much investigation, found something that I think is better suited to my rather undemanding needs; Keep It from Reinvented Software. I’ve managed to move everything from DT over to Keep It on my Mac and sync that data with their app on my phone. I believe it will suit my purposes just fine.

Oh, and regarding “auf Nimmerwiedersehen,” of course you’re right. Though I do find that “aufnimmersehen” has a certain neologistic charm, though perhaps not.

Again, thanks for your response.

Thanks for coming back to leave a message

I’m always a little sad to see any user leaving DEVONtech - but that’s just because I don’t do change very well. I sincerely hope you have found the tool for your needs.

Anyway, I hope that at 83 I’ll remember that my walking stick is not for prodding people who bug me. Heaven only knows, there’s enough I forget even today, and I’ve still got some way to go. All the best!

@BLUEFROG Purely from a UI perspective, in this specific case the text should (in my opinion) ideally have changed to “Failed to upload database; see log.” Whilst I personally would not have considered the original text an imperative, and would have noticed the entry in the log, I find it completely reasonable that the OP stumbled over this - to the extent that I cannot actually reasonably argue why I would not have considered “upload database” to be an instruction. I think the fallacy here is to assume that something which is obvious to me must be obvious to somebody else - a catastrophic mistake I have spent a reasonable portion of my life to date making. When making that assumption I have often failed to consider my personal level of knowledge of a subject and the time and effort it took me to acquire that knowledge; in my head, knowledge seamlessly seems to become something “I’ve always known” - and so does everybody else.

Um, snapping back out of amateur psychologist and CRM mode, I wonder whether the handbook might profit from being more detailed (more images of the steps involved?) on setting up sync? There are quite a few entries in the forum from people who have found setting up sync difficult; I’m not in a position to say whether any of those actually read the handbook at all, of course. I might post more when I’ve taken another look at the chapter on sync. And I’m aware that it isn’t really my place to be suggesting this at all; please accept it for what it is - thinking unfinished thoughts out loud. 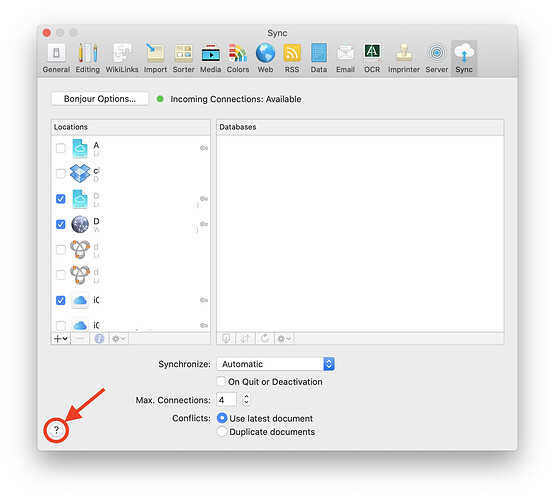