Questions regarding Concordance (as described in Help)

Would appreciate some clarity on the following:

1.) In the Help documentation [Concordance], the image appears to show the option to have Concordance appear as a separate/floating(?) window, which is apparently triggered by something in the Tools > Concordance menu? I am not finding this option – is it currently possible to do this?

2.) The above appears to tie in with my question pertaining to the use of the Graph? If I understand the Help documentation correctly, I think one should be able to select different terms/words in the List view, and hit “Update” to change the Graph? But it would appear the the “Update” button, visible in the Help, requires it to have been opened in the separate window?

3.) Regardless of the above, could someone clarify what the Graph could potentially be used for? Unless I am missing something, it doesn’t appear to be dynamic at the moment? Is it supposed to be? As in, selecting different terms, would have the Graph present differently each time?

3a.) The Help documentation states the following: “The frequency graph shows a graph of the word frequency over the rank number of the word (see above)”. Rank number appears to be referring to the first column in the Help documentation image, which does not correlate with the current sidebar Concordance view, which merely starts with Frequency, as in – there is no Rank column? Is this no longer available?

3b.) What is the difference in any event between “Rank number” and “Frequency”?

Only realised now that there appears to be 2 sections relating to Concordance – should have been clearer initially.

Will post screengrabs below from the Help section I am referring to, while hopefully make it clearer. 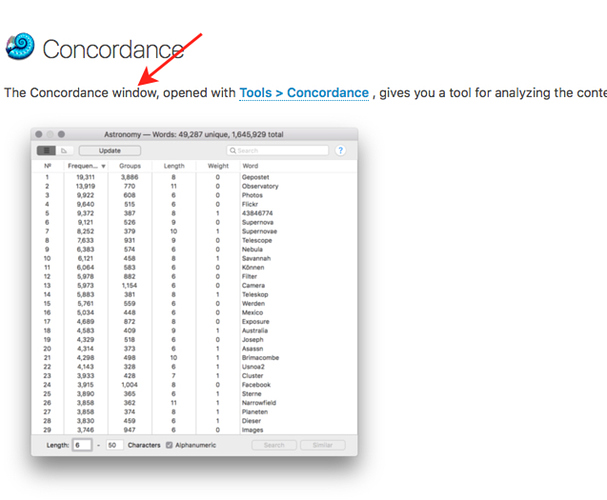 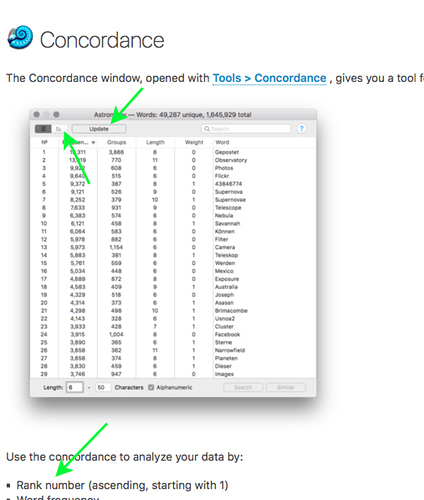 Here one sees an “Update” button, the option to switch, top-left, between the List and Graph views (presumably based on what is selected in the list??), and below the window, in the Help text, is the reference to the “Rank Number”, which presumably is in reference to the first column in the list view of the Concordance window. 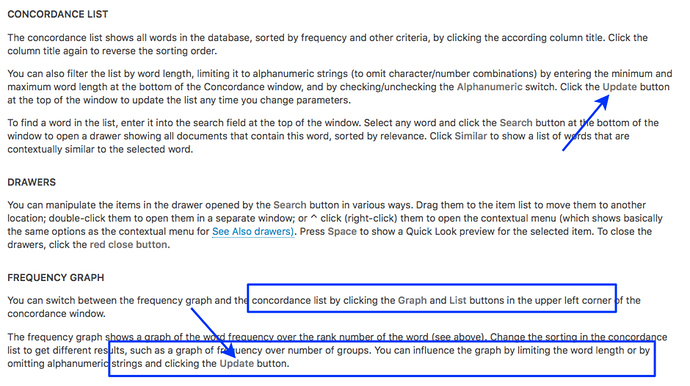 The Graph feature has me intrigued, but as mentioned in my original post – I am unclear on what to do with it at the moment.

So none of that applies to DT3?

Correct. The Concordance is an Inspector now, not a separate window. Refer to the DT3 Help for the current info.

Jim - I have DTPO2 still installed, but not open - having moved all over to DT3.

I accessed the help documentation from inside DT3, and that is what I found. So was this pulled up from inside the DTPO2 documentation, but displayed through the built-in Help over in DT3, using some macOS process?

Hmm… I suppose it’s possible, but Criss would have to verify that. I have always run DT3 in a separate, isolated account.

Just to confirm – it appears that searching for “concordance” within the Search Field of DT3’s help – provides the access to the older DTPO2 help documentation, which is listed under the heading “All Other Help” (with 25 results).

The first heading, “DEVONthink Help” (with 16 results), appears to only provide the documentation pertaining DT3.

I hadn’t noticed the distinction, which resulted in my confusion – since I assumed that what would be found within the DT3 would be limited to DT3 documentation. The above appears to be the work of macOS, that finds the DTPO2 documentation, given that I still have DTPO2 installed on my system.

The above appears to be the work of macOS, that finds the DTPO2 documentation, given that I still have DTPO2 installed on my system.

Indeed, it is part of the macOS Help system. Yet one more reason why I advocate running a clean and separate account for beta testing DEVONthink 3.