I have tried to configure ScanSnap Home to scan to DEVONthink Pro Office as outlined on your website but unfortunately it doesn’t work. After pressing the add profile button, in the window with the list of option on the left hand side, I don’t see the “Application” group at the bottom of the list where I can select the DEVONthink application that I added in the Preferences. What could be wrong? I’m using a new ScanSnap IX1500 scanner on a iMac running OS X Mojave.

Select one of the pre-defined profiles on the left hand side such as “Auto Scan”. Change the profile name to “DEVONthink Profile”. Change the Document detection to “All sheets will be scanned as documents”. Change the save to destination to a folder such as ~/Pictures. In the “Send to Option” you should see the DEVONthink entry that you set up in the Preferences section. Press the Add button and ensure that this profile is selected.

Ah, okay. Got it!
Thanks very much for your help!

Just moved my ScanSnap onto a new Mac & installed ScanSnap Home. I was able to get it to send scans to DTPO (using the blog instructions), but there are two “annoying” behaviors of the new setup I’m hoping someone knows how to address:

The first can be disabled with Pro Office’s Preferences > OCR > Enter metadata after text recognition.
The second is a question for Fujitsu. We can’t control what ScanSnap Home does (or doesn’t do).

I’ve added the profile as described which is working fine! But there is one thing I stumbled upon.

When DPO is not started - OCR seems to be not working - even though I’ve activated to do OCR on incoming documents. Once it is started it is working as expected. 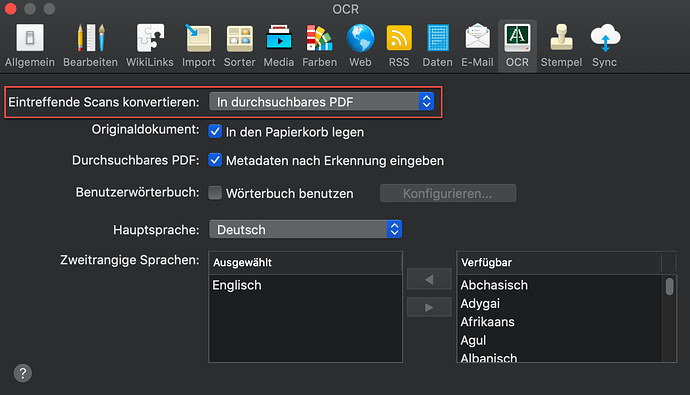 Welcome @kimpi
There are some bugfixes regarding OCR coming in the next maintenance release. Thanks for your patience and understanding.

@BLUEFROG that sounds great - any idea when the beta3 will drop?

We don’t give timeframes on releases, but it shouldn’t be much longer on public beta 3.

I’m having the same issue and public beta 3 didn’t seem to fix this. New scans from ScanSnap Manager don’t seem to follow the DT OCR settings. The scanned file is not deleted even though the preference is selected and it is not automatically OCR’d to searchable text even though this is selected.

The scanned file is not deleted

The scanned file isn’t deleted from where?

To be clear, a PDF of the document does import to DT3, it’s just not OCR’d and the original scan remains in my Pictures directory.

I am seeing no issue here. Have you updated to DEVONthink public beta 3?

I’d suggest rebooting the machine to see if the issue persists.

I have done that as well. I’m wondering if I should uninstall and do a clean install. Do I need to uninstall DTPO? If I do manual OCR > to searchable PDF, it will OCR a document already in DT3. It just won’t OCR automatically on import.

It seems to be working now. Unfortunately I did several things at once, so I don’t know which might have fixed the issue. I opened the DT3 preferences > OCR and toggled each of the settings off and then on. I also opened DTPO at the same time and had it running.

Thanks for the follow-up. I’m sure Development is keeping an eye on this thread. Cheers!

Just upgraded to ScanSnap Home + DevonThink 3 (from 2) and also having troubles, albeit sightly different:

For me, DevonThink 3 just remains in the “Adding Document” state. 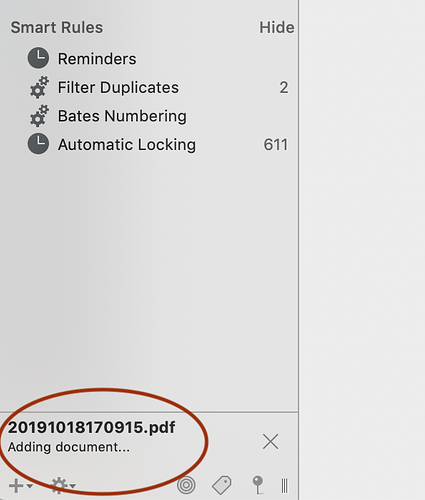 So ScanSnap Home handed this off, and the file name DevonThink shows is the one in the folder. It just never finished the “Adding” process.

I have rebooted, and I did follow the instructions to take an existing “to application” profile and adjust it.

Scanning “manually” from ScanSnap Home and then adding the PDF to DevonThink works fine.