Setup at Home and Remote with two laptop and ipad

Currently my setup is the following:
My main license is running on my personal laptop and I sync via webdav onto my nas and via webdav onto the laptop of my wife and iphone and ipad. No bonjour sync so far.

I am planning on moving my main devonthink onto a macmini which is running at home. Me and my wife are supposed to use our individual laptop (MacBookPro) and ipad and iphones to access the databases remote.

I wanted to get your opinion on how to get this this setup started, how do I sync between my mini and my laptops at home and remote when I am at work and maybe if it is smarter to get a server license soon to run this on my mini. I am also little confused about when to make use of the different sync options, when to use bonjour, when to use a local sync store and when it is best to use webdav. Maybe someone can shine some light into this and push me into the right directions before I move everything onto my mini and run into problems.

I am sure you will get lots of advice about multiple syncing options.

As for a DT3 server license, I do not think that is what you would want. The server works when you want occasional users or non-Mac users to have (somewhat limited) access to your databases. If your databases will be accessed only by yourself and your wife, you will both be using it regularly, and you both own Mac laptops and iOS devices, then installing DT3 on both laptops and installing DTTG on your iOS devices and syncing them all will be notably superior to using the DT3 web server.

supposed to use our individual laptop (MacBookPro) and ipad and iphones to access the databases remote.

Could you elaborate on this? You are currently syncing to the NAS, but this no longer possible somehow?

You only need the server version if you want to connect to a running DT instance from a web navigator. And it is not the full system. 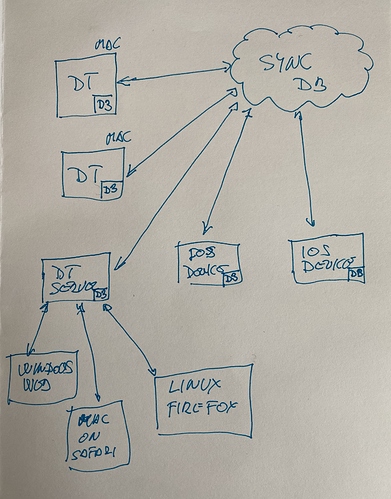 You only need a DT Server if you pretend to connect with a web navigator because a) you run under other operative system b) fine multi user grain permissions. And WEB interface is not feature complete (at least not last time I tested it).

To me, this is an incredible and powerful architecture.

(I’ve modified the image to add the local database for each DT instance to show the difference when accessing from other systems).

A great diagram to put in next version of the DEVONthink manual. 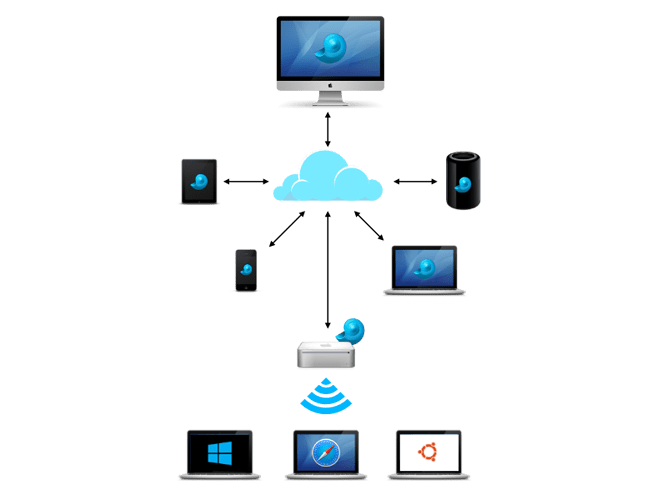 Very good. The smirk is on me. My bad.

Haha! No worries.
I still never know what some emoji mean to people. Maybe I’m too old

Neither do I. And I always miss!

It is still possible, via webdav.
I was just thinking of different and/or faster solutions at home.
For my remote access, I would still use WebDav.

Ah, many thanks. I actually thought the Server-edition is more powerful than that. Sometimes at work, I could make use of the server-features, since I work with Microsoft there, but this would not justify the server-cost of 300$.

But it still keeps the question open of how to make use of the mac mini. Would I keep a DevonThink entity running with all databases in it and sync it via webDav onto my NAS and access the databases via webDav from my iOS and MacOS devices? Or would I use a local sync store or bonjour?
I am still quite unsure of when to use which method best.

I don’t suggest using a remote sync option unless you actually need it.

Yes, you could use the Mini as a central machine syncing via WebDAV to the NAS - though it’s unclear of the benefit in this situation. The other devices could also sync to the same WebDAV location.

Though I am a huge advocate of Bonjour on a local network, since you have several devices available, only one device can actively sync at a time on Bonjour. This isn’t necessarily an issue, depending on if this is an initial import or a normal, i.e., quick, sync. You may want to opt for WebDAV in this case.

Alright. Means, that I keep the already setup sync settings via webdav for all my devices (iOS and MacOS) via my NAS as the sync location?

For my remote access, I would still use WebDav.

If I understand you correctly, you seem to attribute synchronization outside your local network with WebDAV. Correct?

To clear that up: WebDAV is a protocol that you can use to sync to any server that is able to use WebDAV, whether the server is available through internet or only in your LAN. The ‘Web’ part of WebDAV isn’t necessarily associated with internet, but it might be.

As @BLUEFROG mentioned, if there’s no need to sync over the internet, you shouldn’t. It’s usually slower and increases the chance of someone maliciously obtaining your data. Exposing your NAS on the internet or placing your sync store on an external server are examples of such situations, so please bear in mind any associated security risks. Whether such risks are outweighed by the benefits or if you mitigate them with things like encryption or 2FA is up to you.

Yes, a little better, but only a little.

Just remember, the setup in my diagram requires purchasing two additional seats (or a separate purchase of another edition) and a purchase of DEVONthink To Go!