This is such a basic question that I hang my head in shame.

But I seem to recall I could in the past use the ‘share’ button from a variety of apps to share to DEVONthink, not using DT’s own clipper. For instance here in NewsNetWire: 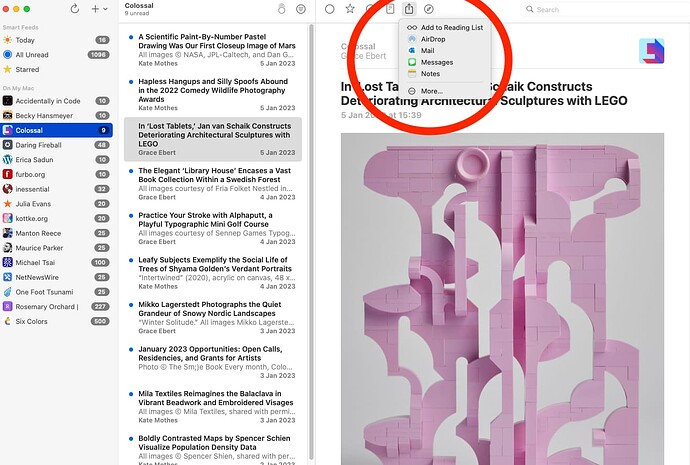 I am missing something here? How do I add DT as among the option TO which I can share from such apps? For background, after trying to use DT as my go-to RSS reader, this just isn’t really working for me. So I am once more shopping around, but will only settle on another RSS app if I can reliably send copies of things I want to keep directly to DT.

For reference, DT isn’t listed among my ‘share menu’ under ‘extensions’ in my system prefs. 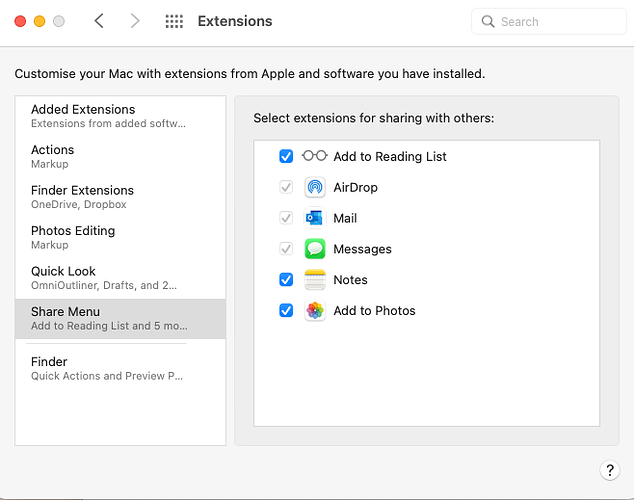 I see from the DT manual this should in fact be an option (Just as other sharing extensions are installed, open System Preferences > Extensions > Share Menu and enable the option for DEVONthink. It should now be available in any sharing-enabled application’s Share menu). How do I enable this?

Is DEVONthink installed in the /Applications folder? Then the extension should be listed in the system preferences.

What perhaps is weird that I only see Apple apps (Outlook is the main email client though) in my share menu, and no third party apps at all? Should there be other options there that allow for sharing to them (e.g. Drafts)? I don’t know if this makes a difference, but my machine is university-owned and managed, though I have full admin rights. It’s a MBP 14" M1; running Monterey 12.6.2.

PS I can see these in another window in the ‘Extensions’ settings, but not DT: 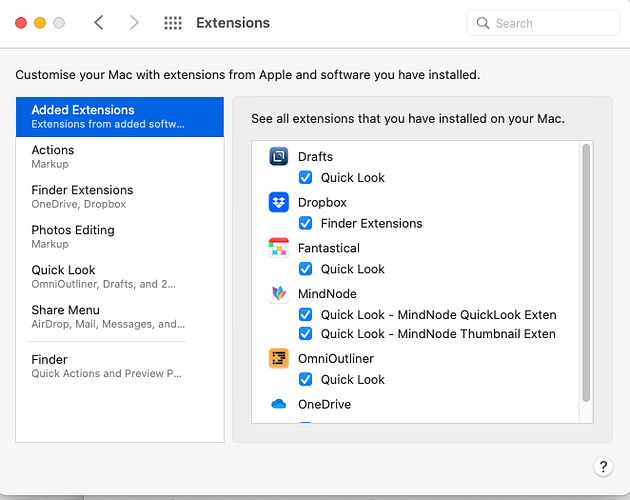 Does a reboot fix this?

Alas no – I think I’ve had this problem since installing DT on this new machine c. Sept 2022. I just didn’t get around to fixing it until now when it really starting to bug me!

Downloading the app and replacing the installed one with the one from the downloaded disk image should usually fix this.

Hmm. I shut down DT3; downloaded the new installation file; dragged it to my Applications folder where it replaced the old one; rebooted the Mac; and re-fired the application, which runs fine. But there is still no sign of DT in the ‘share menu’ or anywhere in the extensions options in system prefs.

Which version of macOS do you use?

downloaded the new installation file; dragged it to my Applications folder

What exactly did you drag to the Applications folder - just the app from the downloaded disk image or the complete disk image? In the first case the extension should be available but not in the second case.

The fact you don’t have other applications listed points to an operating system issue, not a DEVONtech one.

Thank you both! It did not in fact have Full Disk Access but it does now. It seems to make no difference, after another reboot.

Are share extensions something that a system admin person could lock down? My Mac is prepared by my University’s IT team, though I do have admin rights. There have been a few other problems (e.g. iCloud file sharing is disabled by default, but I got that reinstated thankfully).

I appreciate your advice @BLUEFROG and @cgrunenberg - thanks so much. I understand this isn’t likely a DT issue anymore…

Are share extensions something that a system admin person could lock down?

I suppose it may be possible but I can’t say with any certainty at this time. It would be the first I’ve heard of it, if so.