Would this be possible:
One of the shortcomings of DTTG is the lack of clipping websites as PDFs with working links.
So, would it be possible to create a Smart Rule on my desktop with DT3 Pro, which converts all new .webarchives that are coming from my iPad to PDFs, which then will be synched back to my ipad. After converting the webarchive to pdf, the webarchive file would be deleted and then be deleted on my i pad (after syncing) as well (because of synching). The result would be only PDFs of websites with working links.
Okay?

This is one quick approach, noting it yields a paginated PDF. Interestingly, it’s converting to a clutter-free paginated PDF. Note sure if that’s intentional or a bug, as there’s no explicit setting for this here. Development would have to assess that.

And yes, the change syncs between the devices.

Also, there is another approach that involves downloading the content of the URL as a PDF. This involves a simple script. Here I used embedded one in the smart rule. All other parameters are the same as the previous example… 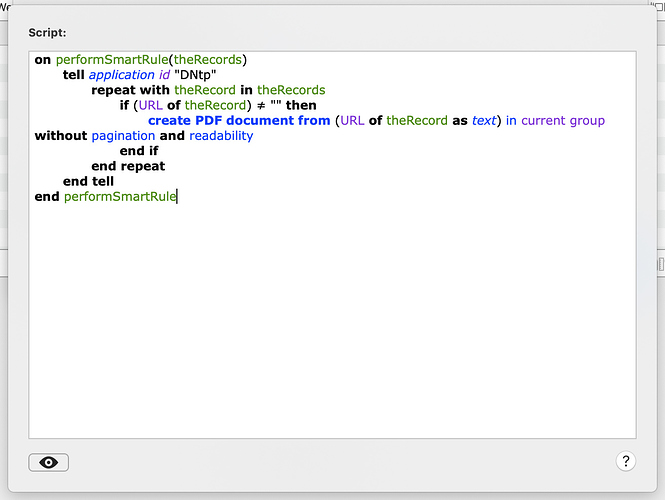 This could be used on captured bookmarks instead of webarchives.

Looks similar to my rule, but:

What is this “WebArchive Conversion”?

What is this “WebArchive Conversion”?

It is the targeted group of the smart rule. I just named it WebArchive Conversion since this is a test for this inquiry, not something I’m personally doing. Just as you have with smart groups, you must have a target of the smart rule - see Help > Documentation > Automation > Smart Rules. More specific locations are safer than more general ones, and it’s likely a good time to use a database’s Inbox for this purpose.

There is only one event trigger with synchronizing. In English it’s On Synchronization. Yours just is localized as Vor.

There is only one event trigger with synchronizing. In English it’s On Synchronization . Yours just is localized as Vor .

It is the targeted group of the smart rule. I just named it WebArchive Conversion since this is a test for this inquiry, not something I’m personally doing.

Okay. I just wondered because of the icon, which looks like tags not a group.

You’d have to take that up with @cgrunenberg (who is German).

although it’s “after synchronization” actually, isn’t it?

Not necessarily. See this smart rule…

You could use a smart rule that is regularly performed. E.g. this is one of my smart rules and performed before synchronizing: [11]

Does that trigger before the sync or after? It’s unclear without seeing the action, but the result is the same. If there is any useful distinction, Development would have to clarify that.

It’s performed before synchronizing and therefore a smart rule removing unnecessary stuff from the database before sync can reduce the sync load.

But how is this possible? The rule is created and executed on the desktop side, and the webarchive-file comes from the DTTG, so it has to move from the ipad to the Desktop before it can be converted?

As the items are created on your iPad, you could either use an hourly smart rule or a smart rule performed on sync. As the smart rule is performed only before each sync, items downloaded during a sync would be processed before the next sync but this would be only a small delay usually.

This is my smart rule, whose purpose to to convert interesting webpages saved as webarchive in DTTG during boring conference as “clean” PDFs (similar to the DT3 sent to as “aufgeräumt”) option.
The filter by 3 days rule is only the for safety reasong to limit messing up the database in case the rule will work eventually but not as planned…

Thanks for your help in advance…

Why are you trying to convert a webarchive to PDF without Annotations?

I am seeking to trying to convert webarchives to PDFs (non paginated, with working hyperlinks, and declustered), because I usually store interesting information on my iPhone, but would like to have it a format that I can share easily with other (e. g. my wife)…

PDF without Annotations isn’t available as a conversion type for webarchives. Select one and check out Data > Convert. As there are no annotations in a webarchive, conversion to PDF (One Page) should be sufficient. 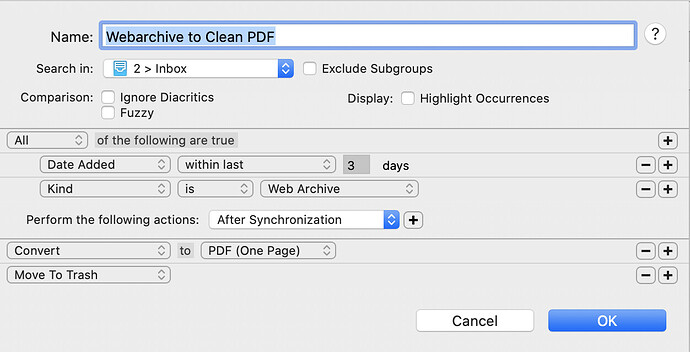 Development would have to assess the feasibility of modifying this behavior.

Is it possible to use the decluttering algorithm (as under in “Clip to DT”) somehow? 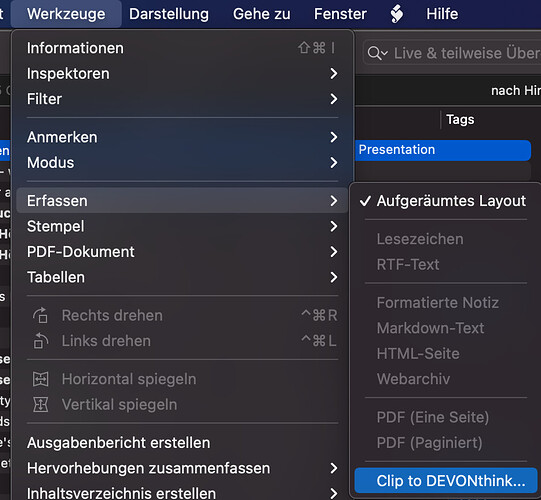 You could capture the webarchive as clutter-free and it will preserve that when converted to PDF.

in DTTG? My impression is that the decluttering results for webarchives in DTTG and clip tp DT3 delivers different results…?

If that is incorrect I’d be more than happy…

Thanks and have a nice weekend…!

You’re welcome.
You two enjoy the weekend as well!