Weird thing happening presently. Just moved DT3 over to a new machine – and experiencing one or two oddities.

On the old machine, my shortcut for “Take Note” was Cmd+Opt+Ctrl+Shift+6 (Hyperkey+6).
When I try to do the same on the new machine, I get met with the following: 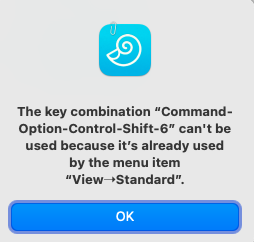 So it seems to disregard all the additional key-combinations, and reads it as conflicting with CMD+6, from the View menu/Standard option (as below)? 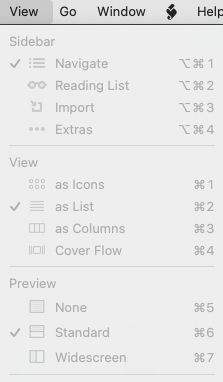 That can’t be right? Any suggestions?

It;s actually an issue with the Command and Control keys specifically as Command-Control-n displays a similar message.

Development would have to weigh in on this, but why such a long shortcut?
I have used Control-Option-N for years.

Somewhere, in some app, sometime in the past – the default shortcut conflicted with a different shortcut option in that other app, that was enough of an annoyance (by happening frequently enough), for me to change it to Hyperkey+6.

It’s actually less onerous than it appears, since it is in turn linked to a KM conflict palette (Hyperkey+D), which calls up a floating menu that lets me choose to create a new note in DT3, Drafts or a specific place in one of my watched Hazel folders.

But regardless, will use Ctrl+Opt+N for now, again – not likely to hit the conflict for a while at least (cannot remember what the other app was).

But still odd that it is blocking me like that, no?

Is this worth a support ticket/bug-report, and or OK to leave here?

Here is fine. I’m sure Criss will see it in due time.

I’m sure Criss will see it in due time.

The issue appears to be caused by a 3rd party library, I will look to see if we can find a workaround.