Without a screen shot of the two SmartGroups and perhaps a bit more specifics about what you expect, hard to help.

Thankfully, they soon reinstated the capability, but you have to explicitly enable it as a hidden preference.

If you go to the help menu, open the help file and search for hidden preferences, you’ll find the correct preference somewhere in the list and how to enable it using the Terminal. I’m not at my computer at the moment, so can’t give you the exact details, sorry!

Once you’ve restarted DT3, you may find that the search works properly again. Or not, because this may not be the problem

I suppose that would refer to looking for the plain text of the file. The OP is explicitly looking at the metadata with their smart rule condition, not the content of the file.

Supported metadata (like author) is actually indexed and also viewable e.g. in the Document > Properties inspector.

Thanks, Christian (and @chrillek),

It wasn’t for a while last year (I’ve just checked – the Great Metadata Search Switchoff Scandal was in March last year. How time flies…).

At the time, metadata searching had been turned off, but you said that there was a bug (or feature!) which meant that YAML headers (introduced by ---) were being indexed while standard metadata wasn’t.

I turned on the hidden preference as soon as it became available and haven’t had to worry about it since, but thought something of the sort might be going on for the OP. It’s good to know that all (standard) metadata is now indexed again, even without the hidden preference.

As an aside, the amount of work gone on in recent versions to improve markdown handling is very impressive – it now feels like a first-class option alongside RTF.

@cgrunenberg could you take a look at the screenshot in this thread, please? I noticed that whilst the inspector correctly shows the author, the list view does not list that same author, and apparently the smart group isn’t picking up the author either. How does the discrepancy between the data in the inspector and the data in the list view come about?

Same with the Get Info Pane. The Author is visible.

Of which hidden preference you are talking about? The only useful preferences for me is IndexRawMarkdownSource but I’m not sure if this helpful to set to true or on.

Maybe the smart group and the list view use the wrong author, the one defined in Preferences > Data?

That’s the one: if it’s not set to TRUE, then DT3’s indexing ignores some parts of a markdown text. At first, when they brought in the changes, this meant that anything in a markdown text that wasn’t rendered in HTML would be ignored by the indexing (and therefore couldn’t be searched) – this included metadata, comments, and a few other things.

Because this caused a lot of problems for people who relied on being able to search for these elements, the developers quickly brought in the hidden preference to restore the original behaviour.

However, it seems that at some point they also restored the ability for indexing supported metadata (I assume the ones in the Properties panel, like Author) without that hidden preference (see Christian’s post above) so it looks like this isn’t the problem you’re having.

Still, my understanding is that if you want to be sure that you can search on any part of a markdown text, then you should switch the hidden preference on.

Maybe the smart group and the list view use the wrong author, the one defined in Preferences > Data?

What do you mean with Preferences > Data? There is no option Data in Preferences. The “Get Info” on file level shows the correct Author.

There is no option Data in Preferences. 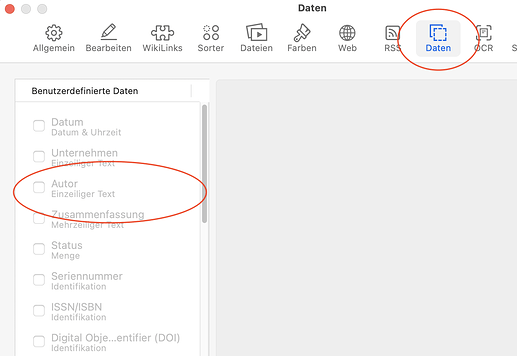 That section (custom metadata) is only available on the Pro and Server versions, I assume. I don’t think the OP mentioned which edition they are using.

I don’t use the Pro Version.

Maybe Standard version and/or version 3.8.4 is the problem. I have another case ( #995649) currently open (DT3 crashes if open Preferences) which is a problem with version 3.8.4 in standard edition. Can you verify if this problem is dedicated to my edition/version as well?

No, there isn’t any difference in this behavior between editions.

When did you import/create these documents?

I don’t Import them I create them over the last years. Some of them are from 2020 and newer of course.
In Preview mode I don’t see an Author in the Metadata, but when I change to Edit mode the Author is visible (but still missing in the table view).

When I change something in the document, metadata changed and Author is visible, even in table view.

Very strange behavior. I’m not sure why this is happening. However, I can add the missing author data by opening and changing the documents. But that’s not a nice job. So if you have a tool that I can use to create the author data in a batch I would be very grateful. 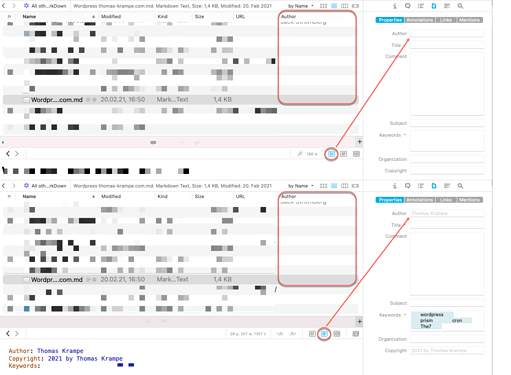