I know that it is a significant extension of what DTPO supports but I’d LOVE a checkbox/list file type that is available in both DTTG and DTPO versions. I’ve looked at many other task, grocery and list managers and all depend on some cloud service I do not control (iCloud or DropBox or similar) or do not have a desktop version or do not have the simple solution of a template I can duplicate and use once as I do a tasks.

I do use Omnifocus and while I can create templates for tasks in it it does become cumbersome for these sort of very large checklists. (700-800 item).

Keeping as much of that in the few apps I want to use that work across all my devices, desktop, laptop, tablet and phone is critical.

With tasks lists I go the Numbers route and have it indexed in DEVONthink. This works well for me.

As far as the subscription argument goes I am generally against them and if a software goes to subscription I will look for an alternative that is not subscription. When Adobe made the move I did this, found and tested some alternatives and settled on the DxO suite of software together with an old (free) version of Lightroom; I mention this not to advertise DxO, (I could easily have chosen something else but DxO just suited me more) but to make the point that if you look around there generally is software that will do the job as well and sometimes much better than the subscription one. Interestingly I found that in making the move from Adobe I have hit upon a suite of applications that sits me better and which I find simpler to use with better results.

Lesson of the story? Perhaps it is good to occasionally have a look to see if alternatives are better.

When you only go shopping once a month or even less frequently because the nearest major place to shop is a 150 mile round trip and you use a large four door pickup truck with a shell on the back so lots of cargo space it’s easy to have a shopping list that contains several hundred items to get. The total list though is much larger. I hate having to redo things so I use the giant shopping list as a reminder of the things and brands of stuff we buy.

Apologies for the length of this

I would respectfully disagree.

From a productivity point of view it’s fairly well known that spreading your tasks and projects between apps slows you down and adds the risk of missing something. There’s also enough study coming out now to indicate that switching focus, even though temporarily can cost you 30 minutes to get back to how you were thinking before the switch. I appreciate that “one size fits all” doesn’t exist, but DTPO comes pretty close.

I would (politely) challenge some of this, on three grounds (all of which are highly debatable):

It’s funny how “many/most developers are having a hard time making a living producing $5.99 apps even at $29.99 and higher” argument is so often touted. Yet the fact is that software has thrived for the last 20 years. I appreciate that subscriptions makes things easier for developers, but many will lose out as the market is already saturated. I’ve had 6 apps in 2 months go subscription. The result. I’ve decided not to support this model of revenue. I do not personally like it as a consumer and I simply cannot afford it. I think long term we’ll see many apps go under as people realise they cannot carry the cost.

I don’t know whether developers are having a hard time or not (some certainly are). Apps have got cheaper, in some cases by orders of magnitude. The overall market has grown by several orders fo magnitude, which increases potential revenues, but also increases the potential support load. Once upon a time, price was a barrier to entry for users, so they had a real need or a real belief before they paid your high price; your customer base was a cohesive group of like-minded people. Now, you’re trying to support everyone from the dedicated pros to the (forgive my rudeness) half-educated dilettantes who want the app to “just work”. Not to mention annual radical OS updates and short hardware cycles.

I can see that it’s a problem and I can see why you might make a rational commercial judgement that subscription is the best way to go. I think the apps that survive as sub-only will be those that reward subscribers by (a) being good and (b) supplying frequent, substantial updates. But, in truth, most of them won’t survive. As you say, after a year or two, people will start looking at their subscription outgoings and decide to trim them. To that end, extending your software to cover a range of uses might be a benefit (if you do it well).

Just to note - I do not subscribe to software. The overall cost can turn out to be massive (it wouldn’t take much for me to be paying hundreds or even thousands per year) and, frankly, a sa self-employed freelance project manager, I have to know that I can keep my tools during the inevitable lean periods.

I personally find my productivity is increased if I do not need to switch apps. The more I can do in one app the more time I save (and ultimately cost). Maintaining deep focus is important for me and app changes tend to break that focus. Many apps such as Bear do not have any significant functionality over DTPO simply because they are text editors (which DTPO does very capably). I’m often drawn to these apps because of their nice UI not functionality. How many apps do we all have that simply overlap a massive amount in functionality? I have wasted no end of time looking and trying apps and then porting data and re-porting it. I’m finding that spending that time to learn my current tools well is a far better investment.

In the end I believe less is more when it comes to apps.

I am happy to agree that some of us spend (waste?) far too much time trying to identify the perfect app for the job, and should maybe just get on with our work

@ThatGuy: No worries and an interesting op-ed.

Is there a way to create a checklist (one in which I can tick off items as they are needed) in DT?

There is a Task List template (Data⇒New from Template⇒Productivity⇒Task List. It contains Checklists that can be used.

If you like OF you will probably like omnioutliner which supports status checkboxes and also column checkboxes.
If you put your omnioutliner files in iCloud folder or other cloud folder then you index that folder so you can see all your outlines in DT but can also open them easily from the app on iOS.
It’s a reasonably elegant solution. I agree with your sentiment about not putting all lists in OF and cluttering it up. Also if you wanted you could save your files with checklists as a template in omnioutliner and reuse those as you see fit.
There is also a button in the toolbar to open a file in an external application so when you’re in Devonthink you just click that button and it will open your files in omnioutliner by default.

Glad that template is proving useful to you.

Just thought I’d mention my solution to this here, in case useful for someone. Nothing new conceptually – I’ve seen a number of mentions of using some form of text expansion to achieve checkbox lists. But perhaps a small new element in the implementation, which might be of some interest.

By way of background: In my workflow, I make a lot of notes on a project as I go, to document what I am doing and why, and how I am solving a problem – and I often make a checkbox list at the end of one segment of the project, to take stock of where I am, and as a guide to what I need to work on next. I’ve been making the checkbox lists right at the end of my notes on the particular segment of the project, all in OneNote. For me, it has felt really valuable to have the checkboxlists integrated with my documentation notes.

Now that I’m attempting to switch to DT, and having settled on RTF as the format I’m going to use for notes, I found that clickable chekbox lists are not possible within an RTF. I therefore experimented, as people have suggested here, with using checkbox lists in a different document that is still accessibel from DT (OmniOutliner; iAWriter; Notes; a Task list template) – but (for me) this felt disruptive as compared with having the checkbox list embedded in my notes.

So, my current low-tech solution (which hopefully will work well enough for me) is as shown below. Not real clickable cheboxes, but visually distinguishable nevertheless (both as to-dos, and as completed to-dos), and right where I want them in my RTF notes: 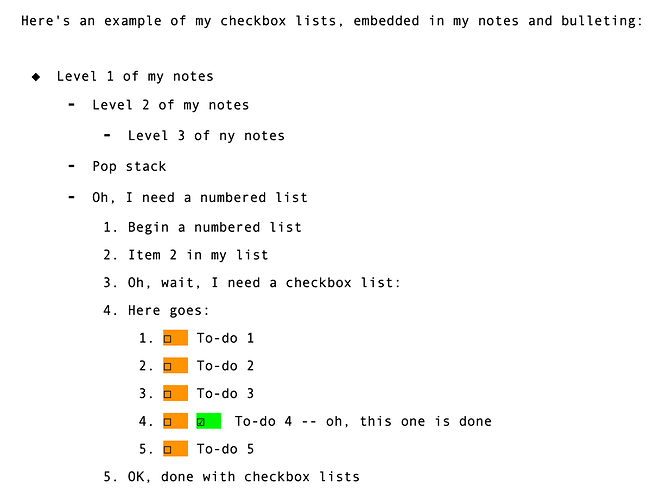 This is done using two snippet expansions in Alfred, with keywords !td (for orange “to-do”) and !dn (for green “done”).

So far, working for me … YMMV