Just a simple request: textbundle files don’t currently display on DTTG. It’d be great if that could be improved!

Textbundles support may be in a future release, but they are not widely known or used.

Thats the problem isn’t it? Programs do not use it because it is not widely known or used. It is not widely known because programs do not use it. I like text bundle a lot since it takes that folder with a bunch of pictures and files and makes it one easy zip file that makes it easy to open across different programs. in the age of iPhone sharing, it solves that hassle with sharing markdown documents.

easy to open across different programs

But again, this requires buy-in from other developers too. Bear in mind too, the project hasn’t seen any obvious activity in a long time (Textbundle 2 was released in October 2014).

That being said, it’s still on our radar for potential enhancements to future releases.

Just wanted to add that I’m seeking it out because of Ulysses’ support—it’s the best way I’ve found to get reliable (e.g., effective across platforms) image embedding within a markdown file. As far as I can see textbundle is gradually gaining in use across these markdown word processors.

Is there a way to use DEVONthink item links to achieve this universally on macOS and iOS? If so I might switch back to .md files.

(For clarity, the current non-textbundle workflow is approximately…

Hi there! I’d like to add my vote for this particular feature. I know it’s not widely supported but at present, here are two major applications that I have evaluated and that do support it:

Moving from those apps to DTP would be easier with text bundle support. And those two apps are simpler than DT, so it does make sense that someone might want to migrate from Keep It or Bear to DTP.

This may be a feature of the next major release, but I can’t promise what degree of support will be included.

Formatted Note gets oversized easily, which make it un-loadable in DTTG. It’s difficult to get style in control, making articles display varying in font styles like font size, then some articles are good to read on DTTG, while some others are not.

Rich Text’s format is too complicated for most circumstances, and .rtfd is also easy to get oversized. Editors for rich text are outdated both on macOS and iOS.

Web Archive keeps content well-formatted. Thanks to the web adaptive layout techniques, it provides great readability on different devices, but sacrifices editability, and ads bothers, too.

.textbundle seems to be the only way to keep content more editable and well-formatted with images inside, being able to keep most documents in the same universal and consistent style.

I’m not sure what you’re referring to here. Markdown works with images quite well.

.textbundle seems to be the only way to keep content more editable and well-formatted with images inside, being able to keep most documents in the same universal and consistent style.

Not if you use a consistent directory structure, which is technically all a .textbundle file is.

I’ve been using this structure - no different than many websites would use - for a long time now and it works a treat.

PS: I know this is in the DEVONthink To Go forum but my comments are about general support of the format on macOS as well. 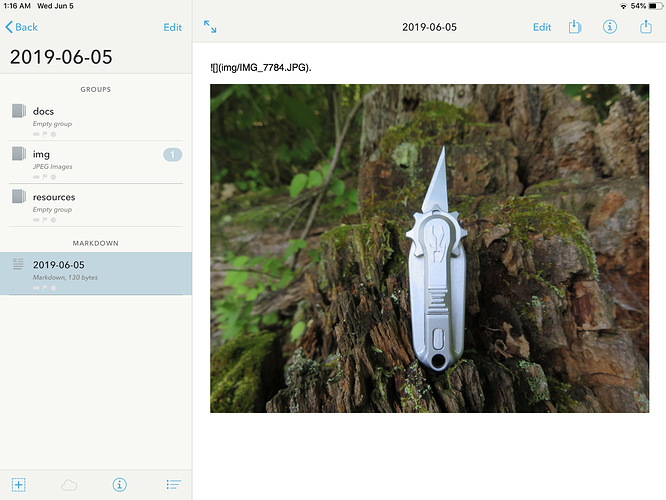 Just something to consider.

Or do all the markdown files in the top group share the same images subgroup?

Secondly, you’ve said that you mainly use markdown and don’t use other editors. Do you have a consolidated list somewhere of the tricks you use to get the best out of it in DT, given that some of the most advanced features seem tied to RTF (or are easier in RTF)? Links, for example, can be incorporated manually (copy item link, copy, surround with brackets, rename) - you can write scripts to do this, but it¡s not built in. That’s just an example, but in general, there is a bit more ‘friction’ to using markdown than there is for RTF.

I think an article in which you explain your markdown workflow in DT with any scripts / tips to get the best out of it would be really useful - of course if there is one and I’ve missed it, my apologies!

(And sorry for adding to the inbox…j

This is not an AND/OR situation, as you can certainly use any variant of your suggestions.

Personally - due to my mindset from 30+ years in graphic arts/printing/service bureaus - I often segregate items into their own consolidated packages. So in my case, I have a group containing the appropriate subgroups and a single Markdown file (this is a daily journaling example). It’s also due to my continued self-education of Markdown, HTML, CSS, Javascript. Evolving experiments allow me to keep the effects isolated to a given document, leaving previous ones untouched. Again, this is my particular approach for my mindset.

I have made a note about a future, more lengthy diatribe when time allows. Cheers!

Thanks, Jim — that’s helpful and interesting! (And I look forward to the diatribe…)

I would appreciate the “lengthier diatribe”. I’ve picked up useful snippets from your posts on the usage of Markdown in DT.

Maybe it’s because of me regarding DT as a database for document, I think a group with an MD file and related assets inside don’t act like a document, like I cannot get a preview or edit the text content after I click the group — I have to open/unfold it, and view/edit the MD file in it.

Besides, a group for me serves as a collector of documents related to the same topic/event. A group resembling a Text Bundle structure, instead, serves a different purpose, and it will be listed with those topic/event groups, which makes the list weird.

It just makes me not feel right.

In sum, I think these two basic components, groups and documents, should act and serve in their own way separately.

I know this is chiming in late, but I adopted @BLUEFROG method and line it a lot…but…

I have to open/unfold it, and view/edit the MD file in it.

this also annoys me quite a lot.
@BLUEFROG: do you think devonthink can ever implement this feature (as an option) where if a group contains a .md file and your in a group with cursor (just the group icon not drilled down) we can get a preview of that .md file? if so how can one request such a feature?

that would solve imho a lot of the issue

how can one request such a feature?

I would also like to vote for DTTG support for textbundle.

You can also add Craft Docs to the textbundle list