This script within TextExpander works correctly in its viewing/test mode: 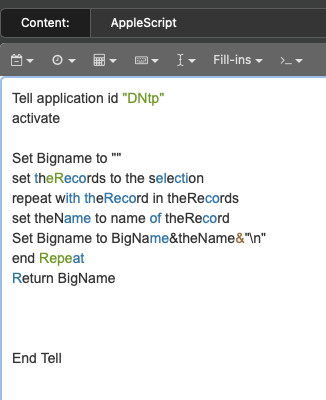 The question I have is how I get the response to appear when I execute the TextExpander snippet. 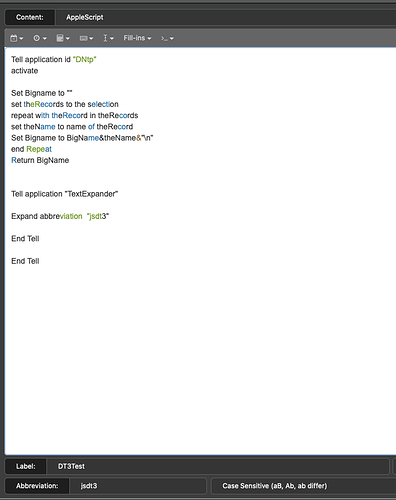 I know I am close - what am I missing so I can return the Applescript response as the output of the snippet?

I don’t use TextExpander but doesn’t it highlight the line it’s erroring on?

It does not highlight it, but by trial and error I know the problem is this line:

That line seems necessary based on the documentation. But interestingly I cannot find either “Expand” or “abbreviation” in the current Applescript dictionary for TextExpander.

So I expect there may be some newer or alternate way to specify what text should actually be inserted as the Macro response.

I cannot find either “Expand” or “abbreviation” in the current Applescript dictionary for TextExpander.

Why did you use those commands then?

Why did you use those commands then?

Because that is my interpretation of the documentation here TextExpander Help: AppleScripting TextExpander - but I am certainly open to other ideas 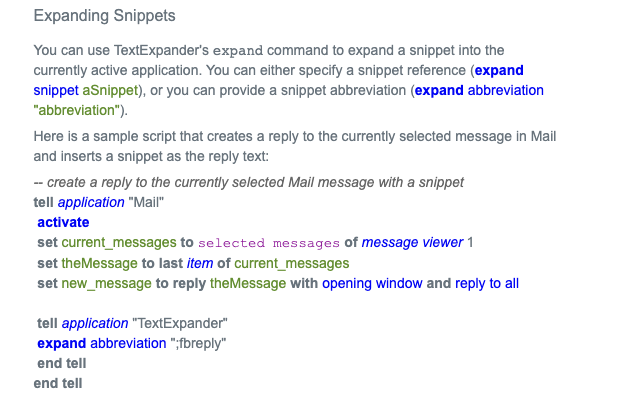 Move the TextExpander tell block out of the DEVONthink one. The editor is definitely showing weird formatting in your screen captures.

(And though the formatting looks weird - it works fine in the TextExpander preview if I do not using the expand instruction.) 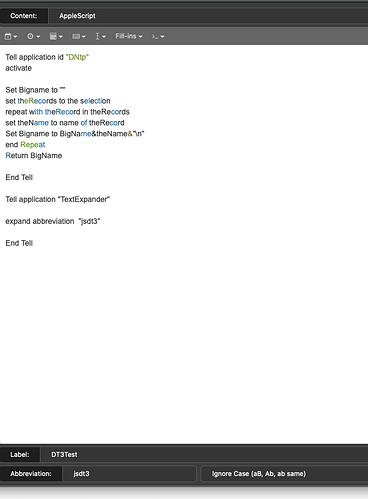 Try writing the script in Script Editor instead.
Like I said, I don’t use TextExpander.

Interesting - that gives us another clue

So the documentation is wrong?? Or something changed? 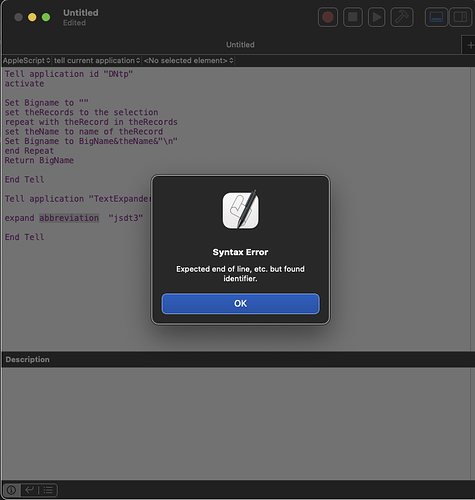 So the documentation is wrong??

OK I will ask TextExpander support - thank you

Open a new script in Script Editor and paste this…

According to the info you posted above, this would appear to function. Does it compile correctly? 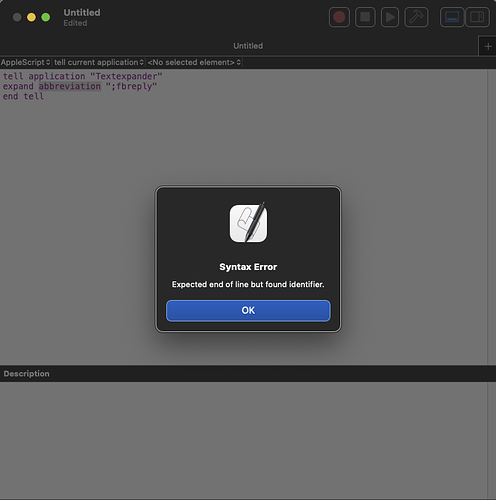 Yeah, I’d ask the TextExpander folks on this one.

Will do - thanks for the effort trying

As Bluefrog mentioned it’s always a good idea to write scripts in a dedicated script editor app and to paste the working code into other apps. Doing so immediately showed that abbreviation isn’t part of the current TextExpander version and that the linked documentation is not for the current version (as you meanwhile know).

And you don’t need to activate DEVONthink to get its selection.

This works over here:


If you want to know why an expansion that uses AppleScript doesn’t yield the desired result include an error Handler (as I did above) that uses activate to bring the app in question to the front. Without the activate the dialog would be shown anyway but chances are you won’t see it until you activate the app again.

Adding something that tells you that an error occurred is a good idea as without it it’s probably getting quite confusing: You’ll hear TextExpander’s sound but there’s nothing inserted.

You are indeed a scripting genius

Thank you for contacting Smile Support. I’m sorry to hear that you’re having trouble with your snippet but those AppleScript commands did not make it into the most recent version and there is not currently an alternative. I’ve relayed your request to put this functionality back into TextExpander to our engineers and they will investigate doing that for a future update. If you’d like, you can move back to the last version where these AppleScript commands were available:

(Note: You can drag this version into your Applications folder which will overwrite the existing application. You can also rename it before dragging to have both versions on your computer. However, only one version can run at a time. Your snippets are safe in a different location and on the TextExpander server.)

Also, your case is now linked to the open request so we will reach out when the issue is resolved. Let me know if you have any other questions, comments or concerns.

Thanks for using TextExpander from Smile!

This looks very interesting, and fantastic that the DT users are so willing and able to help!

But, if you don’t mind the question — could you maybe explain what you are actually aiming to do with the above? I’m sincerely curious, btw! I’m a heavy TE user as well, but would never have thought of inserting data from DT into a TE snippet — assuming that’s what’s being tried here?