The Adventure of the Supplemental Chinese Characters

Let’s imagine someone had installed the 13.2 beta of iPadOS on his (or her) iPad and the oh-so-shiny Golden Master of Catalina on his Mac.

When that irresponsible, imagined human being wrote an MD note on DTTG and synced it via iCloud to DT Pro on his (or her) Mac DT’s inspector would show “Kind: md 文件”. You can stay calm, “文件” isn’t anything naughty but means “file” in Chinese.

DT would display and allow editing of the md 文件 just as a md file without the Chinese supplement. But the smart rule that is supposed to automatically convert the MD to RTF would refuse to do so as md 文件 lies out of its jurisdiction. (RTF does sync to RTF just fine, by the way.)

That imagined, irresponsible, gullible—some might even feel an unstoppable urge to come up with way harsher terms—person would without doubt be too ashamed to admit that (s)he was so irresponsible &c. and therefore would not report the bug. Which would be a shame on its own, wouldn’t it?

Could this shameful person post some screencaps and/or start a support ticket?

Or to be more precise: I wanted to post a screenshot quite fast but first wanted to reproduce the incident. But at that time synching via iCloud worked at maximum once per day. Thank you, Catalina! (No, I did not set DEVONthink to sync once per day.) And only after that I forgot.

Meanwhile I don’t think a ticket would be appropiate because it is a macOS wide phenomenon.

But screenshots you will get:

That’s how it started with a md file synced from DTTG. Admittedly I stared quite baffled at the inspector pane.

chinese_markdown_in_the_finder.png710×74 9.06 KB
These md files were created with iAWriter on the Mac.

When I played around with a smart rule and wanted to replace temporarily the Kind condition by the Extension condition I found the Chinese characters even there: 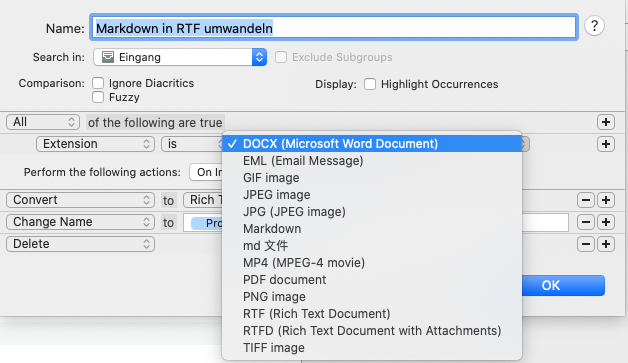 While the first screen shots was taken on a Catalina beta the latter represent the present day official release version.

I am having the exact same problem. I don’t know what trigger it but it is pretty annoying. Have you found what is causing it and how to stop it?

The kind (see parenthesis on screenshot) is retrieved from macOS and should only depend on the file extension and the installed third-party apps (e.g. Markdown editors).

Hi all,
I recently updated one of my machines to Catalina and I just noticed what is reported by the OP (Chinese characters after the .md extension). It is not a problem or bother, but I was just curious if the cause had been ascertained. I don’t remember noticing this before the OS update. I use Typora as Markdown editor. Thanks!

No culprit I’m aware of.
If you create a Markdown document in DEVONthink, then Control-click it and choose Show In Finder, does the Kind show with the Chinese characters?

yes it does! not a DEVONthink issue, then…
thanks for checking

@gi0vanni Did you find a (DEVONthink-independt) fix for the Chinese characters?

@halloleo it was due to using Typora as a default MD editor. Not sure if it was fixed. I have since switched to MacDown.

For some days now I had felt the urge to report that finally after all that time “MD” plus the Hanzi character had been replaced by “Markdown Text Document”. Both in DEVONthink and in the Finder.

But I didn’t because I’m a DEVONthink beta tester and even if I don’t think md 文件 is DEVONthink related at all I dared not to not give something away that might come with its next official release.

And why am I coming forward now? Because this very posting made me check DEVONthink again—and believe it or not, md 文件 is back (in the Finder too)!

Yesterday it was okay, today it is not. What happened in between? Well, I updated to the fresh Catalina beta. That can’t be coincidence. And dearest Apple Inc.: If you think that by posting this I had violated your NDA I suggest you give it a closer look to check if it is not actually an NDA 文件.

Well, I updated to the fresh Catalina beta.

Are you on the time travel beta, too?

Not yet (if that’s a proper term in this context). Where can I sign up?

Thanks @gi0vanni. I can’t recall what Markdown editors I have experimented with. So for the moment I just live with the funny File Kind. I’m sure when I do a clean install for the next major OS upgrade it’ll disappear…