I have a lot of dictation audio/iOS voiceOver files in my document collection that I would like to with DevonThink.

The workflow is like this. Audio is captured from Meetings/Lectures. Notes are created in markdown, but I need to refer in the markdown file to a specific time in the media timeline where some concept, or point is being discussed. So when reading the notes at a later time, the link will allow to quickly play the mp4/mp3 file with the playhead at the specified time.

Is there a way to add annotations or a link to a point in the timeline of a video/audio file ?

If you are playing an imported audio or video file, you can use the Tools > Annotations & Reminders inspector to create an annotation file for it. In the Annotations dropdown, there is an Insert Back Link command. Using this on such a file will insert a timestamp to the annotation file. 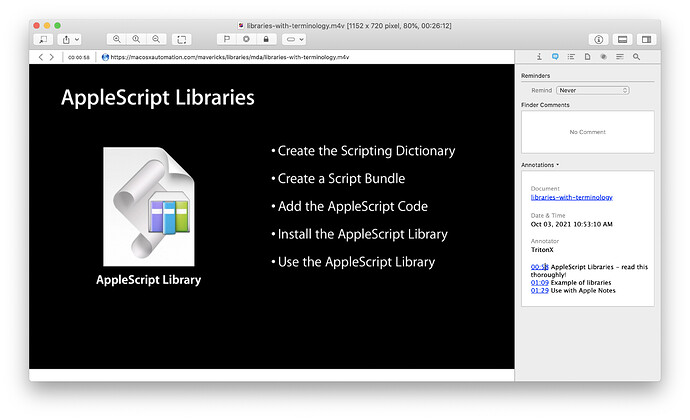 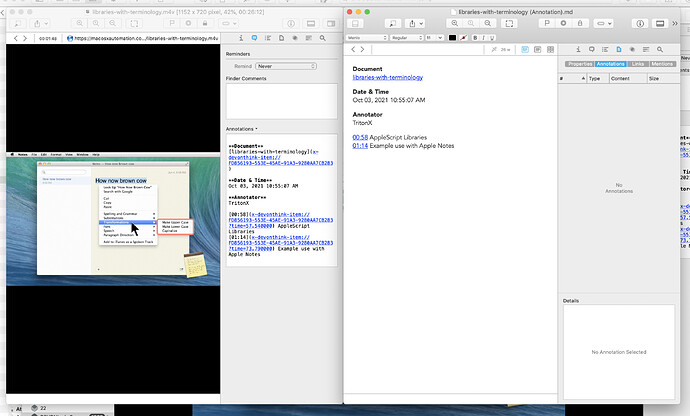 One more thing,
should the annotations added with the Backlink command be saved with the file to make this work, or is that step only to make DevonThink generate the Link with the Timestamp?

I’m not sure I understand what you’re asking.

For an Information organiser, this is very useful for students/interviewers.

One humble suggestion to DevonTechnologies (don’t know where to post it) is to do some SEO on keywords “Annotating Audio & Video Files”. Because I have been using Google to search for a Mac OS App that did exactly this. And never once in the last 2-3 years did DevonThink come up in the search results. Who knows, if it is some google filter bubble effect or shadow ban effect. The Algorithm kept suggesting results about an outdated Mozilla JS library popcorn.js

I would not have stumbled upon DevonThink, unless I decided to read about the note taking app “Zengobi curio” which led me to “Hook for Mac” whose help showed a list of linkable apps which led me to DevonThink.

I would not have stumbled upon DevonThink, unless I decided to read about the note taking app “Zengobi curio” which led me to “Hook for Mac” whose help showed a list of linkable apps which led me to DevonThink.

In such cases I create a note about how I’ve found an app. Stumbling about such a note after some time is very nice. I’m always thinking “What if I had not followed that link. And the next one too. And …”

Your suggestion is noted and thanks for the nice comments

ive been trying to use markdown for annotations but its grayed out. is there a reason why my .mp4 file only allows me to use rtf? @BLUEFROG

i also have subtitles with the same name for my .mp4 file as .srt but it seems that devonthink does not allow subtitles. i use IINA for this. is there a workaround for devonthink?

okay so it accidentally was triggered as an rtf annotation so it grayed out the markdown one, i was able to delete it and then restart the annotations as markdown

is there a workaround for devonthink?

If you start an annotation file by just typing in the Annotations field, it creates a rich text file.
You can use the New from Template > Default Annotation - Markdown option to use a Markdown file instead.

As a side note: You can create a Markdown file and add it to ~/Library/Application Support/DEVONthink 3/Annotations.noindex. It will then be accessible as your own template in the aforementioned dropdown.

super nice, i just made it right now. i truly appreciate it!