Is there a way to not having the trash items having “strike out” font? it makes those lines really hard to read. Thank you.

This can’t be disabled and marks items which will be permanently deleted. E.g. items having replicants outside the trash won’t be deleted.

It would be great if we could influence the list style.

This is just very hard to read.

It looks a lot better over here:

What machine/OS did you take your screenshot on? And did you change any of the font preferences, either globally or in DT?

I actually don’t know, but an Idea would be the font size. 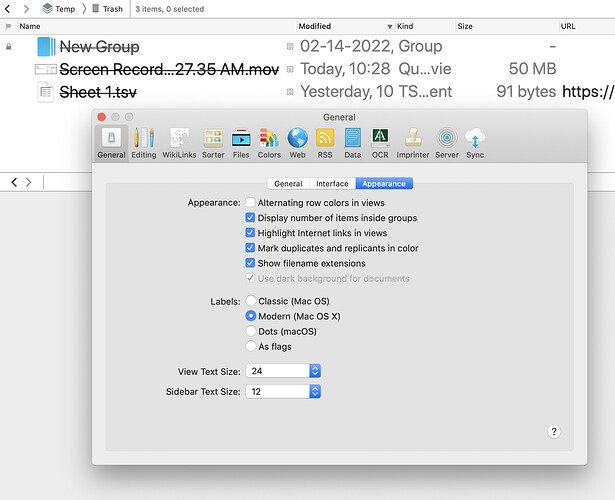 There isn’t a font face setting, only a size setting.

So yes, I can of course set the font setting to maximum (I’ve it at 14), but then I’d just rather do that only when browsing the trash. The reason I browse the trash occasionally is that I want to have one final look.

It would be much more easy having a button that toggles that strike out font.

This is the only request we’ve received but it’s noted.

It looks like a bold font to me. Mine is „normal“.

The items seem to be unread.

I already mentioned that I also find it hard to read:

Possible to change appearance if all instances are in the trash

Possible to change appearance if all instances are in the trash

What kind of appearance do you have in mind?

To my mind if something is in the trash folder it is clear it is scheduled for deletion, the documents don’t need to be struck through as well.

E.g. items having replicants outside the trash won’t be deleted.

Never got my head round replicants!

Think of them as hard links (if you’re a Unix persion) or aliases. Suppose you have a record A containing only “hello world”.

If you create a replicate (let’s call it B for the sake of the argument), it will contain “hello world”, too. Now, if you open that record B and change its content to “goodbye world”, the content of A will be “goodbye world”, too. Whatever you change in one of A or B will change also in the other one. Think of them as merely pointers to the same thingy on disk (or as two views onto the same thingy or whatever metaphor you like). If you delete one replicate, the other one will remain.

If you create a duplicate of A (again, let’s call it B), it will of course contain “hello world”. However, if you change that to “goodbye world” in B, nothing will change in A. Duplicates are completely separate entities that start out as copies of each other. They can change in every which way they want after that without influencing the “original”. In other words, duplicates are only duplicates as long as you do not change one of them. After that, they are two completely unrelated records. And, as with replicates, if you remove one of them, the other one remains.

Having said that: If you have a record with at least one replicant and you move that into the trash, the other replicant stays where it is. And if you empty the trash, this “other” replicant will still be there (i.e. in one of your databases). So “deletion” does not mean “complete removal” for all types of records.

OK, first of all, great. That makes a lot of sense.

Now, can you describe a scenario where the use of such replicants actually makes sense?

One I can think of is that you’ve an item in one place in your database, say, one folder, and you also want to have it show up in another folder. Similar to what you’d do with tags. But maybe I’ve got it all wrong.

One I can think of is that you’ve an item in one place in your database, say, one folder, and you also want to have it show up in another folder

Exactly. A slightly contrived example would have one group for invoices and another one for warranty documents. Instead of duplicating the invoice for, e.g., a washing machine, you’d replicate it into the warranty group. From where you can easily remove it when the warranty period is over without doing any harm to the invoice group.

Agreed… to your mind. Many people put things in the Trash with no such clarity.
I recently had a ticket from someone who have almost 38,000 items in their Trash.

I know someone who’s boss in the early 2000s would burn through company issued laptops on a regular basis. At least one IT department tech found out the hard way that when servicing said laptops, one never emptied the trash because the boss used the trash as a temporary holding place for thousands of files. Eventually someone noticed that in the boss’s office the real world garbage can was blocked by a stack of files on top of filing boxes. A photo of that arrangement made it to the work bench in the IT department with a large note explaining why you never emptied the trash on those computers.
No matter how clever the programmers are, someone will always find a way to use something in a manner no one can ever expect or plan for.