I have an idea to resolve the problem I have with indexed items when they are in cloud synchronized folders. Does not matter how I organize indexed items located in clouds, I end having duplicates. Duplicates made by DT (with a “-1” added to the end of the file name). It happens in Drobpox, OneDrive and iCloud Drive. And yes, it happens with always synchronized folders. If sometimes I mistake a folder and set it “on demand”, the generated caos is impressive, but I’m referring here to always available folders.

When you index removable drives, this problem does not happens. If the drive is unmounted, DT3 does not try to re-sync or analyze or whatever DT3 use to do on indexed files. Once the disk is mounted, it looks inside indexed folders.

My idea is why not have an “offline/online” button to tell DT3: look/not look inside indexed folders if they are set in a cloud, as it has internally on mounted/not mounted disks? I know it has a hidden option to not to look into indexed, but I mean have it in toolbar or an option menu…

The next release will include some cloud related fixes & improvements.

Hi, @cgrunenberg, 3.0.4 still has the same issues with cloud folders as 3.0.3. See capture. Nothing I can do to remove false duplicates. “Update Indexed Items” and “Synchronize” in File menu does nothing, only manual removal works. It is a Dropbox “Local only” folder. 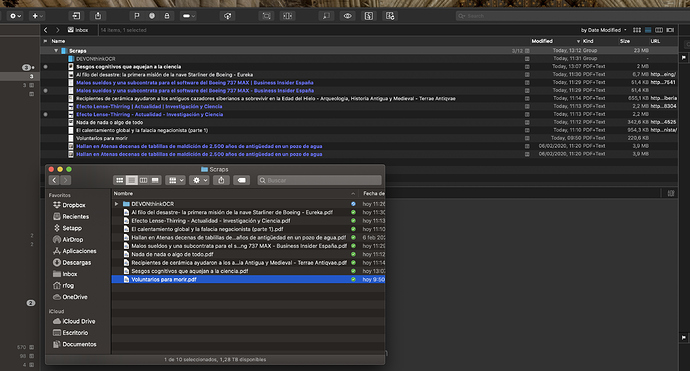 What’s the path of the folder? And do you know which action causes these duplicates?

Path is in my profile, Dropbox/Documentos/Scraps, in all 3 Mac. Even the profile absolute path is the same, as my profile folder is rfog.

My installation is a standard one. No extra or strange drivers, no hacks, and in all cases is a recent installation.

I’m at work and I capture something. I drop in my windows dropbox folder, that syncs so and then with my office MacBook Pro, that index the files into DT. Other times I do the same on the same MacBook Pro, even scraping them via DT itself and then moving to the dropbox indexed folder -to be able to access them from windows anywhere.

When I arrive at home, I activate my iMAC and then, wow, duplicates, deleted files in external folder that still are shown in DT, etc…

There are one iPhone and two iPads running DTTG, mostly in the background because normally I don’t use them util I’ve processed some files in my home iMac, but I guess they are silently being updated because sometimes when I activate them, all files are synchronized. Or messed.

What could have been happening? I really don’t know, but could be two things: DT is faster looking into indexed files than Dropbox synchronizing the files, or DTTG is blocking in some way the indexed files.

But, a the end, an execution of “Update Indexed Files” or “Synchronize”, if I’ve understand well the meaning of those commands, should: look into the selected indexed folder and, if a file that is in database is not anymore in folder, delete it. If there is a new file, add it.

However, assuming DTTG has modified one of the deleted files, you cannot know if file has been modified in DTTG after it has been deleted from folder because the Mac could be suspended, but an educated guess can determine that if user has deleted an indexed file, it is because he does don’t want it anymore and then, if DTTG has a later modification of the deleted file, as that file is not in indexed folder, Sayonara Baby.

The fact is, when there are some duplicated non really existent files, or duplicated with “-1” appended to the file, those commands do absolutely nothing, and the only solution is painfully delete both kind of duplicates.

Said that, this issue happens only in synchronized folders that have daily changes. Normal not modified folders do not have the issue.

And in my case, I’m careful enough to not to generate impossible scenarios (Kobayashi Maru ones

) like modify same file in more than one device, or move it to one folder and to other folder in other device, etc… (Mac or iThing).

Are you only indexing the Scraps folder?

Yes and no. Yes because it is the only indexed folder in Global Inbox, no because I have 10 more databases with only indexed items, but those files changes so and then, and in general they aren’t problematic.

Do you have smart groups running, espeically on this database?

Default global ones that come with the installation of DT, plus:

All 3 global ones set in “Search in” Databases.

Nothing specifically linked to the Global Inbox or to the indexed folder.

Please post a screen capture of the rule you’re referring to. 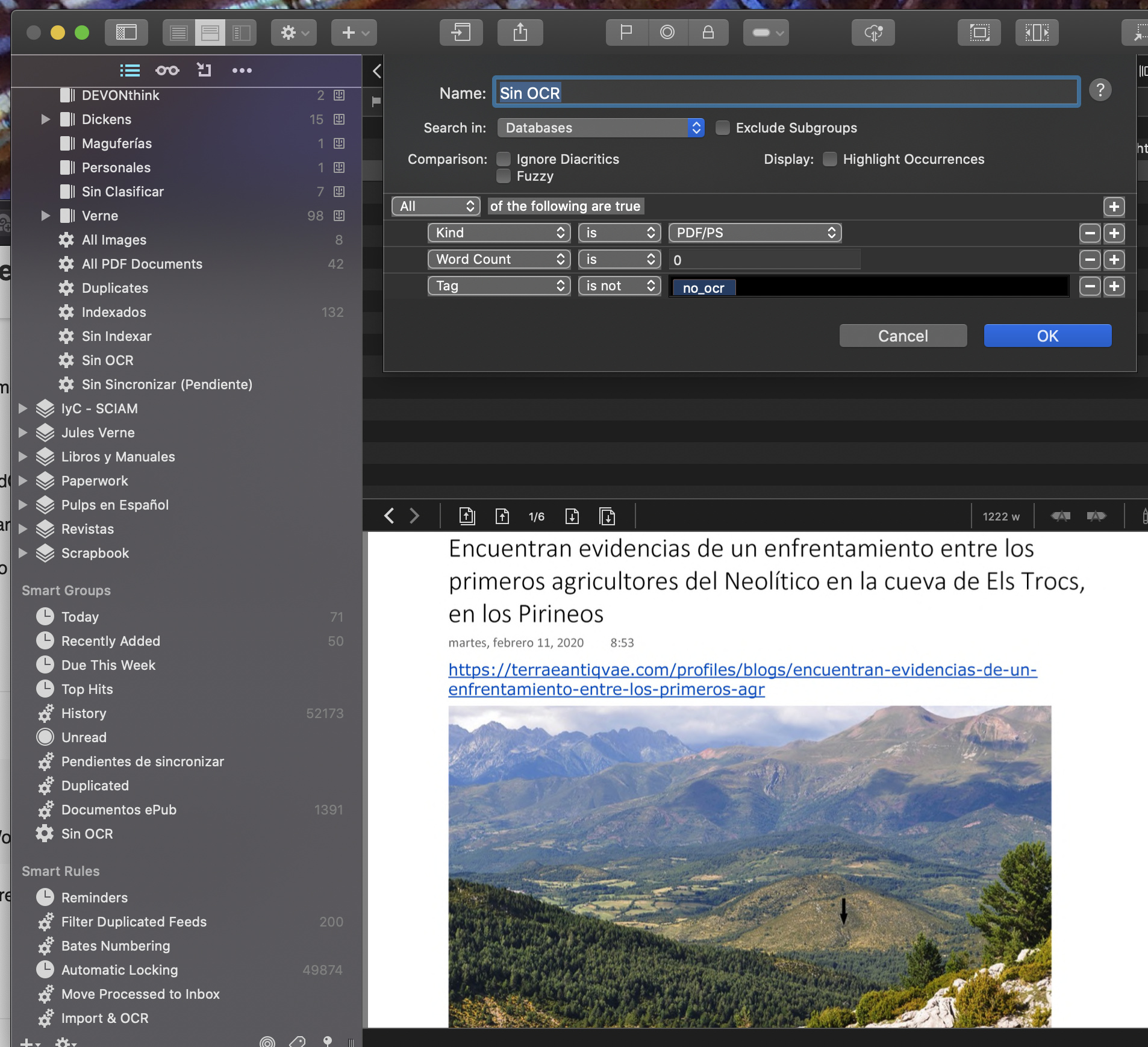 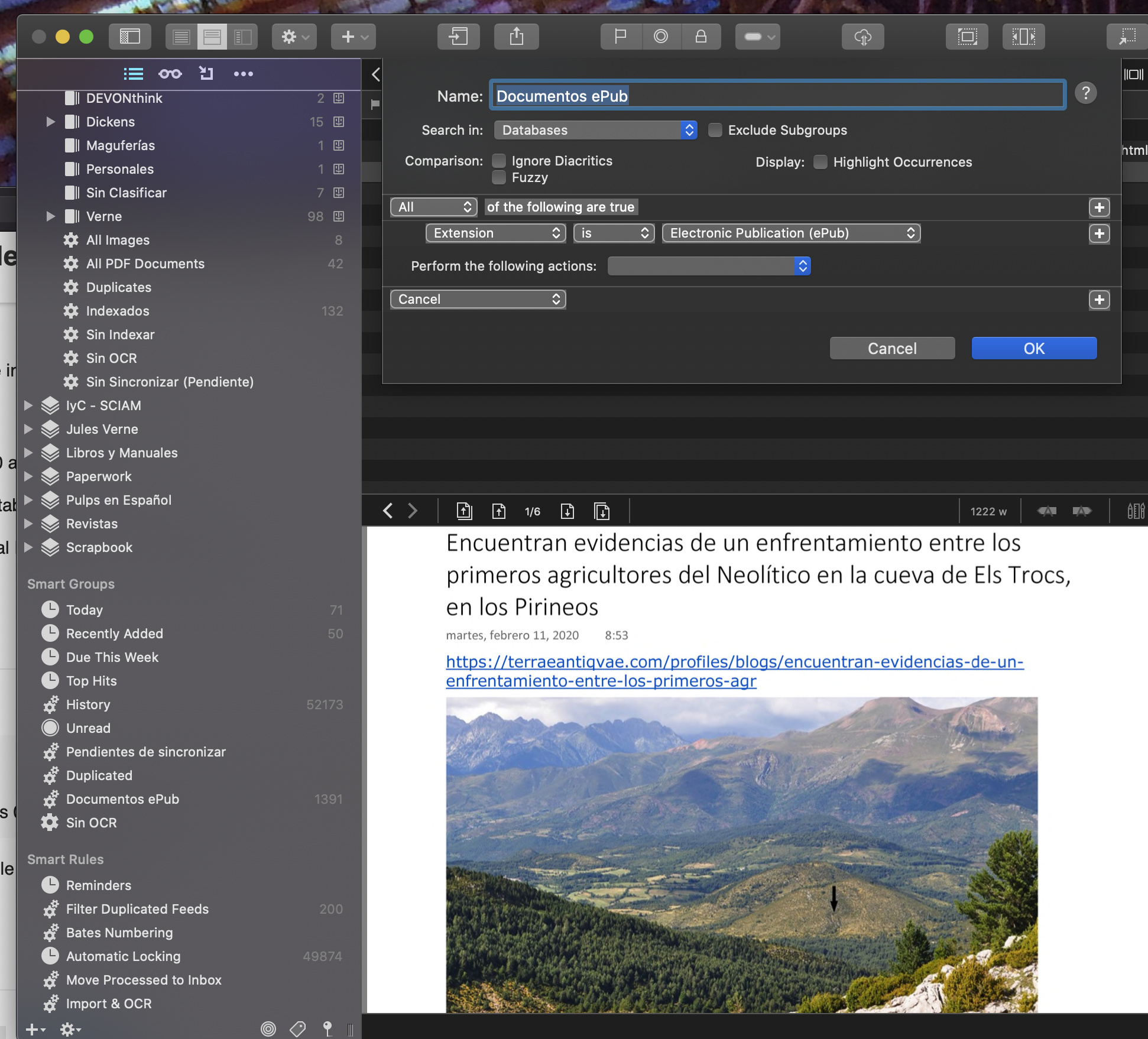 And the standard ones.

And in case you wanted to know my custom Smart rules,

I have an indexed folder in “Paperwork” database that OCR, and move to Inbox: 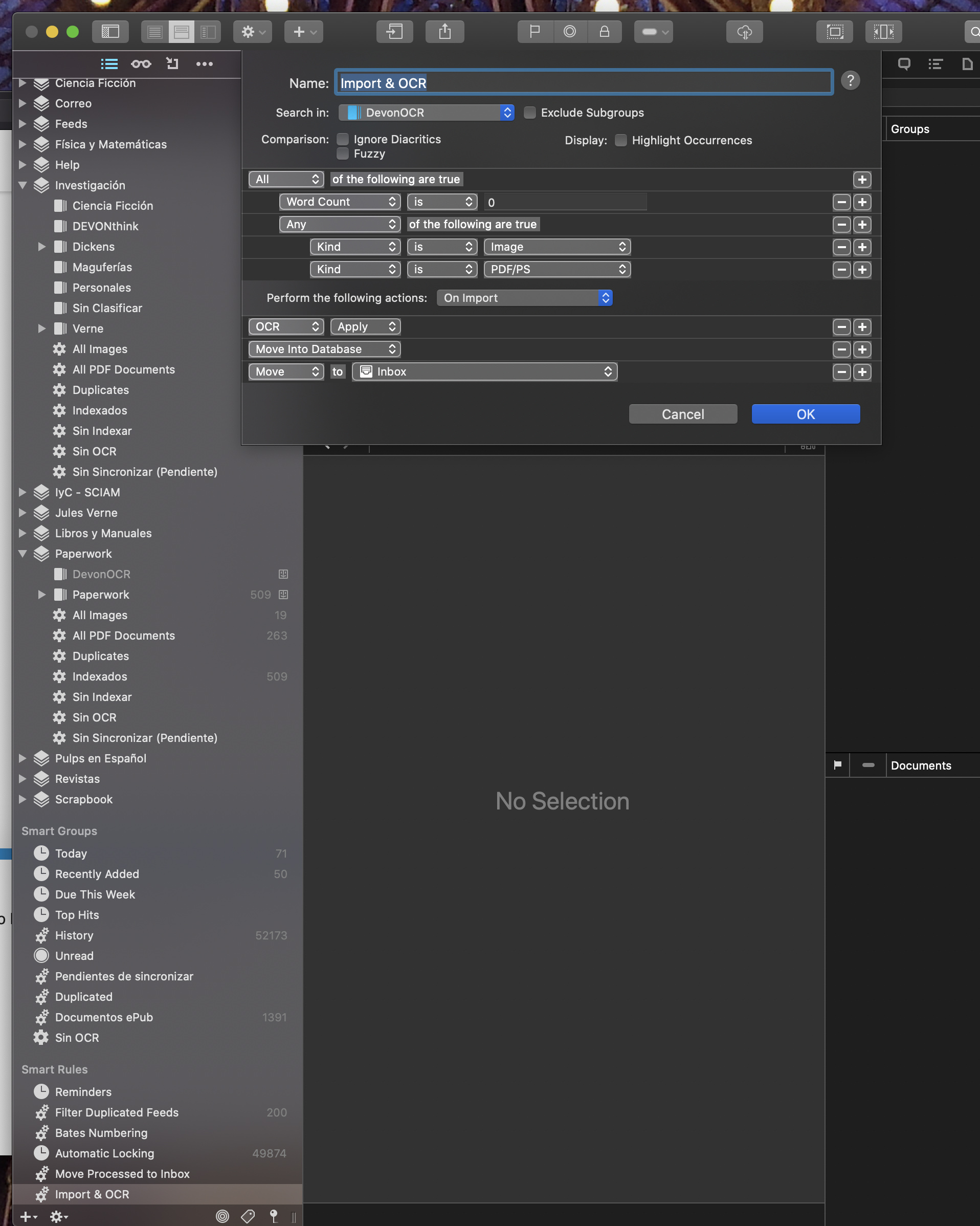 And another, manually fired, that converts and move to Inbox the formatted notes or pdf I generate in my RSS feeds database: 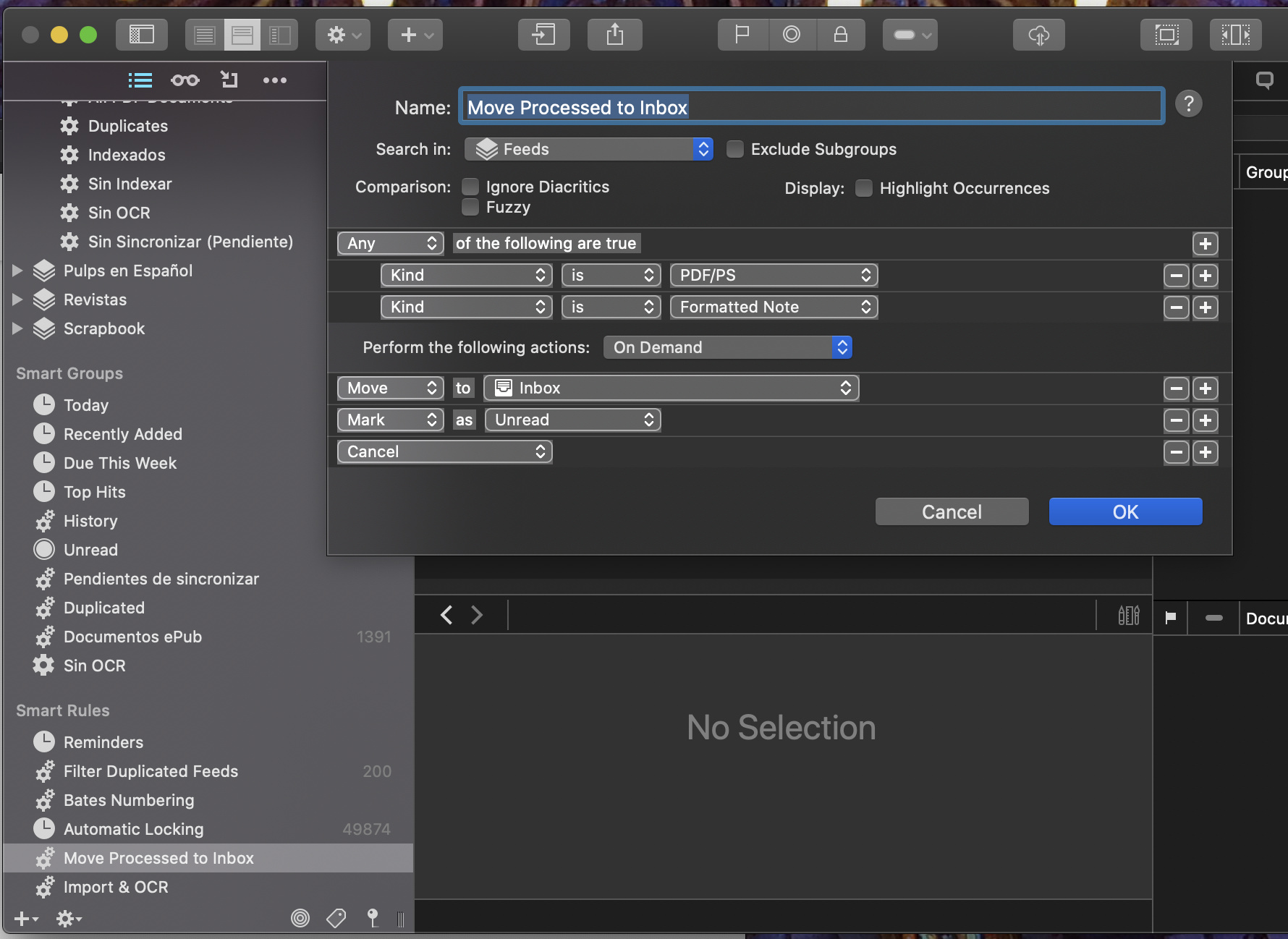 Perhaps it is worth checking if this is unticked in all sync stores:

And if you don’t have bonjour active (and sourcing the same database) on more than one machine.

Side Note: You should not uncheck this if you are running DEVONthink To Go, unless you are using a separate sync location with the contents just for it.

Yes, you told me about that in other threads, and I tested it. It lowered the amount of issues, but not completely, but then it forced me to have switched on my iMac always, even on weekends, when I use my MBP, for example. And as @BLUEFROG says, I use DTTG.

Perhaps you have a mac mini always on, but it is not my case and I don’t want to waste more money in more hardware with price of unicorn milk… I’m seriously evaluating not purchase more unicorn Apple technology anymore.

My next steps will be activate the hidden option to not automatically update indexed items to see if that resolves this, but the real thing is they must resolve this kind of issues. Yesterday another guy created a new thread here asking for a variation of my problem (in this case, in iCloud Drive). I remember DT2 didn’t had so many issues with indexed items.

Does this still happen after disabling the sync in DEVONthink To Go for a while?

I haven’t tested that. I will do and will back here when tested.

What could be better, set the Schedule to Manual or disable the location in DTTG?

Disabling the location would ensure that it’s never synchronized, not even manually.

I’ve done in my iPhone just now and will do later at home in my two iPads.