Tutorial needed to convert from evernote to Devonthink

I am disgusted with Evernote and their stance to remove local notebooks and now am searching for apps to replace Evernote. I downloaded Devonthink trial and it seems like a good replacement. But I need some help how to move my Evernote files to Devonthink. As a new user, it would help me if there was a tutorial so I dont have to do it trial and error setting up the structure and doing the import.

Also, is there a way to interface a Scansnap so that it auto imports to Devonthink?

I’m also an Evernote refugee
The actual conversion is automatic; but make sure you’re running Evernote Legacy on your Mac (I renamed it to Evernote)
In DT, select File > Import > Import Notes from Evernote 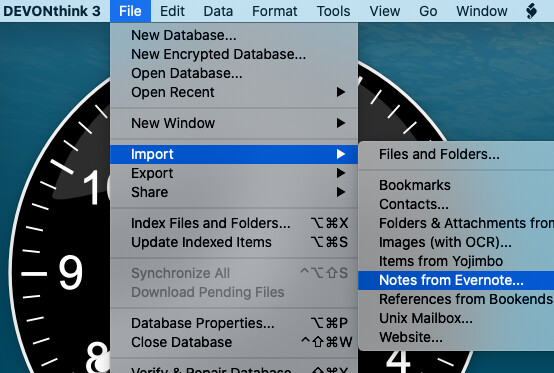 I basically had a single EN notebook of 14k notes, but I split it up to simplify the import to DT
An EN note converts to a DT note, but if there’s attachments we get a Group container
Notebooks convert to Groups
Tags convert to Tags

have moved over from EN in october and summarized my experiences here in the forum:

Moving from evernote to devonthink in 2020 DEVONthink

alright, this is going to be somewhat longer. also it is not so much for folks already using DevonThink, but for those thinking about moving over from evernote in the light of the recent massive feature & performance loss in the evernote clients as part of their move to the electron platform in version 10 of their software. also as a disclaimer: while I have migrated my data and processes over I am still learning (a lot), so my information on devonthink is likely an underestimate as I have just…

and, yes, scansnap works seamlessly with DT. all you need to do is change the app scansnap exports to from EN to DT in the scansnap app and you are done. at least I was…

If you want to get rid of unnecessary groups after the import see Quick way to delete ‘empty’ imported Evernote notes.

Thanks all. I tested the import by selecting one local notebook from evernote and then importing Notes from Evernote. It moved the files from Evernote to DT but for every note in Evernote, which consisted of one pdf file, there was now in DT, a group? of 2 files: the pdf and an extraneous useless file with just the name of the file. I couldnt figure out how to delete the extraneous useless file automatically. Help would be appreciated! Thanks

I couldnt figure out how to delete the extraneous useless file automatically.

I think that’s exactly what @BLUEFROG‘s script that I posted above does.

So i downloaded the Clean Evernote Imports.dtSmartRule.zip attachment

Double clicked it and it installed into DT. Then I went to Tools menu and clicked on Perform Rules and selected Clean Evernote Imports. A pop up window appears and I clicked OK. Nothing happened. What did I do wrong?

First off you didn’t use the script I linked to. The zip is an older version.

Never used Evernote so I can’t test. You’re talking about an Evernote note with an attachment, a PDF in this case, right? And the

extraneous useless file with just the name of the file.

is of kind Formatted note ? And it only contains one paragraph?

Oh, yes, its a formatted note. The other file is a pdf

how do I remove the old one and install the new one.

No need to remove it. Probably easiest if you just copy the new version of the script, then right click on the Smart Rule (in the Navigation Sidebar) to edit it, then click „Edit“ in the script action, delete the old script and paste the new.

Thanks, it worked to remove the extraneous groups! Now I will start over and import my entire EN data! i can replicate the structure and move files over from EN, Here goes!

I just did the standard import through the file menu and it worked well. It was a clear reminder of how much crap I actually shoved in Evernote, how much of it I no longer need, and how I need to be vigilant of not letting that happen again.
I’ll be deleting my Evernote account shortly.

It was a clear reminder of how much crap I actually shoved in Evernote, how much of it I no longer need, and how I need to be vigilant of not letting that happen again.

A fresh start often exposes the cruft in our systems. Glad you’re taking the time to recognize this and consider the future!

I transferred my entire Evernote local notebooks to DT with the help of the advice provided by people here. So many thanks.

One question though - I deleted my 50GB Evernote local database and found that my imported DT database was only 5 GB. Its not obvious what the difference in sizes are due to. Anyone have any insight? Did I lose data? Thanks

Thank you! This was a great help. I was frustrated because I didn’t realize I had to install Evernote Legacy to do this.

I decided to contribute and put in one place, a tutorial on Evernote to DT. Contributions are taken from other people, but placed in one place here.

In DT, Under File-> Import → Notes from Evernote. It will provide a selection of notebooks to chose from. Select all of them to import. It will take a while for all the notes to be imported into a Folder named Evernote. . For each note in evernote, it typically gets translated to a group of 2 docs, one with the note, one a file with the filename of the note. We need to get rid of the extraneous file and convert the group to a single file, using a smart rule.

Wait a long time. You will will see the invididual folders in Evernote change so that the extraneous groups dissappear.

When it is finished, you will need to manually eliminate a few of the groups that were not processed correctly by opening the group and dragging the file up and then deleting the group.

Then check to see that the number of docs in DT match those is Evernote to see nothing is missing.

When you are sure that you have imported everything, you can delete Evernote and the databases. You will need a app cleaner like App-cleaner to remove everything and recover space. Thats it!
Go to

For each note in evernote, it typically gets translated to a group of 2 docs, one with the note, one a file with the filename of the note.