Unable to complete Bonjour sync between iPad and iPhone

I am using ‘DevonThink to go’ 3.04 on my iPad, and I set the iPad up as a server since I want to transfer a database to my iPhone.
(on the iPad: 1. I enabled incoming connections, 2. I specified a password, 3. ‘Devonthink to go’ assigned a port number)

I was able to set up the sync location on my iPhone but when I started the sync process, only the database showed up on my iPhone, but no file or group was downloaded.

Still, no files or groups appear in the database on the phone.

Any idea what am I doing wrong?

What do you mean here?

I enabled the incoming connections to allow my iPhone to connect to the iPad, I specified a password, and I left the port number textbox blank to let the app specify the adequate port number.

only the database showed up on my iPhone

Yes, the database showed up on my iPhone.
No, it is not the global inbox.

Did you flip the switch to import the database to the iPhone?

I’ve never used an iPad in the mode of “accepting incoming” for Bonjour; but, routinely use Bonjour with my iMac providing this role. But I’ll pass on a few suggestions.

Yes, I did.
I found that switch inside the location configuration in the iPhone app

On That screen where I flipped the switch to enable the database sync on my iphone, the message next to the database name says:
‘Not yet synced.’

Yes, I noticed the most common setup is to set a mac as the server.

I did all you are suggesting. However, after starting the sync process, only the database showed up on my iPhone, but with zero items in it.

And … consider just removing the sync location on iPhone and trying it all again.

Edit: Also reboot all devices (incase a flakey WiFi or other is interferring).

Here are the screen shots 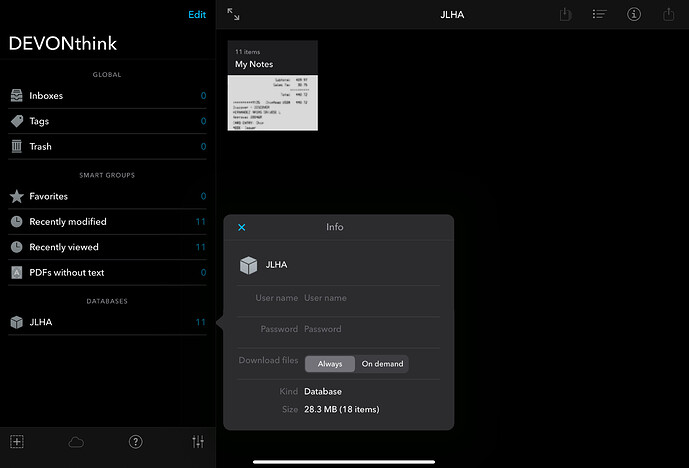 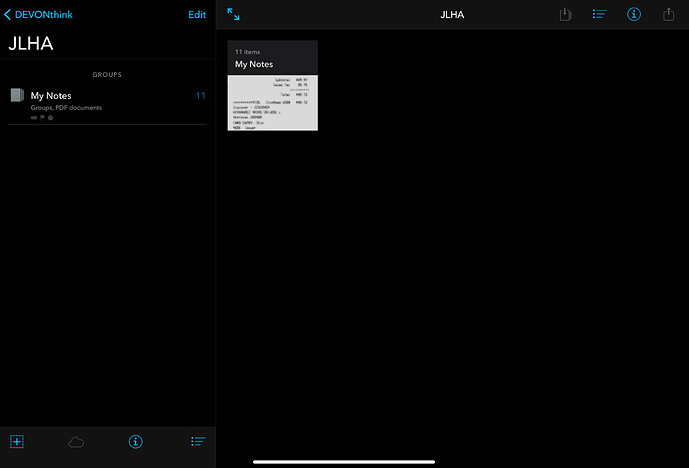 I have already deleted the location on the iPhone several times.
I even created a new database on the iPad with one file in it and tried syncing it to the iPhone, but I get the same result. The database shows up in the iPhone, but no files are in it.

Finally, finally: are both the iPad and iPhone turned on and active? DEVONthink not in the background on either device while the sync is being performed?

Yes, both applications are active.

I noticed that if the iPad’s app is not active, the iPhone location can’t connect.

Yes, both apps have to be active to work the sync (as they communicate and they don’t communicate in background, AFAIK). I’m out of ideas. DEVONthink support @BLUEFROG will surely pick this up.

Thank you, I appreciate all your suggestions.

In DEVONthink To Go, select Help > Contact Us to start a Support Ticket. Thanks!

I just started the support ticket. Thank you.

I just did. Thank you