Wanted Features for the Final Release of Devonthink3

Still looking for the ability to reduce thumbnail size in View as List/Widescreen/Thumbnails when viewing as a single column.

I noticed somewhere (in another view) that there was a slider bar to reduce image size - can it be replicated for thumbnails?

Maybe (indeed, quite likely) I’m missing something, but database-specific default views. So, database one always has the annotations pane in the inspector when first clicking into it, database two always opens with the general info inspector pane active, etc.

Still looking for the ability to reduce thumbnail size in View as List/Widescreen/Thumbnails when viewing as a single column.

Just installed beta4. Thanks for changing the inspector behaviour when performing a search to auto-close when auto-opened!

Also, the ability to re-order tabs would be really good.

Customise Due Date. Format options to include yyyy-mm-dd. Same customisation for created added and modification dates. I prefix entries with yyyy-mm-dd and would like the consistency throughout.

User Default setting for Due Date. For example, I’d like to be able to set it at Once and know that each new entry would default to that, rather than have to manually select.

“1. As moving items from inboxes to relevant groups is a common task please provide a toolbar “Move” item.”

I do that by simply dragging and dropping the item(s).

As moving items from inboxes to relevant groups is a common task please provide a toolbar “Move” item.

The “Actions” item in the toolbar includes access to “Move To” 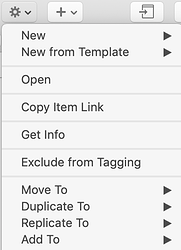 Bring back tabbed navigation of groups.

[I realize some of these requests probably fall later than the final release of DT3 version 1.]

This has been discussed some (though I don’t think “tabs within the inspector” would be good, though I have no mockup to go on). However, the question of implementation would come up.

Bear in mind, this is just discussion and in no way implies we are hard at work on this concept.

I find it quite odd that right-clicking on the navigation sidebar gives “New Database” as the first menu choice and “new encrypted database” as second menu choice–both are, in my experience at least, much rarer than wanting to create a new group/smart group.

Highlighting of the Table of Contents’ menu item under which the pdf page being viewed is. PDF Expert shows it, and it makes it much better for browsing and reading long pdfs, such as edited books.

Highlighting of the Table of Contents’ menu item under which the page being viewed is.

I realise now that it is already a feature of DT 3, but it is buggy: it doesn’t work properly when pdf pages have been bookmarked -presumably in PDF Expert. Whatever the pdf page being viewed, DT 3 beta6 highlights a menu item named My Bookmarks placed at the beginning of the TOC.

I would have liked to see the functionality provided years ago by the script Annotation Pane and, recently, Stack integrated into core DT.

DT3 Inspectors > Document > Annotations shows highlights and notes to highlights as links to the PDF pages. This welcomed feature still leaves that information within each pdf, unreachable as a whole in a DT database-wide search.

Another new feature in DT3, Inspectors > Annotations is also welcomed. But it doesn’t address the functionality provided by the above scripts because, if used for long pdfs, it would drive away from the concept of chunking for the storing and searching information. Although this DT3’s new feature is good for adding a short annotation about another short annotation, to store a long annotation about (let’s say, a book in pdf format) would be counter-productive.

In summary, most of my input of text into DT is done for pdfs via the one of the above scripts. I am very grateful to their developers for their effort, skill and generosity. But third-party scripts are not a future-proof way to store information that will remain consistently linked and accessible in the future. I long to see their functionality integrated into DT3 core.

How to better integrate their crucial functionality is another matter. I can think of notes in Inspectors > Document > Annotations > Details (that is, notes embedded in each pdf) being reproduced as separated markdown files, along with some metadata from the annotated file. But there might be more satisfactory implementations.

I realise now that it is already a feature of DT 3, but it is buggy: it doesn’t work properly when pdf pages have been bookmarked -presumably in PDF Expert. Whatever the pdf page being viewed, DT 3 beta6 highlights a menu item named My Bookmarks placed at the beginning of the TOC.

Could you send such a doc to cgrunenberg - at - devon-technologies.com? Thanks.

Could you send such a doc

Thank your for your attention to this issue. Sent to development at DT.

Any chance of adding a rating icon to the toolbar? As exists for Labels? Possible to add ratings via inspector or the “info” icon, but would be great to be able to skip a step.

It’s definitely possible, but Development would have to assess this as it wouldn’t merely be a button, but a popup button.