I installed one copy on my mac mini and setup encrypted sync to my synology NAS using WebDav. All works great. Pretty blown away by the program and really regret not having started using it earlier.

Now to my problem:
I can for the sake of it not figure out how to sync to a second installation of Devonthink 3 that is installed on my macbook. I installed Devonthink on the macbook and entered the license key, after that I went to Preferences → Sync and was trying to add the WebDav Sync I setup on the macmini.

First i used the path that was setup on the mac mini and it gave me a conflict, after that I researched a bit and saw somewhere i have to use the complete path to the .dtCloud directory, did that and it still gives an error (409).

How do I share a database between two copies of Devonthink 3 installed on two different devices? I started with iCloud, did not work that is why I went to WebDav… but somehow can not figure it out.

Thank you for your help!

Hello, Just purchased the DT3. I want to have all my databases (personal, business, work) in my iCloud sync. What is the best way to have a Family database that I can share and colloborate with my wife? Do I use a Dropbox database and login on her phones as well? Is there a better way? Now I am second guessing my decision to converting from Evernote to DT3…Thank you…

But somehow nothing works.

Do i have to use the same WebDav login credentials or is it enough to have access to the location?

Do i have to use the same WebDav login credentials

If you want to sync the same databases, then yes. Of course. There is, btw, a longish forum post here on how to set up WebDAV Sync with a Synology NAS.

What I meant was do I need to use the exact same credentials. I have multiple NAS Users that can access WebDav same location.

I will search and see if I can find that post about Synolgy. Screenshota will follow in a few minutes.

You can use any WebDAV user that has permissions to access the location where the sync store is located. 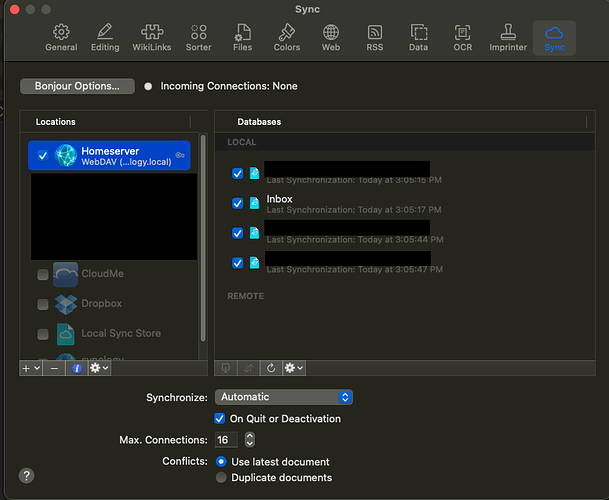 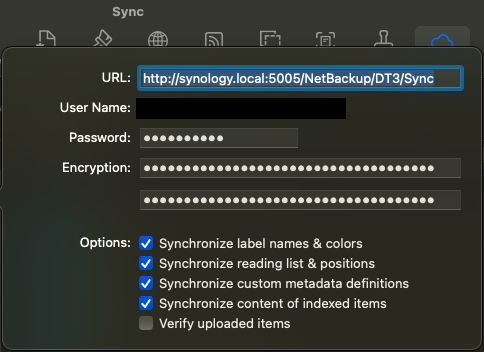 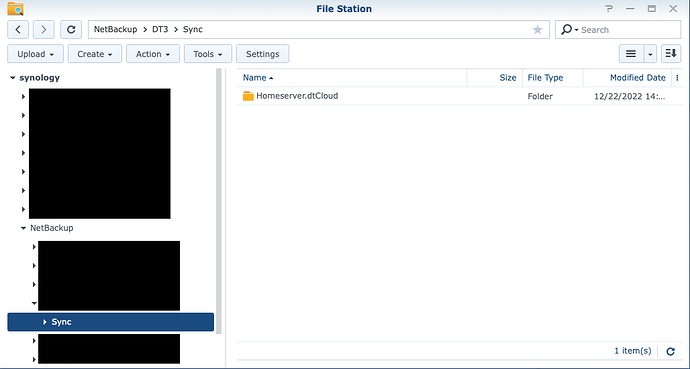 The DT3 Installation on the Macbook is basically virgin, no database setup, nothing else done.

I will have to take screenshots of that later, including the error, if that helps.

Thank you! That is what I meant. It seems it can access the location, but somehow can not open the sync store.

Are you actually using unencrypted transport on port 5005 instead of https:// on 5006 (typically) ?

I can also use the other one but I am just using the WebDav on my synology on my internal Lan not externally. Does it make a difference then?

For external services I use https with letsencrypt certificate and a domain that I reverse proxy with nginx. This however is only accessible from within my home network.

It shouldn’t make a difference. It’s just that you don’t see http:// as much nowadays.

Hold the Option key and choose Help > Report bug to start a support ticket and we can look at the logs.

Just real quick before I do that, what would I specify on the Macbook?

Or how do I add the syncstore / databases to the macbook?

I guess this is where my problem starts… 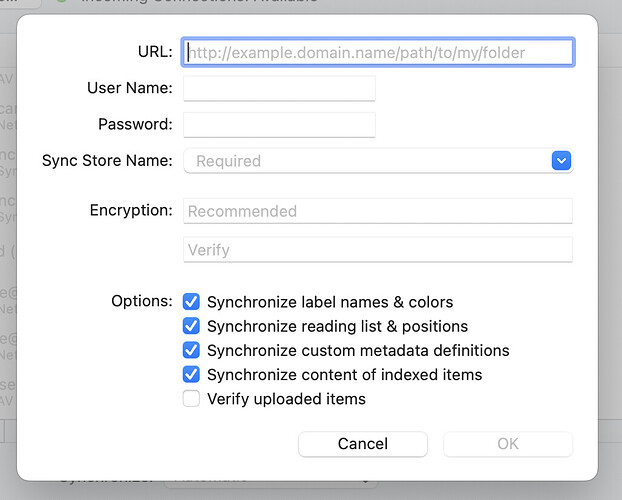 You’re not adding the sync store to the Mac. It exists on the NAS, synced via WebDAV in this case.

Why would you enter a different one?

True, just confused at the moment I guess

Let me try this, will report back later.

Guess that is where I got off trail the last time…

No problem. At your leisure and convenience.

I think i got confused thought I had to enter everything myself. Once I entered the URL+WebDAV credentials and then (this is where I went wrong) waited and chose the syncstore from the dropdown, it all started working.

My mistake:
I entered the syncstore manually previously not chosing it from the dropdown and since I chose the same name I think I ended up with some sort of conflict.