I switched from Evernote/OneNote to DevonTHINK a few months ago, and for the most part it has been a big improvement, but there is one major area holding it back: while handling of PDFs, etc is fantastic, the note taking functionality is extremely basic and frustrating to use - especially on DevonTHINK to Go. Evernote/OneNote are free, yet their note-taking and formatting options are far more advanced and easy to use than DevonTHINK’s (a paid programme).

While DevonTHINK does have a good number of formatting options, many of them are not available in the formatting bar, which necessitates going to the menu (which is much slower). This is especially true of Styles, which are a vital feature. In programmes like Microsoft Word and Scrivener, styles can be accessed in the formatting bar, which allows for quick switching between styles. In DevonTHINK, it takes quite a few clicks to navigate the menus to change styles at the moment, which can slow down the workflow quite a bit.

The iOS version of DevonTHINK compounds these issues with its buggy interface. This includes:

Fixing these issues would help my workflow enormously. At the moment, I am relying on OneNote for taking notes and then transferring them to DevonTHINK on my Mac.

DEVONthink To Go is not a be-all-to-end-all-do-everything tool. I hope it never does as it surely would get bloated and probably too expensive.

Why not keep doing as you are doing. Or look at a well-respected app “Drafts” (which I don’t use) but has connections to DEVONthink To Go.

The next major release of DEVONthink To Go will be focused on a better text editing experience.

PS: No dark mode is not a bug.

PPS: Some support for dark mode is coming.

yes, this was (is) one of my major issues I have by using DT (coming from Evernote) - while I love it on my Mac, it’s not so much fun while I’m on the road using DT2Go. My behaviour has been changed, I’m using more & more my laptop but not my iPad - “forced” by DEVONthink

Regarding notes, well, if I do handwritten notes ‘Notability’ is my choice - it’s a great solution, reliable and very good text recognition. I export PDF to DT after finishing a note.

If I do text notes, e. g. meeting minutes or project descriptions etc., I’ve started using Markdown - but, I don’t like it, I’m a writer, not a programmer. Currently I’m using RTF on my Mac (my major platform now), it’s easy, WYSIWYG approach, and it’s pretty good readable on iOS - you can even add text without loosing formatting there; unfortunately there are no/less formatting options available, but, it is like it is.

If we would see a better RTF support on iOS then this would be my prefered and final solution.

And, last but not least, if I need a more complex document then I’m using Numbers, Pages, Keynote - and then I’m happy with DT2Go because I can work with those files directly from Files.app. Looking forward to have a “open in…” (without copy) feature in DT2Go to make it even easier.

is “open in…” instead of only copying a file to a thirdparty app a feature that you are considering for the next major DTTG release, @BLUEFROG - this would really really be helpful.

You don’t need to copy a file to a third-party application if it supports the Document Provider mechanism. For example, in Excel… 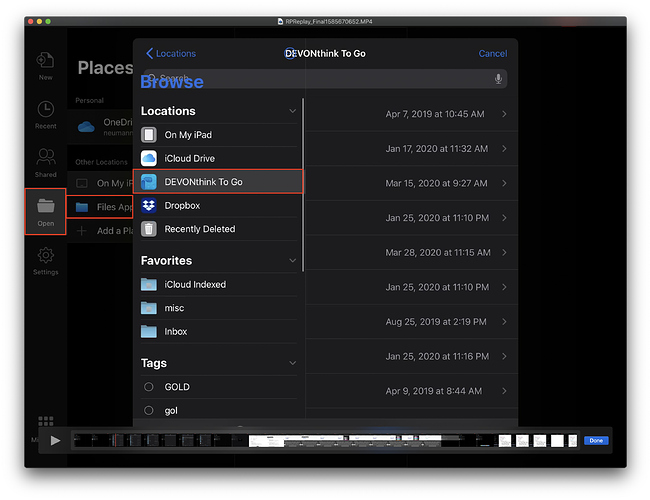 You don’t need to copy a file to a third-party application if it supports the Document Provider mechanism. For example, in Excel…

Jim, you know that the challenge with that is that the user wants to open the document in the supported app (Excel) without having to switch to the supported app, then hopefully successfully navigate to the document in DEVONthink to Go, and open it from there. It’s a pain to do this as-is. Anyone that doubts that it is is just not actually trying to do work in DEVONthink to Go.

As a comparison, try this for a week in DEVONthink for macOS where you have a database of indexed documents and you are forced to switch to Word, Excel, or whatever and locate the document in the indexed structure to open it. That’s what it feels like on iOS to open and work with documents using the Document Provider.

This pretty much hits the nail on the head at highlighting the friction involved. I’ve been “actually trying to do work in DEVONthink to Go” for a long time now and it’s just painful for the exact reason Greg mentions there.

I’ve seen lots of suggestions that you can open DTTG files from within other apps via the integrated Files browser, and/or that you can “Open in…” from within Apple’s Files app itself (only). Both come at it from the wrong way around. It doesn’t make sense to approach opening a file that way. And it’s a perfect suggestion to try and do that on macOS version for a week to get the point across. (The macOS version of DT is sublime btw, just so you know I’m not all out grumbling here.)

I’ve tried just about everything to make DTTG more workable. Another pathway mentioned is that some apps (e.g. iA Writer, 1Writer), can map folders to some 3rd party app folders and iCloud Drive folders. That would be a step forward if DTTG supported it. I’ve even tried some crazy workarounds involving embedded javascript editors, tiddlywiki-like self-saving and x-callbacks. (Note: my productivity dropped off those days

I’m desperately awaiting the next major update of DTTG to plug the small but significant gaps in DTTG features (and therefore workable workflows).

Again, to offset the grumbles… let me just say… DTTG does a fantastic job at capturing “Share to” and quick notes and clips from all over iOS. For that, I’ve actually found nothing better for capturing all kinds of information (yes, Drafts is good at text composition/capture but not much use for capturing photos, audio recordings, bookmarks etc). It’s a great little mobile Inbox. And at a pinch… I can usually find my way to the information synced there, if I have a suitably patient situation to do that (often not the case when I’m mobile though).

I’ve always understood the idea that DTTG is a companion app and not something to think of in parity to the macOS super engine. I get that. But with Apple really starting to push the idea of iOS as a first-class citizen in the OS world (yeah, ok, I’m not convinced either) but still… iOS has evolved and is evolving… that next update … nghhhhhh I really need it

Go on Bluefrog… give us a date or ETA. I dare you

Dear Jim, thank you very much. I know that what you are explaining is possible and I have already purchased the pro version. However, if I want to be productive, it would be much better to open a file from DTTG in a third party app (editor etc) from within DTTG instead of having to switch to the third party app and searching there for the file. As far as I know iOS supports this “open in (third party app)” and therefore my question was, if Devontech is considering to implement such a feature in the next big update?! It would be really welcome from my side.

This is a feature wish/suggestion, and not a criticism at all.

Nothing to add to the above.
If you finally decide to create a formatted document in DTTG and use it to take notes despite the poor quality, then every time the system save the data base, it creates a copy of the note you are working on, which force you to clean-up the group at the end. I understand Devon Technologies is a small company but do not understand with the time necessary for a major release; last DT3 (beta) was in march 2019 and minor DTTG update some time now!

I’d like to add my voice to this - I’m deep into trialling DT and have been trawling these very useful forums to ascertain the details of the two programs (DT & DTTG), but now realising that you cannot ‘open in place’ in DTTG and that the text editor really is quite poor, this really scuppers one of the main reasons for using DTTG as you are just not going to be benefitting from one its main features (search) - as the others have said, how awful would this workflow be on the DT on the Mac?
And although I understand that DTTG has been seen as a companion app, I think it should be very clear from where the iPad is now at that iOS is now a mainstream “PC” OS and is likely to become ever more so…guess I’ll have to hold out until DTTG gets these few crucial things right.

It is (and has been) “allright” on the Mac for years …DTTG is a welcome addition to the party.

DevonTHINK for Mac is a superb programme; if you have a large database of PDFs or web clippings, it’s easily the best app I know of (I tried Evernote, Onenote, and Notion at length). I have a massive research database, and there’s no other app that handles PDFs with the same efficiency. My aim was to use DevonTHINK to Go as a notetaking/writing app that syncs with DevonTHINK for Mac, and currently it doesn’t really work due to the buggy text editor - though I have been informed that the next update will focus on improved notetaking, so hopefully I’ll be able to stop using OneNote and rely purely on DevonTHINK for notes once that happens.

The next major update actually.

I know it’s been a crazy year, so not complaining, but is DTTG moving forward? Last update was 8 months ago.

is DTTG moving forward? Last update was 8 months ago.

Waiting as well and losing patience…

Remember we are a small development house and the computer world isn’t standing still around us. Apple’s pace with updates (and the sad loss of quality control) creates a situation where they hypnotize people with new features that our apps "must have" and we have to weigh out what can be accomplished and what has to wait. So of course, as they saying goes, “You can never make everyone happy”.

Also, the focus of technology on iOS is not the same as the Mac, so things like a solid, robust rich text framework are not full of possibilities and require more development and investigation than other things.

But yes, DEVONthink To Go is still in active development.

Thanks. I totally understand the delays. Am eager to see improvements to DTTG because I enjoy it and use it so much. Thanks.

You’re welcome and thank you for the kind comments! I know @eboehnisch will appreciate hearing that.

DTTG has made DEVONthink on my Mac so much more useful, as I know that everything I put there is accessible in my pocket later. DTTG is mostly used by me for reference right now. But any further editing improvements, and other interface improvements will be welcome. I would gladly pay for a much improved version.