Can't get sync to work

Unfortunately DT doesn’t even accept keyboard inputs on the file name, so I use “ohne Titel” as predefined.

As an aside, I have just tested that - DT happily accepts key strokes in that window here. It might be worth restarting your Mac.

I remember from DT2 times that sync was displayed in the activities and that it also showed a progress bar while closing DT after work was done.
Nothing like this happens.
Files → Sync is also without success.

So you use a “local sync” folder on a NAS where the parent directory is presumably mounted via SMB? Since it’s a Synology, why not use WebDAV? There’s a lengthy description on how to set that up here in the forum.

Or use Bonjour sync which is a lot simpler than setting up WebDAV – why do you even need the NAS for syncing in your setup?

As Jim suggested, please check the log to see whether there are any entries. If you had correctly set up CloudKit sync as well, and that wasn’t working either, it could suggest that both your databases have an error which is precluding sync*. Such an error would show up if you run File > Verify & Repair Database in DT.

So I restarted the machine and arranged the syncstore again. I was able to type the name now.
Still nothing happened.
Then I was running a repair and it came back with 41 errors. BUT at the same time it started the sync. Now I can finally see its doing progress.

So what was my mistake ? Not restarting the machine often enough like a windows pc ?

I don’t know; Jim will tell you that he suggests restarting your Mac routinely (got to type fast, he’s writing already) …

Again, Window > Log is the place you should alwyas start if you think there’s a sync issue.

And one more time for good measure… Sync is ​not ​a backup, neither advertised nor advocated as such. We strongly advocate proper primary backups using TimeMachine (or similar snapshot-style backup applications) and external drives. Also, you should read the series of articles we posted: DEVONtechnologies | Search & Find

…but I don’t (on most other counts I do listen to Jim). At the same time, the sync mechanism is designed to stop when errors are present in the database. So either/or may have been the cause.

I wrote earlier: I use Time Machine as a backup as recommended.
Due to some history with time machine backups, especially when you need them restored, I feel better to have another source of data on a NAS that can be backed up with NAS technologies.

Sync is not a backup. Yes, I agree.

Back to the topic of software being quiet after an initiated process doesn’t start: Instead of blaming the user not reading the manual, how about a proper prompt or feedback that the process can’t be started because of reason XY. Instead the user is left in the wild the whole app is doing nothing.

Sync is not a backup. RTFM !

Instead the user is left in the wild the whole app is doing nothing.

@createch2 personally, I would have appreciated a thank you for the support users offered you here. You are quite within your rights to complain or voice your opinion. But if that is all you do, you’ll leave a bitter taste. That too, of course, is your prerogative.

Your are right. Thank you. Most of your hints were helpful in the process to get it done.

I feel better to have another source of data on a NAS that can be backed up with NAS technologies.

Then why not simply backup to the NAS, too?

You know what? If a UI states:
“not yet synchronised - upload database” what would the meaning behind that? Its completely misleading. This is what gave me to idea to upload a copy of the database first.

BTW, the log was NOT stating that the sync can’t be executed because of DB errors.

Ideally using backup software which provides for incremental, versioned backups, such as Carbon Copy Cloner, I would have thought.

Your are right. Thank you.

Most of your hints were helpful in the process to get it done.

As tech support isn’t exactly my main occupation, I’ll settle for most of my hints being useful. I’m going to go out on a limb here and dissect the posts in this thread a little. You are welcome to ignore what I write, or to point out that it is not my business to be suggesting to another person how they should go about daily tasks. Your first thread provided me with no insight whatsoever as to what you had already done, and where the point of failure was. You asked for the correct procedure to set things up; pointing you toward the handbook seems to me to be a reasonable response to that. It might have been helpful for you to provide screenshots of where you were in your first post, or a description of what you had already done (you actually had already followed the correct procedure to set things up at this point; you may have known that, but I couldn’t). The aim of that first post would be to make sure we all have the same knowledge base. It wasn’t until your 6th post that it became apparent you had actually followed the standard procedure for setting up sync; you’ll note that following your next post it became reasonably easy to bug-fix. I note that some of the answers in the thread bugged you - partly, I think, because they suggested you do things you already had (but the posters couldn’t know that) and - I’m guessing here - English is neither the posters nor your own mother tongue. That can make some posts here seem harsher than I think they are meant.

Anyway, what I’m saying is that I suggest when asking for help, try to initially bring those helping up to speed - show what you have already done, where you are at. That makes it easier to guess whether “read the handbook” is the right response, or “you’re going to need a script for that”, or whatever. Please don’t take this feedback as “holier-than-thou”; you came to the forum for help and found the experience frustrating, I think. That’s not the aim of the game, and my suggestions are aimed solely at improving the experience next time round. Feel free to criticise both the software any myself - but please do it in a constructive manner, suggesting specific improvements rather than generically stating that things are not good.

Are things working for you now? Did sync successfully finish?

You know what? If a UI states:
“not yet synchronised - upload database” what would the meaning behind that?

That is why I suggested an improvement to Jim; I agree that as the user cannot upload the database, the term “upload database” is not helpful. In fact, I’m on record having pointed that out some while ago.

BTW, the log was NOT stating that the sync can’t be executed because of DB errors.

Thank you - that is most helpful feedback; @BLUEFROG @cgrunenberg in addition to my suggestion

please could a log entry be generated (as I think it is when the database is already set up and cannot be synced) for failure on initial sync?

please could a log entry be generated (as I think it is when the database is already set up and cannot be synced) for failure on initial sync?

Actually issues should be already logged to Windows > Log if a database can’t be synchronized, no matter whether it’s the first sync or not. And by default this window is automatically opened.

That’s not true.
My Log file currently just spits an error on the neighbor database “Eingang” that has nothing to do with the working database. Even if I start a repair on the claimed database “Eingang” it continues to state “database check failed, please repair” for this single database. Not indicating a repair attempt or whatever. The activities window remains empty completely.
So pointing out the log is leading/helping you in case of malfunction or difficulties is rather an excuse than a helpful procedure. 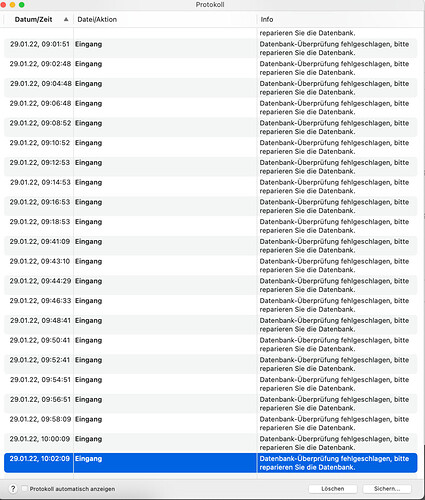