Drafts 5 export to DevonThink with tags?

Using Drafts 5 as my on-the-go note taking app is fantastic. It’s much more robust and less fussy than DevonThink To Go. Exporting a note at the end of a meeting requires two taps.

However… DT does not import tags from Drafts. This means having to open DT and do more on the note to properly tag it.

I saw an old post about using a script to to import tags from Drafts 4, but that’s clunky.

This one here should work with tags:

I also found this one: actions.getdrafts.com/a/1F8

Thanks for the push in the right direction.

This is exactly what I needed, thank you @BurningChrome and @robobo1. It didn’t work on the desktop so I adjusted it. You can follow it here - 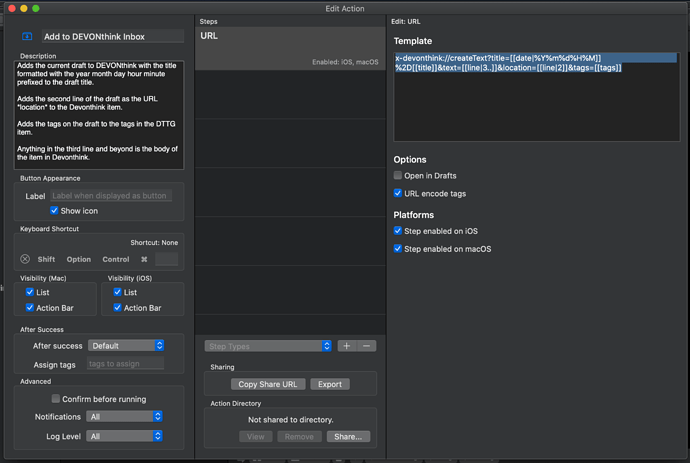 This is a very small adjustment to @joshsullivan 's action at https://actions.getdrafts.com/a/1F8 It makes it work with Devonthink DTP3 as well as DTTG by removing callback-url - ...

Is there a similar solution for the Mac?

This is not working in Drafts on macOS for me.

For me it is not working either…

The latest version Drafts supports actions I believe, so it may be possible soon.

It seems that DevonThink 3 for mac does not support x-callback-url BUT it does support “URL commands”. To make this action works on macOS just remove the x-callback-url/ part.

For more information search for “URL commands” in DevonThink help inside the app.

Correct and thanks or the pointer to the documentation.

The distinction if noted in the Help regarding URL commands (i.e., the URL scheme)…

Hi, all. Can anyone describe how to modify Drafts’ built-in “Make Note in Devonthink” action so that it also imports tags?

Never mind! I didn’t realize it was already doing this.

I’m curious why you don’t just make the note in DEVONthink To Go from the beginning.

Drafts has some features for note-taking that DTTG does not. It’s very fast to get to typing from starting the app, there’s really no delay. It also has an “auto note” feature that easily starts a new note for you. I like the way it displays markdown natively. And the sync is not fussy at all — it works quickly and smoothly across all of my devices, I never have to futz with it. I love that notes sync seemingly as soon as I start typing.

Drafts is purpose-built and nails the experience.

It’s very fast to get to typing from starting the app, there’s really no delay. It also has an “auto note” feature that easily starts a new note for you.

What’s the delay in creating a note in DEVONthink To Go?

What’s the delay in creating a note in DEVONthink To Go?

Drafts: one tap on the icon, Drafts opens immediately to a new, empty note.
DTTG: tap on the icon, FaceID (sure, I could leave out this step, but in my case DTTG and Drafts have different contents with different security requirements), DTTG opens to wherever I last was, tap back to Global Inbox, tap on +, select note type.

Drafts is an amazingly streamlined way to take notes. Nothing else, but that one thing it does really well for me. As posted by @unclecrabby in a previous thread:

I use Drafts on Mac and iPhone as a dumping ground and selectively move notes or copy text from there into DTP.

It (Drafts) is full of junk too, of course, but that’s fine because that’s how I use it. DTP is curated, containing my meaningful things.

I also agree with this sentiment:

And the sync is not fussy at all

Data protection requirements mean that I sync a number of DT/DTTG database via Bonjour only. The contents of my Drafts don’t have that requirement, so sync seamlessly via the cloud.

To me none of that reflects negatively on DT/DTTG. Drafts is that pile of paper I used to have with little notes scribbled all over - just much better. DT is my enormous shiny filing cabinet, the pride and joy of my office - just much better.

Accepted, and I wasn’t aware. It remains less immediate that Drafts, however. I mean, honestly, we are talking a second or two - but the Drafts experience of note taking kind of pings with me in a way that DTTG note taking doesn’t. But neither did Notes, and that’s even more difficult to explain objectively. The other points I made remain valid of course. There is a noticeable dose of personal preference here, and I must admit I was sceptical of Drafts and what I was going to be paying for it. But somehow. Anyway, not to worry, if I could only have the one or the other, it’d be DT all day long

Drafts: one tap on the icon, Drafts opens immediately to a new, empty note.
DTTG: tap on the icon, FaceID (sure, I could leave out this step, but in my case DTTG and Drafts have different contents with different security requirements), DTTG opens to wherever I last was, tap back to Global Inbox, tap on +, select note type.

And Sync is more automatic/bulletproof/reliable with Drafts. Drafts sync “just works.” With DTTG even with a think sync, it seems it always has to sync when I start the app and it can take quite some time.

I kind of liked drafts until I stumbled upon the fact that it imprisons my data. Or, to put it less dramatically: it stores everything in its own data structure away from finder and the file system.
Which doesn’t sit well with me because I need my data in different apps, sometimes even in Emacs (shudder).
That might explain why the sync “just works”.