I have now seen two reports, one by a Onedrive user here and one by a Dropbox user here. In both reports their entire Dropbox/Onedrive folder was moved to a new location ~/Library/CloudStorage/Dropbox (or Onedrive).
This happened automatically and as far as I can tell included their local and their cloud only files.

This seems to be related to this article although neither user mentioned 12.3.

I think this DEVONtech thread is about the same subject.

My concern is that it apparently is affecting local Dropbox and Onedrive folders, not just cloud-only. My local Dropbox folders are indexed in DT3 and I assume there would be a problem if the location changed as in the two reports above.

I posted about the changes to OneDrive recently, and share your assessment; there is an example of a user probably experiencing the effects linked from that thread.

I wasn’t aware until now that Dropbox was also changing its folder location, so thanks for that link; again, I agree this is likely to cause trouble. I see the potential for data loss when the change is implemented. Specifically, I see a problem if the location is changed on one Mac, but not (immediately) on the other. Whether or not that happens may or may not be something the user has influence over. As I explained here that mechanism certainly has the potential to cause data loss.

I think this DEVONtech thread is about the same subject.

That thread is on the subject of sync rather than indexing; Criss explains in that thread that sync should not be affected.

I am not seeing any move or suggestion from the Dropbox app for the local repo.

All that Dropbox seems to have publicly said is this.

Whereas Microsoft have said this.

I am sure they are both driven by the same macOS 12.3 changes, so it would surprising if they weren’t both affected similarly.

The (rather incoherent) Dropbox thread specifically mentions the ~/Library/iCloudStorage/xxxxx location mentioned in the Microsoft document and by the Onedrive user.

In the second link posted by the OP, a user notes:

After moving to this beta build on my Intel Mac (waiting to update on my Apple silicon M1), the ~/Dropbox folder is now gone. Good to see that Dropbox appears to be using more of Apple’s file provider work, and Dropbox does show up in the Finder sidebar. It appears the actual files are now in ~/Library/CloudStorage/Dropbox.

Haven’t seen it here yet…

The post I referenced refers, I believe, to a beta version of the Dropbox client. Whether or not that change will be adapted in the production version I can’t tell you. Based on the impending changes in macOS and the changes we are expecting in OneDrive there would seem to be a realistic probability at least, though.

Yesterday I got updated to macOS 12.2 and my OneDrive installation was moved into Library, with a link in my home folder into that internal Library folder.

I have not only verified those changes but suffered them, as now firs access to a folder dramatically decreases speed, as the new improved technology deals in a socket to communicate between the cloud server (OneDrive in my case) and the simulated file system. New way must be implemented by Dropbox as well because the current kernel drivers used by cloud stuff won’t work in 12.3 version (*) anymore.

Basically, OneDrive (and GDrive and Dropbox in a near future) are some kind of network drives connected via Socket to the program that does the job. They appear in Locations in Finder, as any other networked drive.

Said that, I only have one indexed folder in OneDrive and nothing has changed. No corruption, no files duplication, nothing strange. All is working as expected both in my iMac and in my MacBook Pro M1 and MacBook Pro Intel. Still need to update my MacBook Air M1, then mixed configuration old/new stuff should work.

Having the sync database in Dropbox is a different thing, I’m talking here about indexed files.

However, this is my situation. Don’t base your decision in my comments. As I use to say, “works for me” does not means it works, it only means “works for me”.

(*) I’m pretty sure this is another dirty movement from Apple to force us users to move into iCloud Drive and forget other clouds, as it seems iCloud Drive will continue using old kernel drivers. “Do what I say but don’t what I do”.

Excellent, thank you for some real-world feedback.

Where is the path of the indexed files in DEVONthink point to? I’m kind of assuming it’s still points to the previous OneDrive folder in the user directory rather than magically having changed to point to a directory in the library?

Is ~/OneDrive actually still a folder or an alias to ~/Library/CloudStorage/OneDrive? Over here it’s an alias.

Sorry, it is an alias to the internal Library folder: 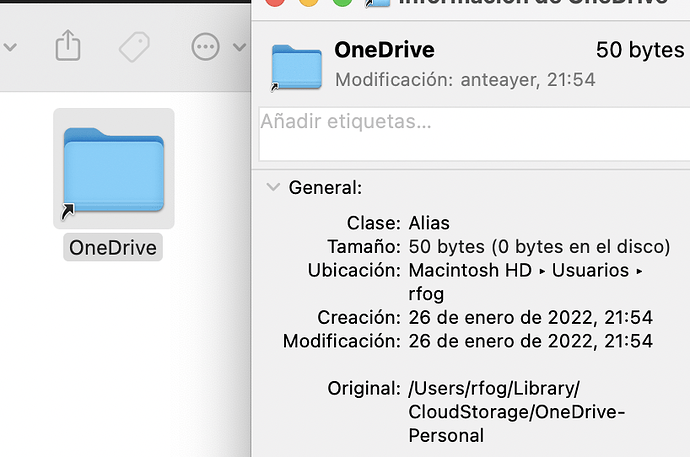 BTW, I’ve just updated my MacBook Air M1, and OneDrive has remained classic version after a crash and it is updating content now one more time.

it is an alias to the internal Library folder:

And the name of the internal folder might even vary depending on the language, e.g. over here it’s OneDrive-Persönlich

That’s only going to be reliable if all use the same macOS version and language.

Pffffff (spitting coffee over the screen).

Will they learn? What happens if you change the language in your Mac? In Spanish and English the word is the same, Personal… I cannot test.

Al seems to be explained here: 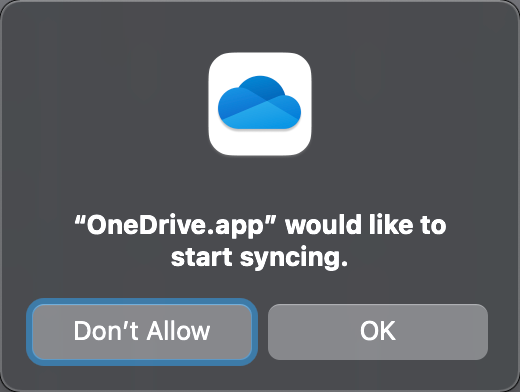 Inside the new Files On-Demand Experience on macOS

In June 2021, we announced several important updates for OneDrive on macOS, including an update to our Files On-Demand experience. This new experience is better integrated with macOS and will also help enable new features like Known Folder Move for...

Al seems to be explained here:

At least the comments are not that overwhelming

I only tested it for some time using few files/folders and this new experience is definitely a pain in the rear end.

The good news is that the support for indexed items which were replaced by aliases or symbolic links like in this case has been improved for the next release. And DEVONthink’s own synchronization won’t delete files/folders located in cloud folders anymore, that’s now completely up to the cloud service/client to avoid race conditions.

So can I confirm that the local full size files are all moved to the normally invisible ~/Library/iCloudStorage/OneDrive and an alias to this is placed in Finder sidebar under “Locations” …and DEVONthink carries on working for indexed files as before …or does DEVONthink need re-pointing at the new location to keep working?
Dropbox will do the same at some point.
Effectively the ~/Library/iCloudStorage/OneDrive is a local cache.
So backing up of the actual files with Time Machine etc will still happen but will take a bit more finding.

So can I confirm that the local full size files are all moved to the normally invisible ~/Library/iCloudStorage/OneDrive and an alias to this is placed in Finder sidebar under “Locations” …and DEVONthink carries on working for indexed files as before …or does DEVONthink need re-pointing at the new location to keep working?

There are issues with the current release and its handling of aliases. Therefore I would definitely recommend to update the path via the Info inspector. Ideally the path of the indexed files should be the same on all machines and the same versions of DEVONthink, macOS and OneDrive should be used. And of course pinning the files/folders is also recommended as indexing requires local copies.

Thanks. I don’t actually use OneDrive, but I do have a few thousand indexed files on Dropbox which I fully expect to experience the same changes, and want to be ready.

Here is a question: I really like the Power of DT3 and I index a Dropbox and Google Drive folder … For some of the things that need to stay in those places, how is Eagle Filer planning on handling this ? Maybe I consider switching to that for the DB and Google items; will these changes effect Eagle Filer as well ??

I plan on keeping the bulk of my stuff in DT3, if the update breaks dropbox, I will just import what I dont need to stay in dropbox