After switching to Dropbox for sync, I get this message popping up on all my computers which are on the same sync. It seems to be after a few hours, so maybe some kind of session is timing out? I assume it’s a Dropbox issue, but thought I’d ask here first. 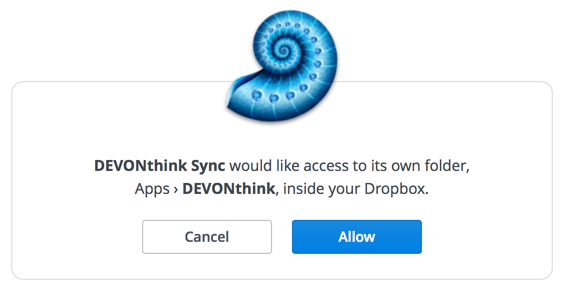 My Dropbox sync is via the company Dropbox account.

I also have my own Dropbox account, but that is not connected or used by DEVONthink sync. One computer has no Dropbox account installed, and gets the same message.

I’m not sure if the issue reported here is the same one, but it might be worth taking a look and potentially trying the solution suggested by Jim further down in the same thread. (The thread was initially about iCloud, but diverged to include Dropbox.)

I’ll try that and update how it goes.

Unfortunately Jim’s procedure did not work.

I will ask Dropbox support.

It’s a known issue of v3.8.5 which we’re currently investigating. One workaround is to downgrade to an older release.

Why is this showing DEVONthink 2.x’s icon?

Do you still have DEVONthink 2 installed on the machine?

But I’m getting the DT3 icon: 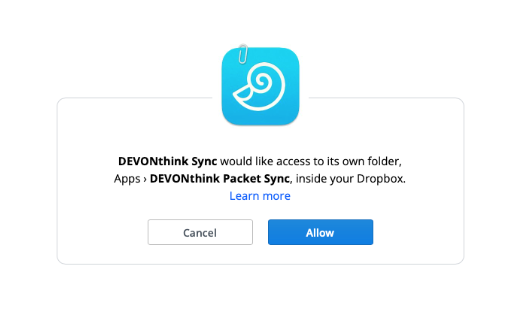 Thanks Christian, but I can deal with it for a while. I had thought it was something I did wrong when switching from CloudMe back to Dropbox.

And same as peter999, it works for a few hours but then reverts back to asking for permission on all devices.

No I don’t - I used to have some years back when I originally used Dropbox for sync, but currently no DV v2 on any computers anymore.

Christian, Is this likely to be resolved in the next update? And any rough indication when that might be?

I don’t want to push all our users to downgrade unless it will be months.

Christian, Is this likely to be resolved in the next update?

I am having the same issue. Have used dropbox for years to sync my databases. Installed devonthink on 2 new MacBooks airs and now have this issue. Getting a request for permission from dropbox. Running 3.8.5 on new computers and 3.8.3 on another where the issue is not happening. Devonthink will not sync automatically and requires one to go to preferences-sync and click on the sync store, manually request to sync and then give the permission in a web browser. It is almost as if the permission is not being remembered on the computer. I have checked my dropbox app list for permission and devonthink is on there. Thoughts? Is downgrading to 3.8.3 the answer? If so, how does one do that?

I can’t answer whether a downgrade would be an option. I’m expecting 3.8.5 to be made available reasonably soon, although I acknowledge DEVONtech won’t be providing a date. You could use Bonjour sync as a stopgap measure in the meantime; whilst that will only work across your local network, it’s easy to set up and fast.

If you do want to try downgrading, though, Criss posted a link to 3.8.3 in another thread.

Blanc- Thanks for the link!

The same problem happens w/ DTTG 3.5.4 – is there also a way to downgrade to the previous version of the mobile app?

is there also a way to downgrade to the previous version of the mobile app?

To the best of my knowledge no; DTTG is only made available via the AppStore which is a oneway street as far as versions are concerned.

(@cgrunenberg I wasn’t previously aware DTTG was also affected; you probably are aware, but just in case…)

Thanks again Blanc! I wasn’t sure if there was a way around the AppStore, but that makes sense. Yeah, both my iPhone and iPad. But at least both my MacBooks are now working fine w/ the downgrade – and I can wait for the next version of DTTG.

Yes, we are aware of this and no, there’s no mechanism to downgrade DEVONthink To Go.

It is not DTTG, it is Devonthink on the Mac that is having trouble

From cgrunenberg:
It’s a known issue of v3.8.5 which we’re currently investigating. One workaround is to downgrade to an older release

This issue is not happening on the one Mac we have running 3.8.3. Can you downgrade the Mac version of Devonthink back to 3.8.3. It’s not just an annoying message. The software will not automatically update the databases. Only way you can get it to update is to go to preferences, click sync and manually sync which brings up the dropbox permissions link. Once you say OK it will sync but an hour later, it will no longer