How do I get the direct URL of a document via the server web interface?

I would like to be able to reference documents directly via their URLs. When I right click on a link within the web interface it doesn’t give me the full url. Is there a way to get that via the web? The reason I am asking is that I want to e.g. embed a link within another application, and just be able to click and get straight to the document.

No, that’s not possible to do.
Also, why are you interacting with the web interface instead of DEVONthink itself?

My rationale is that I use a number of web based tools e.g. asana and I often want to link a task to a specific document, such that when I come to work on the task I can just click the link and get straight to the document.

What is the correct way to do this sort of integration between a web page and my DT documents?

DEVONthink isn’t a web-based tool, so I don’t think you’re going to get what you may be expecting.

Selecting an item in DEVONthink and choosing Edit > Copy Item Link would yield a link, but it’s DEVONthink’s URL scheme, i.e., it opens with DEVONthink.

Is the possibility to share as a hyperlink (http) and not item link available with DT Server?
andyburnett January 22, 2020, 11:28pm #5

Ah, that’s disappointing. I was hoping that the server would give me a url addressable system.

Hmm, I may have to write a web front end to the database.

Ok thanks for your help

Also, why are you interacting with the web interface instead of DEVONthink itself?

A web URL link would be very helpful for all the reasons that the web server exists. For example:

(1) If a member of my team accesses DT3 only via the web then it would be extremely helpful for me to be able to share a web URL with that person when discussing a particular document or a particular group.

(2) If I regularly access my DT3 database via web server when I am traveling, it would be very nice to have a URL which takes me directly to a particular Group that I frequently use rather than having to navigate there through the full database tree on the web.

Yes, those are great examples of how direct URL access could be really helpful.

Given that the server exists, I am surprised that it isn’t possible to have a direct link. I suppose I could extract the paths from the Quasar front end, but I was hoping there was an easier way.

The ways you are thinking of using the web interface are not the common ways it is typically used, so this is not currently available at this time.

Seems to me that is a circular argument - maybe more people would use those functions if they were available.

That’s not a circular argument. It’s a statement of fact based on the historic usage of the web sharing.

Additionally, "two users” interest is noted but that doesn’t make implementation trivial or rank it higher in priority. We could do also kinds of things that ”maybe someone would use”, but that’s not usually the wisest course to follow.

Including these two requests, I could probably gather less than 20 such requests I’ve had in the 7.5 years I’ve been with the company.

PS: I have had many ideas that could be seen the same way - ”Maybe more people would use them, if…”, that none of you have ever seen.

That’s not a circular argument. It’s a statement of fact based on the historic usage of the web sharing.

But you only released the feature with DT3! How much history can there be? (Ok, you had a web server previously but it was much less capable so not really a comparison.)

I agree that you have to judge what will be useful and what will not be useful to your customers as a whole. But I think it is too early to have a “historic” picture of how web sharing is used.

More importantly, I suspect the web server would be utilized much more if you were to add another feature that I suggested in the past - allow the user to adjust the view to add columns with custom metadata. Without that feature, the web server is seriously limited in capability since there can be very important information in the database which is entirely non-accessible via the web server.

Yes, the web server existed in DEVONthink 2 with the same basic functionality. The new features are per-database, per-user permissions, secure connection support, and new UI to complement DEVONthink 3. So the ”historic” picture is valid based on the core functionality that has and still exists in the web sharing.

And again, you are suspecting increased usage (and the “limited usefulness”) based on your own ideas and wants. But that’s not really quantifiable in any realistic way. Additionally, there is no ”increased usage” without a purchase of the more expensive Server edition. We can’t forecast an increase in Server licenses based on the addition or improvement of any feature. (If we could, we’d all be millionaires!)

I would like to be able to reference documents directly via their URLs. When I right click on a link within the web interface it doesn’t give me the full url. Is there a way to get that via the web?

You could switch to the simple search interface by appending /search to the server’s address. Afterwards search for the documents and copy their URL. However, this URL would be probably only valid in your network.

You could switch to the simple search interface by appending /search to the server’s address. Afterwards search for the documents and copy their URL. However, this URL would be probably only valid in your network.

Works for me even outside my network

Thank you! That looks like it will solve the problem for now.

As a design thought, it would still be nice to have the benefit of your - very nicely designed - web interface, and then be able to right click and get the same link as provided through the simple search interface.

Just something for the dev team to think about.

Thanks for the suggestion, I’ll forward this.

I’m not sure if it still works in DT3 server.
You can give it a try and please let me know.

Ah, I wondered about rewriting their x-callback protocol. That’s great. I will go and give it a try. Also, I wonder what the server returns if I Curl the address - lots to experiment with.

Thanks for the suggestion, I’ll forward this.

This ability to have a direct link to items is super - and I agree that getting these links via a right-click would be even better.

Taking this one step further - is it possible (or could it be possible) when setting up user permissions for the web server to set up Read privileges for a given database for “everyone” with no need to enter a username/password? This would be really helpful for sharing documents or groups which are not security sensitive in a way that the reader just needs to go to the link and does not need to even know that Devonthink is being used to host the item.

If you define a user named guest, you will see a Guest button on the login page… 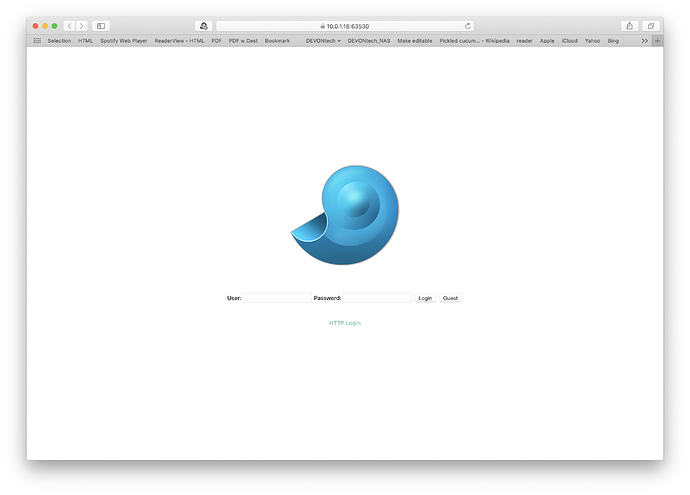 … though Development would have to assess if the different graphic is intended or not.