I’m moving away from using Eagle for video notes because there’s no linking nor an easy way to export the notes after you generate them and I stumbled on DEVONthink’s Insert Back Link in the Annotations and that it even does timestamps. This is nearly perfect!

What I really liked about Eagle is that I could hit the note hotkey and it would pause, pop up a note panel for me to write and then resume playback after I close the note UI. I’m trying to automate doing roughly the same thing in DEVONthink.

I don’t see a direct way to play and pause the video in DEVONthink’s dictionary but I’ve been able to get it to work with UI scripting, it’s brittle but I don’t change around my UI configurations much so other than needing to add an option for playback depending on whether it’s a document window or a viewer window that’s not the end of the world.

Since I can’t really dismiss the annotations panel I’ll just run it again to toggle playback. I generally avoid AppleScript unless I absolutely have to use it so forgive me if my inexperience with it is making this more complicated than it should be.

Here’s where I get stuck and I have a couple of questions.

Thanks for the help, I absolutely love DEVONthink and this is so close to the perfect tool I’ve been looking for to do video annotations. I am also looking at external video players that let me get the current frame via AppleScript or copy a timestamp that I could just paste into DEVONthink too but so far I haven’t found one with

Doing some more reading and searching, it seems like it would be best to not UI script the annotation but instead create or update the annotation file programmatically, looks like there are plenty of examples for figuring out how to do this so I guess my remaining questions are 1., 4., & 5.

Apologies for still figuring things out, since most of what I do has been webarchives and bookmarks in DEVONthink I’ve really never touched the annotations system before and a little prerequisite knowledge would probably have been more helpful before asking questions.

No worries and yes, UI scripting us fragile and not advocated by us in almost every case.

I’m in bed with a bad head cold so I’ll try to look at this tomorrow. (Yeah and still working. Bad work/life balance. I know. I know.

Thanks, that was the key attribute I missed earlier, that’s really helpful!

You’re welcome and thanks

If you’re willing, I’d love to hear about the solution you landed on while researching this. I, too, just discovered the back link and would love to take better advantage of it when annotating files.

So I haven’t yet worked on the annotation component or even playback in DEVONthink (I will though) but I did discover that VLC has AppleScript support and includes a current time properly (to the second). So I created a script that will take the current time from VLC, get the Reference URL for the current file in DEVONthink and copy a markdown link with it and the ?time parameter to the clipboard.

I’ve got a bunch more I want to do, adapt a rich text version. Do a pair of matching scripts for QuickTime (and see if any other players have the necessary AppleScript options). I’d also like to do a more complete annotations workflow and probably adapt them for Keyboard Maestro as well but I thought you might like to see or be able to adapt what I have now.

(My website is in-progress and not actually there yet. I’m also a monster who Pascal cases, soft-wraps and prefers tabs.)

Wow, this is amazing work! Unfortunately, I’m not much of a developer, but I love the direction of what you’re doing. I am curious though, why would you prefer this method over DEVONthink’s built-in “Insert Back Link” option in the given file’s Annotations section in the Inspector? 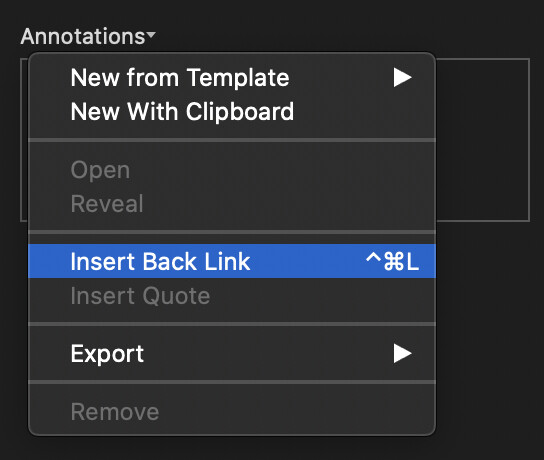 A couple of reasons:

This depends on getting a rich text link though for MindNode or other apps that accept RTF instead of Markdown, that’s what I’m working on now.

Not sure I understood what you want to do but maybe the handler in this post could be useful. It copies a Markdown and a RTF link. Depending on the receiving app’s preferred clipboard type one of both will be inserted.

Awesome, thanks for all that info! I’m excited to see what you end up with for all of these needs. Thanks for sharing.

That’s a really interesting solution, I’d been playing with textutil as the solution but wasn’t sure how to get it where I was going. I love the idea of having both formats on the clipboard though, that’s perfect!

The only thing I was really hoping to figure out is a way to copy the rich text with the link set correctly but with no font/styling so that it just matches the format of whatever I paste it into. Something along the lines of this.

I’m not sure whether it’s even possible to have rich text without styling though and if it is I’m not sure it’s something I could use textutil to generate.

I’m wondering if it might be possible using the other technique mentioned in the thread your handler linked to using ASObjC, do you have any thoughts on that?

The only thing I was really hoping to figure out is a way to copy the rich text with the link set correctly but with no font/styling so that it just matches the format of whatever I paste it into.

No idea whether that’s possible but I don’t think that one can create an attributed string without style attributes. If we don’t set them there’s probably a default used.

This script copies both types, RTF and Markdown, however I just realized that it doesn’t work with e.g. DEVONthink’s “Paste and match style” menu. No idea why, might be that it’s necessary to also add another type to the clipboard.

But I overread your hint with Shane’s HTML technique, I’ll try that later.

I’m not sure about that either, I actually just started a new thread over at Late Night Software’s forum to see if anyone else may have more insight into this, there seem to be a number of ways to get a rich text link but all of them include the styling, my guess is that I’m chasing something that’s not valid RTF but it sure would be nice to paste a link into a Rich Text field and not have to manually reset the styling or paste it as plaintext and add the link myself.

I’m not too concerned about getting it to paste correctly into DEVONthink itself, just about anything I put in DEVONthink is going to be Markdown, really, MindNode is my personal goal here, it’s smart enough to reformat something pasted in as a node but not in the node’s notes.

I’ll take a look at your script there in a bit.

I now read your thread, you could try to get data from your RTF string with another handler from Shane which I posted here some days ago.

I just realized that it doesn’t work with e.g. DEVONthink’s “Paste and match style” menu.

Hmm, interesting, that does take my string and encode it as rdat data okay but I’m not sure how to modify it to encode it as RTF.

Switching it to RTF this way

Doesn’t do it (rtf also fails). I’m definitely not understanding what’s actually going on with this stuff, it seems like I need to spend some time learning Apple’s Mac APIs and AppleScriptObjC — just a slightly larger scope than I was hoping to need for this project

Thank you for all your help and advise, I really appreciate it!

AppleScriptObjC is the greatest rabbit hole ever and there’s almost no documentation. You’ll find answers for Objective-C but once you think you’ve figured how something works BOOOM!, sorry, you can’t do that in AppleScriptObjC … If you get Shane’s book start with chapter 29. “Out of Bounds” - and keep it close