I’ve had for a good year now, a running local sync store through Nextcloud of Devonthink between two Macs. I looked at the options extensively and there seemed to be no reason not to do this and progressed based on that. However I see the below commentary from here which seems to indicate this is disabled. Would someone mind confirming please?

“The next maintenance release won’t open databases located in cloud-based folders anymore and will offer options to either reveal the database in the Finder or to relocate it to a safe location instead as too many users seem to ignore the warnings.”

I’ve been going mental trying to figure it out, the option to ‘add existing’ seems to be missing. I didn’t want to put my data in public cloud services, so I chose nextcloud. It’s always worked fine and now seemingly it’s disabled? If yes, what exactly is the technical reason why this is considered to be dangerous?

And assuming it’s disabled, it seems the only option is webdav which is a bit lame and a whole lot of extra work to set up seemingly for little benefit.

Your sync store in nextcloud is technically not a database; it contains the data but in a different format. The note you quoted refers to placing the database directly on a cloud server.

I’m not familiar with nextcloud, but if it’s working for you it should continue to do so (barring any change on their end that degrades the service.)

Also, that note is two years old and there have been several releases since, so any impact on your situation would have been obvious by now.

Putting a database, i.e. the .dtBase2 file, in a cloud-synced location is not data-safe. We don’t run NextCloud but if there is a syncing mechanism that is continuously syncing changes, I would caution you from putting the databases in it.

And yes, proper syncing via WebDAV would be considered the safest solution.

Hi thanks for the reply. Unfortunately webdav security is not good and thus I cannot in good conscience make webdav connectable over the internet, certainly not in an easy or seamless way. So I need another solution.

I assume when you say that solutions that are continuously syncing changes aren’t good, that this isn’t 100% correct as you have built in support for three of these systems (iCloud, dropbox and cloudme). So I’m left to wonder:

a) What technical thing is it that creates this issue and why is it OK for those three - (I’ve been in IT for 30 years, so please be fairly technical - I have a few ideas, but would like to hear it from you guys).
b) Why devonthink decided I wasn’t responsible enough to make sure my own databases are synced properly by disabling this (assuming it is disabled as you didn’t quite confirm that).

My whole system uses nextcloud as local based backup / sync, there is no other non-public option open to me and now I am left with a non-functioning devonthink because of someone else’s decision. It doesn’t make me happy (after recently paying to upgrade) to then find out this core capability is taken away. I would be far happier if there was an option to turn it on for edge use cases, with a ‘danger’ message associated.

And finally as a wild idea - nextcloud is a very popular open source document management system, so perhaps there’s something you guys can use in there for an improved sync experience internal to devonthink.

Edit, I just saw the post from @wmc wmc after @BLUEFROG which would seem to indicate that I have a different problem, that devonthink did not disable this, so I guess if that is true, I am still for some reason unable to figure out how to add a local sync store. I’ll make a copy of it for testing purposes and try elsewhere.

Apologize if I misunderstand, but it seems that you may not realize the difference between using a cloud location such as iCloud as a sync store location (which is supported, although some users seem to have problems with iCloud and Catalina), and placing a database directly on a cloud server, as Jim cautions against above. The first is supported, the second most definitely cautioned against.

Hi, thanks again for helping out with this. After posting my commentary above, I wondered if the iCloud sync etc used an API to run off to the apple servers rather than using the default local storage location of iCloud and this is what the difference was. Realising I hadn’t actually set up iCloud sync before (or the others) I thought this might be why one configuration works. However, what you seem to be saying above seems different again. You’re saying don’t place the database on a cloud server and do place on the locally synced iCloud sync store?

Nextcloud is basically the same as all the others, it has a local sync client and as such I’m trying to set it up to run from that local copy of the sync store. It’s greyed out so I assumed something had become unsupported from what I’d read - seemingly there is now no option to turn on ‘existing database’ when adding a sync location - I can create a new one in the same location, but can’t connect to an old one. Maybe it’s something else then - Catalina related perhaps.

So yes, I do understand the difference, but it was a good call out suggestion anyway.

I can’t speak to the internal operation of DT3 (@BLUEFROG would have to weigh in on this) but if I set up a sync store using iCloud in the DT3 Preferences–>Sync panel, it is not visible on my iCloud account including iCloud Drive, so I believe your thoughts above are correct.

You’re saying don’t place the database on a cloud server and do place on the locally synced iCloud sync store?

Aha, now we’re getting somewhere. I do believe I put both the sync store and the database on the nextcloud. E.g. for me, this is a direct copy. And I’m quite happy to run it that way as I don’t need simultaneous access of devonthink. I read up on it at the time and although I presumed not recommended it works well for me. I did used to just put it on a network share, which also worked well, provided I didn’t need mobility.

The issue comes down to backups. I don’t want my personal tax files etc etc in the cloud. I do want a backup.

So adding a bit more to this, my nextcloud (server side) is backed up by ZFS self healing file system, fully configured network snapshots, RAID’ed disks and an encrypted offsite backup. That’s where I want my files stored.

I’m still not certain if there’s a change in devonthink causing this, if I’ve forgotten how to add a sync store or if it’s something else to be honest though. But I was expecting to see an option ‘add existing db’ in the sync store setup because that’s what my online searching showed. Though I had to find that outside of devonthinks help, which is surprisingly sparse on specifics for this topic.

Thanks Bluefrog, so this is exactly as I understood it, I think I confused things by not specifying terminology correctly. Also, I didn’t have databases in the sync location, so that aligns. However, the answer to my primary question has still eluded me.

So using your good terminology above:

I’ve looked at your instructions here but it does not explain this.

I’ve just now done another search and found some further detail here which may be of help.

I’ll look into it, but can you answer, an I missing something above? Is preferences, sync the correct place to connect to an existing sync store?

Update, I’ve looked at your other post. It seems point 6 is not available to me. e.g

“On Machine B, select Import Database… from Preferences > Sync and follow the dialogs”.

Is preferences, sync the correct place to connect to an existing sync store?

Yes and we will look at rewording that message. If the store exists, it’s not actually rewriting it. Sorry about the confusion.

I was about to say my question wasn’t answered, had to read it a few times, I will try adding the sync store over the top since you say it won’t actually overwrite it as per the warning.

I think I will still make a copy just in case though!

Not a very nice message to be incorrect is it.

I’ve just done this again just now and I’m still getting this message. For some reason the sync store isn’t adding which combined with the message is pretty nerve racking. I would appreciate it if this could be improved in the future - it’s really not obvious.

Edit: It took a while for the database to ‘show up’ under the add sync store ‘after’ I chose the scary Replace button on my sync store. So now it’s working at least!

The easiest option to add a local sync store is to double-click on it in the Finder or to drag & drop it to DEVONthink. Afterwards you might want to check sync store options (e.g. and add the encryption key if necessary).

Thankyou, back here again after getting a new M1 Mac and deciding to set it up from scratch. That is definitely much easier!

For posterity, this is the really wrong scary message I get. It’s so wrong I’m actually doubting this is the correct message, because ultimately I didn’t click replace and instead used the method above by cgrunenberg. This really should be fixed, because if this is wrong I would have clicked it under the impression that I must do something wrong to make this work! How hard can it be to fix this?! 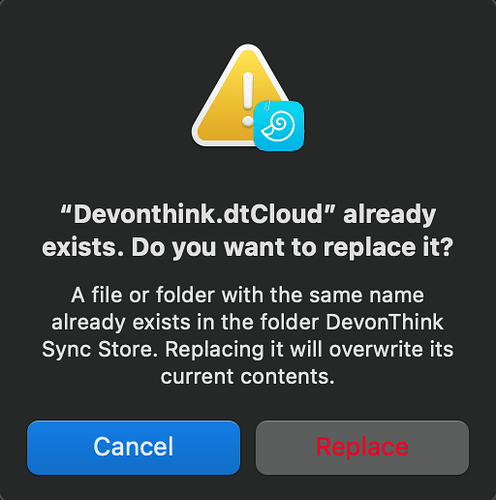