Zotero’s killer feature (at last competitively) is the ability to look up all manner of bibliographic information and attach it to every file in your research library. Pretty awesome stuff! In every other respect, however, DevonThink strictly dominates in every other substantively significant aspect of research workflow.

This raises a question! Can I run Zotero on my PDFs, generate the super useful bibliographical information and tagging, but still leave the tagged PDFs within the DevonThink ecosystem? So far as I can tell, the answer unfortunately is “no.”

Here’s a screenshot of the Zotero data generated by importing an academic paper into Zotero: 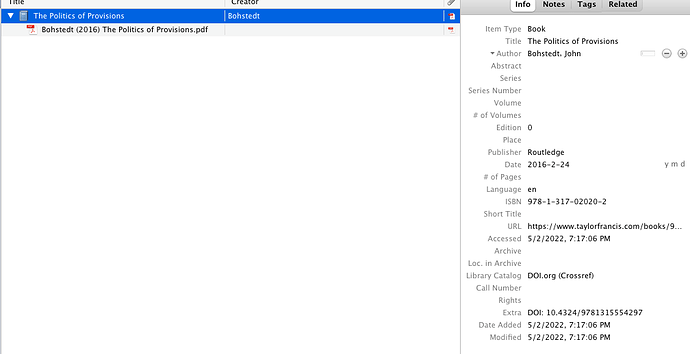 Now, I take that exact, newly-tagged-by-Zotero PDF and drag it into the indexed section of my DevonThink area. So the tags will come too, right? Wrong–when I look in the tags section of the DT inspector for the newly-indexed file, the result is bupkis–either under the “generic” tag inspector or under the “custom” tag inspector: 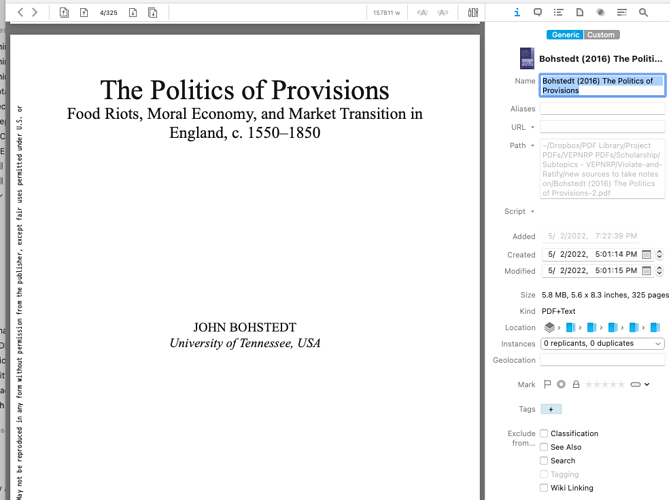 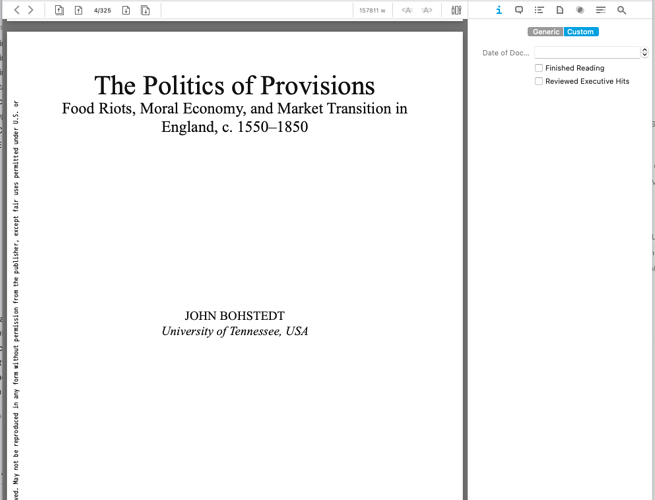 I’m guessing this is because Zotero doesn’t really tag the actual PDF; rather perhaps it associates the PDF with a meta-file that has the bibliographic information in a format visible only to Zotero itself? (At least, that’s what the screenshot of Zotero above suggests–a parent/child relationship between a document containing the information and the PDF itself.) But there’s enough celebration of Zotero as an open-source, profit-indifferent entity that I’m wondering if there’s some way I can capture the fruits of Zotero tagging from within DevonThink?

Any and all thoughts hugely welcome…

It’s smoke and mirrors in Zotero.

Look at the file in Zotero… 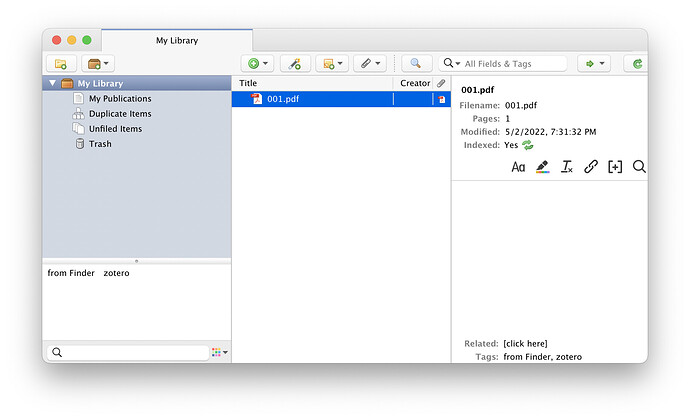 And the actual imported file in the Finder… 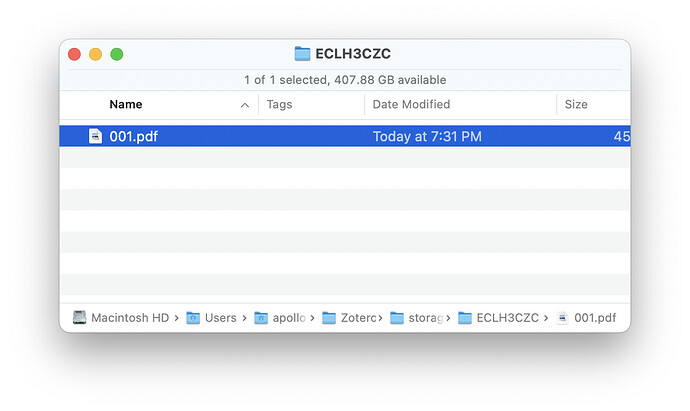 No tags have been applied to the file itself so no tags can be imported in the way you’re describing.

Note: Zotero doesn’t even export the tags when exporting the file… 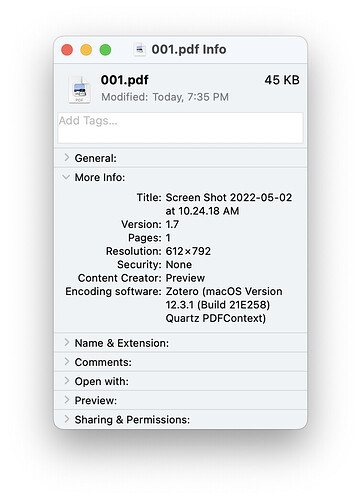 Nor does it apply tags / keywords as shown in Preview’s inspector.

Is that…are you…did they… are you telling me the whole thing is an internal sandbox situation not just in relation to the tags but right down to the impenetrably named folders that your PDFs go in??? Sweet sassy molassy … why??? They’re not even trying to crowd out other competitors via NON-interoperability, the whole point is open source???

I guess all I can do is go back to my first reaction, Jim: Oh. Em. Gee. I had no idea–and will keep Zotero at the end of a 20 foot pole from now on…

It’s all in the Zotero database. And last week I had to reinstall my OS, and there is just no way of getting Zotero to connect to the database as I hadn’t created a Zotero-generated database backup. So I have the pdf, but no notes, metadata. Bye bye Zotero, I am doing it in DevonThink from now on. I am still using ZoteroBib to capture some metadata into DT.

And it’s not like the database was corrupted, there is no programmatic mechanism to re-connect to a database.

On the other hand, all my keywords and much more that I apply in Adobe Lightroom happily get moved to DevonThink with 1 keystroke.

jeez louise it’s almost like people decided to be sensible and get together to create an app called… DevonThink : )

Since it’s a cross-platform app, it’s not as surprising a situation. When building cross platform apps, the frameworks used often lack features of a particular OS. Also, there is no global standard for metadata, though I suppose they potentially could have implemented XMP for PDFs. And I can’t speak for their perspective but making inter-application communication powerful and simple isn’t a top priority for some teams.

Do note some people have contributed scripts to have some interaction between Zotero data and DEVONthink.

I spent a lot of time helping faculty move data from one bibliographic app/reference manager to another. That and my own frustrations with EndNote, Zotero, Mandelay, Bookends, etc. and the difficulty of moving data between or out of them has me using a Numbers spreadsheet since c. 2010, which DevonTHINK easily indexes as a tab delimited file. I haven’t tried indexing the Numbers file itself (I am brand new to DevonThink) yet, but will.

We’re happy to hear you’re finding use in DEVONthink!

Note: You can index Numbers’ files and even do a toolbar search for text in them. However, there won’t be search hits displayed when you select a found file as the display is merely a QuickLook view. However, using the Search inspector on the file will show hits in the raw text of the file. 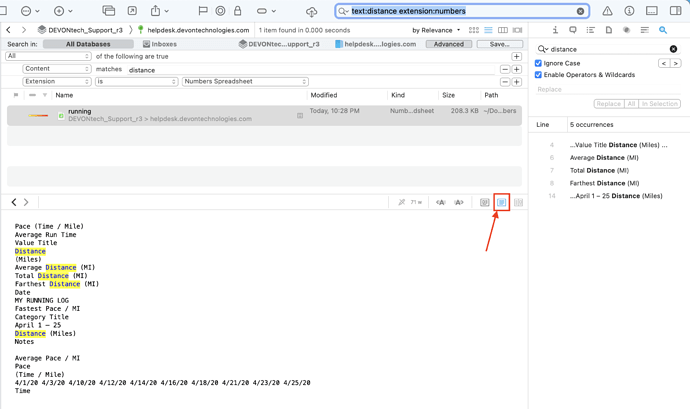 On the other hand, all my keywords and much more that I apply in Adobe Lightroom happily get moved to DevonThink with 1 keystroke.

I guess that they use IPTC/EXIF metadata that are stored in the file itself or in an XML companion. There’s no such standard for PDF. Or rather: there’s only a limited number of metadata that can be stored in a PDF.

Zotero’s killer feature (at last competitively) is the ability to look up all manner of bibliographic information and attach it to every file in your research library.

A script to download GoogleBooks metadata based on GoogleBook ID, ISBN, or record’s name. Inspired by the “Download DOI Metadata” script. Tuned for my setup, of course. It generates a tag per author, for example.

Script to look up PDF document metadata on crossref.org Automation

I hate AppleScript. Really hate it. But I love Devonthink, and had an itch to scratch. This is somewhat similar to other scripts that do bibliographic lookups, but it uses crossref.org. Feedback, etc. welcome.

Since about 1993 I have used Endnote, Papers, Sente, Zotero, Mendeley and perhaps some others I have forgotten. The one program I have stuck with is Bookends. It works very well with DEVONthink. You might find it worth trying.

Edit: I recently discovered Research Rabbit, which I find very interesting. Also worth checking out.

I am a Bookends fan too. I could envision doing what you’d like to accomplish using Keyboard Maestro, Hazel and Bookends.

There are several moving parts to my workflow, but the interplay between Bookends and DT is crucial to its functionality. I don’t tag the pdf files, but they are renamed by Bookends to keep everything in sync. I also export abstracts using the Bookends script in DT, so the correct pdfs, abstracts and annotations bubble up in DT together. 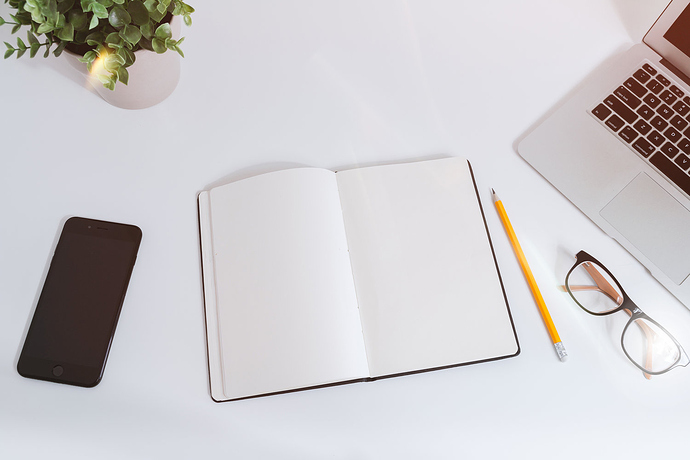 One of the most popular entries on WIPPP has been my 2015 Writing Workflow. My workflow has changed substantially over the last several years. I thought I'd share what I'm currently doing.

That is why I use Paperpile. Check it! You can index all PDFs in DT and have the best of two worlds: a powerful bibliographic manager and one powerful document manager!

Only works for Chrome

I gave up Chrome long ago as it was slowing my Mac dramatically. Safari & Firefox now.

Paperpile is a web service, not a Mac app. The iOS app looks like it’s just a front end to the web service as well.
If it suits your expectations, enjoy! 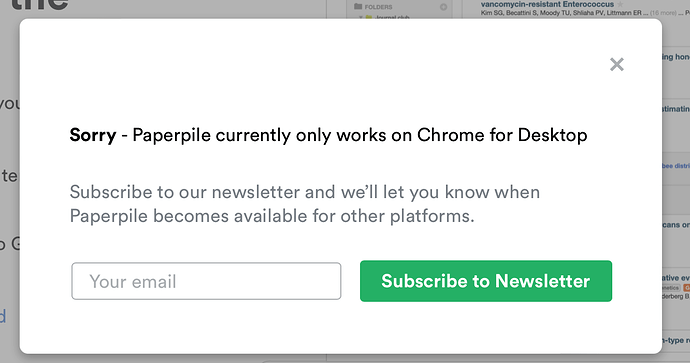 You’re better off without Chrome